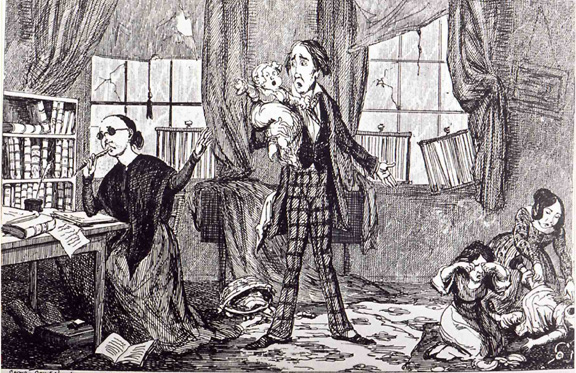 Popular 1846 cartoon, entitled "My Wife Is a Woman of Mind"


Book love too was soon caught up in all this nervous preoccupation with gender. For centuries books had been friends and fellows, men’s minds and souls immortalized in paper and leather bodies. But by the 1830s or so, talk subtly shifted from books as men to books for men. Bibliophiles continued to regard a book’s text as masculine, even when the author was a woman, but they increasingly characterized the book itself as feminine. Content was aligned with “masculine” traits of intellect and reason, while form, perceived sensuously, embodied “feminine” traits of silence, service, and above all beauty. This opened up a whole new way of understanding the nature of the physical book and an owner’s relationship to it.

Distinguishing a text from a book in terms of masculine “mind” and feminine “body” did more than invoke traditional stereotypes. In an age when women outnumbered men as readers but actually owned far fewer books than men, in part because a woman’s property became her husband’s upon marriage, the distinction also emphasizing books as property. Bibliophiles rendered their books subordinate feminine bodies much like marriage laws subordinated wives to husbands. A familiar power dynamic seemed clear: Texts, regarded as masculine, exercise power over readers—especially women readers—while book owners—more likely to be men—exercise power over their (feminized) physical books.

The bustling if illicit trade in nineteenth-century pornography and erotica affirms that men too certainly experienced the powers of text. But the erotic implications of the first part of this power equation focused entirely on women. The notion that women could be overcome by suggestive texts was an old one, long tied to fears about the hidden, interior nature of both female sexual experience and imaginative reading. Images of a woman reading privately, presumably a clandestine novel, often rendered the sensuality of her experience explicit. Shadowy but unmistakable is the experience of this reading woman shown in illustration 6, for example. The book, purportedly a French novel, is being slipped to her by the devil. The motif of a woman “lost” in emotional surrender to a text abounds in eighteenth- and nineteenth-century visual art. Importantly, the images make clear that the seducer is the text, not the book itself.

But bibliophiles loved books not simply as womanlike objects but even as companions, alternatives to human women. To many, books achieved the Victorian feminine ideal better than most women could have possibly done. Few real women could be counted on to wait silently and patiently at all hours for the possibility of a moment’s attention, utterly deferential to the whim or caprice of her “master.” Few real women yielded seductive caresses one moment and learned discourse the next. And while real Victorian women were often thwarted by an oppressive divergence between sexuality and respectability, the feminized book offered an unthreatening unity of domestic and sensual pleasure. In short, the fantasy of a steadfast beautiful beloved enthroned in the home was much easier to achieve with books than with real women.