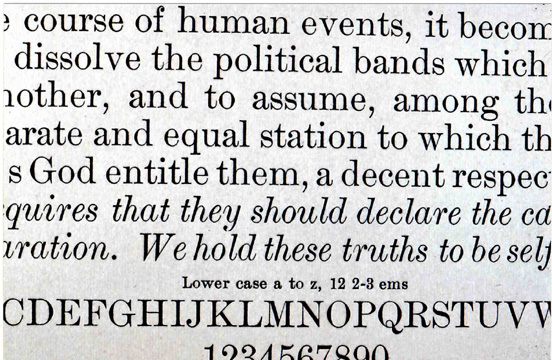 
Significantly, machine-made books were physically different from those printed in preceding centuries. Before industrialization, the majority of books produced were considered “serious”—that is, their content was anything except contemporary fiction—and they generally bore a highly traditional, subdued typographic style. They were printed on enduring rag papers, and bound by hand according to owners’ instructions, as had been the custom for centuries. Issued in relatively small editions, these were the costly and elegant books that lined the traditional gentleman’s library walls. This preindustrial style of bookmaking seemed synonymous with serious, important books intended for traditional gentlemen readers.

Victorian machines yielded books as likely as not to be fiction. By mid-century newly published books were usually sold ready-made, already bound. Printed quickly on cheap and plentiful machine-made papers, most were destined for a probably short, hopefully splashy, life along the bustling railroad platforms and in the circulating libraries, not the hushed eternity of an aristocrat’s library. Printed covers of the least expensive paperbound books shamelessly advertised their wares, forever fusing cheap physical form with dubious content.

Bibliophiles left no doubt about which kind of books they loved, or why. To many, “serious” book culture, not to mention a well-ordered society, seemed in danger of drowning in a flood of mass-produced popular books. In the 1880s, these fears helped to galvanize ardent new interests in traditional bookmaking crafts. William Morris’s Kelmscott Press and others launched a “fine printing” revival of preindustrial typography and book crafts. Above all, the revival called fresh attention to the material book as an object of beauty, dignity, and cultural import.

This now-famous revival is usually hailed for courageously resisting the industrial and commercial deterioration of modern bookmaking standards of aesthetic and material quality. But I’m convinced that the new fine book served other agendas as well. After all, the term fine made sense only in contrast to the machine-made ordinary. In no small part, fine editions were meant to register difference, and especially eliteness. A “limited” edition size soon became the defining feature of the fine book. The ensuing boom market in limited editions, including those that were only vaguely “fine,” repudiated everything ordinary and common; that meant not only the mass-produced popular books of the day but also those who read them. By resurrecting preindustrial book forms with heavily freighted cultural associations, fine printers distanced the serious book from the marketplace forces that threatened to cheapen, vulgarize, and feminize it.

In 1892 Theodore Low De Vinne, America’s leading printer, hailed Morris’s reform as a long-overdue return to "masculine printing." He deplored as effeminate, weak and fussy the standard typography and bookmaking of the day. In De Vinne’s mind the chief villains were ornamental types and the most commonly used text typeface of the century, simply called "modern." Modern type featured a relatively small surface area, pronounced contrast between the thick and thin strokes, and very sharp, hairline serifs. The sharp, thin forms of modern type were well suited to the thinned inks that enabled the machine presses run efficiently. The result was a page that De Vinne ridiculed as "weak and misty, thoroughly feminine." He applauded Morris’s Kelmscott types because their heavier weight and closer fit would bring plenty of black color to the page and deliver a firm impression when letterpressed into good papers. De Vinne felt this would restore "virility" to the printed book.