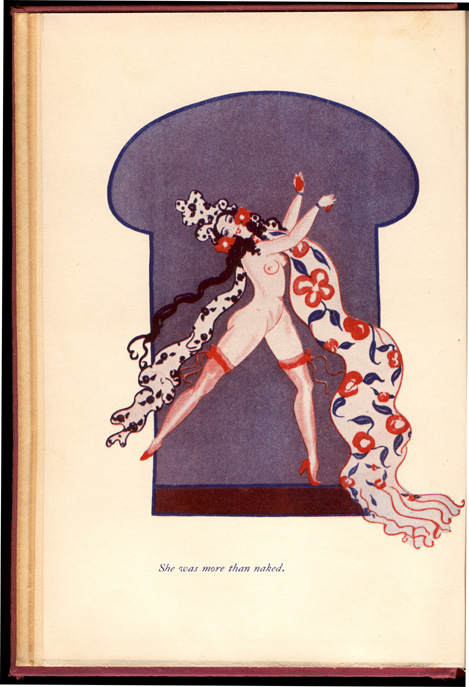 
To return to my opening questions, why did many men go gaga over books in the nineteenth and early twentieth centuries? Although of course the question deserves more nuanced and developed answers than this tidy overview suggests, I believe that gendered bibliophilia was sparked by anxieties about preserving men’s place in the world of books just as women seemed to be taking over it. The fine formats and erotic content of the books I’ve described well distanced their owners from the increasingly “feminized” moral and cultural climate of the era. Such books were destined for private libraries, those domestic inner sanctums that, as booklover Oliver Wendell Holmes boasted, “no housewife hand profanes.”

Yet there was an important social dimension to fine books as well. The prominent limited edition statements signaled that ownership admitted one to a small community of like-minded, like-privileged others. On both sides of the Atlantic a number of exclusive book clubs were founded between the 1860s and the 1920s, and many continue to flourish today. Most of them limited membership to bibliophiles of means and taste, and to men. A few exclude women to this day. A 1929 ad for the Limited Editions Club, which was a wholly commercial and highly successful exploitation of the “club” concept, brazenly promotes both the gentlemanly camaraderie and the cultural status that fine editions promised.

Just as the library was often the last domestic territory not controlled by feminine taste, so I think many men implicitly regarded their fine editions as sanctuaries where they might enjoy traditional patriarchal privileges and the pleasures of “feminine” company without encountering actual women. John Austen’s illustration in a 1929 fine edition of Norman Douglas’s South Wind offers a parody of this elite male book culture, with its absurd abundance of nude figures—on the wall, on a pedestal, in the garden, and on the table in the foreground (beneath a magnifying glass), interspersed with books. Austen slyly mocks what I see at the heart of gendered book love—that for many bibliophiles, owning elite or fine books became a sexualized metaphor for patriarchal possession of and mastery over “Culture” itself.

It seems fitting to let besotted book lover Eugene Field have the last word. He constructed a fantasy in which all that men needed—emotionally, intellectually, and sensually—was gladly provided by silent, loyal, beautiful books. Field envisioned a special paradise for men and their beloved books, exulting that

The women-folk are few up there,
For ’t were not fair, you know
That they our heavenly bliss should share
Who vex us here below!

In heaven, at least, Field hoped that women could be dispensed with once and for all.