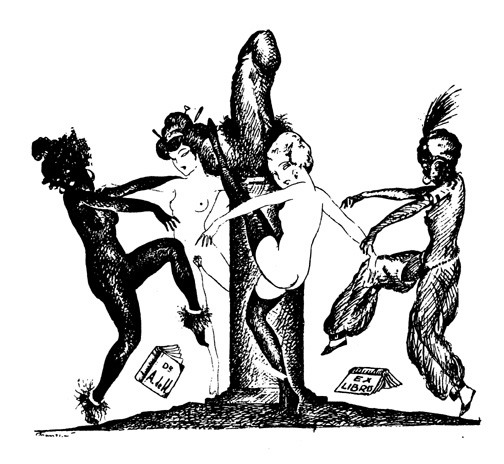 
If a book’s binding was understood as skin or clothing, moving inside the book triggered erotic implications as well. Book lovers often spoke of the search for a book they desired to own as ‘wooing” or seducing it. When they were finally able to secure it, the moment of conquest, or ownership, was charged with sexual overtones when it involved the first opening of the books’ pages, or cutting apart the folded edges that remained after printing—another hallmark of preindustrial bookmaking that the Bodley Head and other fine publishers deliberately preserved to distance themselves from industrial mass production. Opening a book’s pages took on ritualistic meaning to even the most jaded bibliophile; as French writer Theophile Gautier shrugged “It is a virginity like any other, and that is always a pleasure to take.” For most, the occasion prompted rhapsodies, or, as another confessed when he used only his bare forefinger, “a kind of savage joy in the havoc I was making.”

Once inside the book, one encountered of course the pages. These obviously served to present the content. Yet this familiar function was complicated and even rivaled by the new aesthetic sensibility. A book was meant to be read, yes, but a fine book was also meant to be beautiful, an object of art and pleasure. When applied to page design, this mandate either disturbed or thrilled readers. For example, most fine editions featured exceedingly large margins, sometimes as much as a third of the page’s height. When margins are this exaggerated, their usual function of serving legibility is completely eclipsed by their role as art. They help define the book as an elite object, presenting to the hand and eye expanses of luxurious handmade paper. Such extravagant margins scandalized and enthralled many contemporaries. As the margins grew ever larger and the text seemed to recede from the page, some drolly noted that the ultimately beautiful book would have no print at all. One book lover wryly suggested to Oscar Wilde that he should “publish a book all margin; full of beautiful unwritten thoughts” not printed on Japanese paper and bound in Nile-green leather. Wilde agreed, stipulating that “there must be five hundred signed copies for particular friends, six for the general public, and one for America.”

The blank page has long resonated with erotic overtones. One bibliophile likened a book’s silk pastedowns and broad margins to silken underclothes and “soft and coaxing” bare shoulders. In an illustration of J-K. Huysmans’s novel Against Nature a decadent young aristocrat turns to the vast blank pages of a large folio in his search for sensual pleasure, his splayed fingers spread greedily across the verso page. Note the paintings on the wall, both images of nude women with their arms thrown up over their heads in vulnerable postures. Throughout bibliophilia blank pages and margins are often regarded as nudelike feminine space, a beautiful passive surface to be gazed upon and caressed by a connoisseur and to be given meaning by an author, artist, or reader.