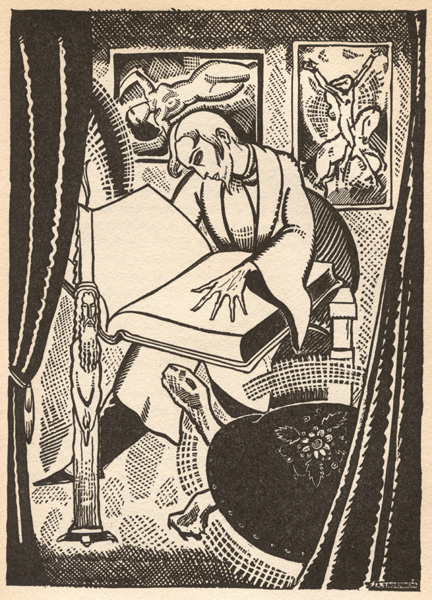 Illustration by Arthur Zaidenberg for a 1931 edition of J-K. Huysman's Against Nature


In his illustrations for a fine edition of Pierre Louÿs’s Collected Stories, British artist John Austen captured well the decadent fusing of woman as both aesthetic object and creature of raw nature. In the story called “A New Pleasure,” an eternal Venus-like goddess suddenly appears in a man’s Parisian apartment. She boasts of the exquisite sensuality of ancient times, reveals her beauty to him to prove her claims, and challenges him to show her if moderns had improved upon what the ancients had perfected. In the first image, she stands as rigid, sleek, and curved as the white porcelain vase of tulips in the foreground. The art on the wall behind her left shoulder recedes into a cloudy blur. Three pages later, Austen depicts the post-coital goddess. Rendered now in harsher, black only lines, she is disheveled, her form bent in a more natural lumpy shape. The artwork over her shoulder appears in sharp focus, a faceless nude female torso.

In the other major strain of modern elite books sensual content was cultivated in a different direction. Much closer to the uninhibited view of nudity and sex seen in bookplates of the time, this vein took an enlightened, idealistic stance toward sensuality. Texts and illustrations were frequently classically simple and graceful, with none of the brittle, even savage cynicism found in their decadent counterparts. Favorite texts included Solomon’s Song of Songs, which invited lyrically erotic art, and classic love tales like Daphnis and Chloe. The work of Pierre Louÿs also inspired dozens of fine editions in this more idealized manner. Most notably specializing in this vein was the English Golden Cockerel Press. Its second owner, wood engraver Robert Gibbings, cultivated this lucrative niche when he bought the press in the mid-1920s. Virtually all Golden Cockerel editions were beautifully designed and produced. Gibbings typically selected classic works of literature that offered opportunities for sensuous art, and he often illustrated them himself—as in editions of Keats’s Lamia and Other Poems and Milton’s Paradise Lost

The defining artistic force during these luminous years for the press, however, was Gibbings’s close friend Eric Gill. Gill’s deeply spiritual views of the supreme centrality of the erotic helped shape the direction and reputation of the press. “The beautiful thing is that which being seen pleases,” Gill insisted, and “nothing is more pleasing than the nude human body.” His 1925 illustrations for the Song of Solomon express his philosophy so thoroughly that it either scandalized, or thrilled, its first viewers. Many regard the 1931 Golden Cockerel edition of the Canterbury Tales as the greatest expression of the Gill-Gibbings collaboration. It featured an abundance of Gill's nudes draped languorously around the half title and occasionally snaking up the margins of a page.

After Gibbings sold the press in the early thirties, its new owners continued and deepened the Golden Cockerel reputation for elite erotic books, hiring many of the leading artists of the day to illustrate fine editions of classic works of literature. John Buckland Wright, who illustrated many titles, expressed the press’s approach to its work when he wrote that “eroticism is not in what is drawn but in the way it’s drawn. A restrained and full-blooded eroticism is infinitely more expressive and suggestive than any amount of obvious stuff.” As this emphasis on tasteful restraint suggests, Golden Cockerel books were the most clearly fine of all the editions I’ve described. Their impeccably worthy texts, illustrations by prestigious artists, and genuinely fine production ensured their reception as Art, a context both affirmed and exploited by their eroticism.