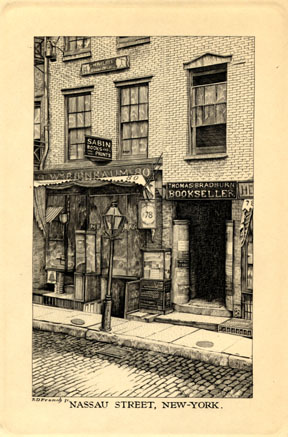 When the bookseller and bibliographer, Joseph Sabin, succumbed to overwork, "Killed by a Dictionary" was suggested as his most fitting epitaph. He was a strong advocate of total abstinence, and in his younger days wrote and lectured upon the subject of temperance. He practiced what he preached—water pure and simple was his exclusive beverage, and he eschewed tobacco in all its forms; but in point of mental activity he failed to exercise a corresponding degree of moderation. To the cares of a considerable business in the importation and sale of books he added the labors of a publisher, the drudgery of compiling catalogues, and the arduous calling of a book auctioneer, and then took upon his broad shoulders a literary burden of indefinite proportions in his "Dictionary of Books Relating to America."

This indefatigable worker in the twin fields of bibliography and bibliopolism was born in 1821 in Branston, Northamptonshire, England, and at the age of fourteen was apprenticed to Charles Richards, an Oxford bookseller and stationer. Two years after the completion of his seven years' apprenticeship he married, and in 1848 emigrated to the United States, arriving in New York on July 3d. He established himself at first in Philadelphia, and purchased a farm of thirty acres at Chestnut Hill, which would have greatly enriched his heirs if they had retained possession of it until the present time.

In 1850 Mr. Sabin removed to New York, and was connected for a time with the well-known book auction firm of Cooley and Keese, where he was principally employed in preparing catalogues of the better class of books. In the panic year of 1857 he returned to Philadelphia and engaged in business as an importer of fine books. At the outbreak of the Civil War he lost many of his customers, and again sought to retrieve his fortunes in this city. He opened first a book auction-house, and then a bookshop in Canal Street. Again he returned to his farm and began work upon his “Dictionary of Books Relating to America from its Discovery to the Present Time." A year or two later found him once more in New York in the employ of the Riverside Press publishers, Hurd and Houghton. In 1864 he ventured into business on his own account, and purchased for $9,000 the stock and goodwill of Michael Noonan, a genial and popular Irishman who had built up quite a respectable business in second-hand and new books. From No. 84 Mr. Sabin removed to 64 Nassau Street, where he continued in business until his death. Nassau Street from John to Beekman was then the “Rialto" of the old book trade, and the place where book-hunters most did love to congregate.

Mr. Sabin's sales in the ten years from 1864-74 aggregated over $1,000,000, and during this period he supplied with some of their choicest treasures many of the public and private libraries then in course of formation; among them those of Almon W. Griswold and William Menzies, of New York, and Henry C. Murphy and T. W. Field, of Brooklyn. The two most prominent American collectors of the first half of this century, John Carter Brown, of Providence, and James Lenox, of New York, had nearly ceased their purchases when Mr. Sabin came to New York, and he supplied them with comparatively few books. Rare Americana were Mr. Sabin's specialty, and several of his customers were advantageously influenced by him in turning their attention in this direction. Many of the books which these fortunate individuals procured through him have become, so far as booksellers are concerned, simply fondly cherished memories. What book-hunter dreams nowadays of finding in a book-stall such nuggets as the first New York Directory, the first edition of Andre's "Cow Chase," Symmes's "Late Fight at Pigg-wacket," or a copy of Hariot's "Virginia," the rare English De Bry, which was sold to Mr. Kalbfleisch for $1,250, a long price in those days, but a short one in this year of grace 1895. Mr. Sabin published a facsimile of this excessively rare book.

Rarities in the way of English literature were by no means neglected by the bibliopole of 64 Nassau Street, although the present fierce demand for first editions of early English writers was still slumbering. The set of five Waltons sold in this city within a few months came, I believe, from Sabin's, and the first alone brought more than two and one-half times as much as was originally paid for the set. Several copies of the first folio Shakespeare passed through Mr. Sabin's hands, including that of Sir William Tite; and the early Chaucers, Miltons, Ben Jonsons, Spensers, and Drydens, now sought for with so much eagerness by book collectors, were far from being strangers to the shelves of his bookshop.

In those days there was on the part of book-buyers, both here and abroad, a tolerance of big books, which no longer prevails to the same extent. The "Musee Francois" and "Musee Royal," Robert's "Holy Land," Boydell's Shakespeare, Hogarth's works, and the whole long list of elephantine folios were staple articles in the secondhand bookshops. In "extra-illustrated" books the same preference for folios and large quartos was manifested, obviously because they permitted the insertion of large prints, and so widened the "extra illustrator's" field of selection. Bibliomania in this form may be said to have reached its culminating point during the period of which we write.

An English dame of those days greatly distinguished herself by "extra illustrating" the Old and New Testaments at a cost, we were informed, of over £10,000, not including the expense of the book-case, or book-room, whichever it was, that was found necessary to contain this monument of enthusiastic Grangerism.

The sale by the founder of the house at an early stage in its history of an "extra-illustrated" Shakespeare for $3,000 is one of the never-to-be-forgotten reminiscences of Joseph Sabin and Sons.

The publications of Mr. Sabin, aside from the Dictionary, were a monthly magazine called the Bibliopolist: A Literary Register and Repository of Notes and Queries, etc., begun in 1869, and continued until April, 1877; "A Bibliography of Bibliography; or, a Handy Book about Books which Relate to Books"; and a series of American reprints, ten of which were issued in quarto size and seven in octavo; large and small papers were made of each. It was the day of privately printed books and "large papers" (not necessarily large books because they were large papers), books which have been aptly described as "mere rivulets of text in a meadow of margin." A reprint, in three volumes, of Garden's "Anecdotes of the Revolution" published in three sizes—ordinary paper, large paper, and what Mr. Sabin dubbed "blanket folio "—capped the climax in these typographical absurdities, and brought them into merited disfavor. They, however, reappeared later disguised under the name of Editions de luxe.