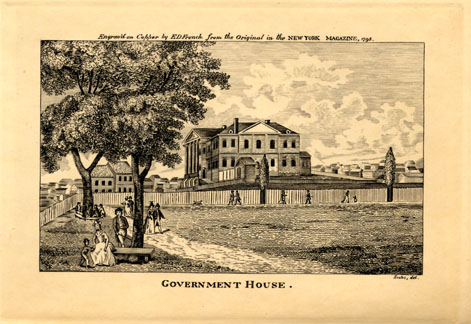 In one of the notes with which his catalogues are interspersed, and which bear the singular nom de plume of "Western Memorabilia," Mr. Gowans informs us that in 1847 he met the "venerable widow of Alexander Hamilton, and took the opportunity of making several inquiries of her regarding Washington, which met with ready and satisfactory answers." He noted that her eyes still possessed their youthful brilliancy, although her other features showed all the marks of extreme old age, as she was then nearly one hundred years old.

Mr. Gowans states that he frequently came in contact with John Howard Payne, and that he impressed him as a melancholy, despondent, heart-broken man. The last time he saw the poet was on the eve of his departure on his mission to the Barbary States. He said he had had great difficulty in procuring his appointment, and was compelled to bear his own expenses in repairing to his post of duty—the Government having refused to defray them. Mr. Gowans foretold correctly, that notwithstanding all the songs, dramas, newspaper and magazine criticisms, and biographical sketches Payne had written, posterity would know him only by his single song of "Home, Sweet Home."

MacDonald Clarke, "the mad poet," was a daily visitor at Mr. Gowans's store for more than twenty years. “He appeared," says Mr. Gowans, "to have the simplicity of a child, the innocence of the dove, but none of the cunning of the serpent. By nature a poet, but wanting cultivation sadly; nor would he read Shakespeare or Milton, nor any of the great poets, 'lest,' said he, 'I should spoil my own originality.'"

From Mr. Audubon, the author of " The Birds of America," Mr. Gowans received the following account of his unfortunate experience with his monumental work: " I did not sell more than forty copies of my work in England, Ireland, Scotland and France, of which Louis Philippe took ten, and offered to subscribe for a hundred if the work was published in Paris." The following subscribers received their copies, but never paid for them: George IV., The Duchess of Clarence, The Marquis of Londonderry, The Princess of Hesse-Homburg; an Irish Lord (whose name Audubon could not give) took two, and paid for neither- the same could be said of a wealthy citizen of the United States. Audubon further stated that he sold only seventy-five copies of his book in America (twenty-six of which were sold in New York and twenty-four in Boston); that the work altogether cost him twenty-seven thousand pounds sterling, and that by it he lost twenty-five thousand dollars.

When Edwin Forrest first appeared upon the boards of the Bowery Theatre, Mr. Gowans was connected with that institution in a minor capacity, and enjoyed the opportunity of seeing him act nightly. In 1865, thirty-five years later, he saw the tragedian again, in “Richelieu" and "Hamlet," and declared, that as an actor he pleased him better in 1830. "Nevertheless," he states, "his popularity appeared undiminished, and at all the performances the theatre was literally crammed from roof to foundation."

Shortly after the first arrival of Fanny Kemble, Mr. Gowans witnessed her performance at the Park Theatre, where immense crowds flocked to see her, and declared that she was '' matchless as an actress, and divine as a young and beautiful woman." Fifteen years later Mr. Gowans saw and heard her again in the New York Tabernacle, at Broadway and Worth Street, and found that she had grown stout and unattractive.

Mr. Gowans devotes much space in his "memorablia" to that singular character, Eleazer Williams, the reputed lost Prince of the House of Bourbon, son of Louis XVI., who was said to have been committed to the care of some unknown person, and by him either carried or sent to America and consigned to a certain tribe of Indians in the western part of New York State, who adopted him and brought him up in their wild habits and customs. By some means he obtained a good education, and after due preparation was ordained by Bishop Hobart, in 1826, and as a minister of the Episcopal Church passed the best part of his life among the Indians. To Mr. Gowans he appeared to have a striking resemblance to Louis XVI as represented by the engraved portraits that he had seen. "Large, massy, full face, aquiline nose, dark eyes, swarthy complexion, heavy, corpulent frame, and he spoke in slow, solemn tones." Dr. John W. Francis, the well-known physician, and a recognized authority on old New York and New Yorkers, was acquainted with Williams for half a century, and he also thought he looked very like a Bourbon. But there have been no less than thirty pretenders who from time to time have posed as the ill-fated Dauphin. Mr. Gowans once asked Eleazer Williams his own views upon this matter. His reply was that "ambition, worldly pride, vanity and notoriety would seem to prompt his carnal mind to adopt the view that he was the actual heir to the French throne; but again," he said, "Christian humility and a consciousness of my position forbid me to entertain such worldly and ambitious views. I therefore have left the whole subject to those who feel any interest in such discussions, to make of it what they may." This is a method of unburdening one's conscience which recalls the story of the artless maiden who, having decided that her fine gowns were leading her to perdition, generously bestowed her entire wardrobe of ball-dresses upon her dear sisters.