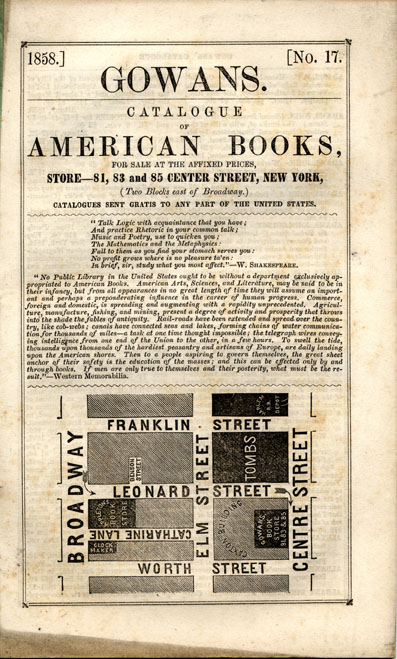 
For eight months Mr. Gowans lived in the same house with Edgar Allen Poe. He tells us that he "saw much of and often had an opportunity to converse with him," and he testifies that he never saw him in the least affected by liquor or knew him to descend to any known vice, while he was one of the most courteous, gentlemanly and intelligent companions he had ever met with. His wife he describes as of matchless beauty and loveliness, and of a temper and disposition of surpassing sweetness, and he quotes these fond lines of Poe addressed to her:

"But our love it was stronger by far than the love
Of those who were older than we,
Of many far wiser than we;
And neither the angels in Heaven above,
Nor the demons under the sea,
Can ever dissever my soul from the soul Of the beautiful Annabel Lee."

In a note covering more than two pages of his catalogue, Mr. Gowans claims to have been instrumental in giving the New York Herald its start in life. Dr. Benjamin Brandreth, the renowned pill-maker, made Mr. Gowans an agent for the sale of his pills, and wishing to give them as wide an advertisement as possible, consulted him as to the best paper for his purpose. Mr. Gowans suggested the New York Herald, which had lately begun its career. Dr. Brandreth went to Mr. Bennett, made terms with him for advertising, and for a long time paid him a considerable sum weekly for the use of his columns.

Mr. Gowans frequently met Fitz-Greene Halleck, who was then keeping accounts in the private real estate office of John Jacob Astor, and only occasionally indulging his poetic vein, because, as he is reported to have said, being under the necessity of earning a livelihood, he could not afford to incur the adverse criticism aroused thereby. He had already more reputation as a poet than was good for him in the esteem of men engaged in business pursuits. The old New England theory that a genius must necessarily be deficient in common sense, and nigh worthless as a business man, is not yet entirely abandoned in this commercial community. Mr. Gowans covers more than two pages with reminiscences of the poet; but they contain little that is new of interest in relation to one of the most graceful writers of verse that ever made our city his adopted home.

Another well-known character who frequented the old book shop was that indefatigable collector of books and "auld nick-nackets, Rusty aim caps and jinglin' jackets," John Allan. He haunted it daily. After the sale of Mr. Allan's effects in May, 1864, Mr. Gowans published a price list of the articles sold, with the names of the purchasers. From his introduction to this pamphlet we abstract the following paragraphs:

"I had the happiness, as well as the good fortune, to have been intimately acquainted with him (John Allan) for over twenty-five years. During that time, and long before, it was his steady, constant and persistent aim to be adding to his unique collection by all means within his reach. On many of these occasions, after having secured a new accession, he would come tripping into my store, with a foot as noiseless as that of Grimalkin, and spirits as buoyant and joyful as a youth let loose from school.


* * * * * * *
"It would be out of place to enumerate the principal articles, with a history of their peculiarities, for that would take a volume much larger than the catalogue itself. I will, however, mention the four which he prided himself most in possessing, namely, the folio containing the three hundred portraits of and views relating to Mary Queen of Scots; George Withers's Book of Emblems; Elliott's Indian version of the Bible, and the Kilmarnock edition of the works of Robert Burns.


* * * * * * *
"Inasmuch as no collection like that of Mr. Allan's for intrinsic value and unparalleled rarity has heretofore been offered for public competition in America, it will form an epoch in the history of the sale of literary, artistic and antiquarian property in the United States, and will in some measure test the popular taste for collecting such heir-looms."

The test proved eminently satisfactory. The sale was an unqualified success, and one that could not be repeated today. Our book collectors have become too knowing and fastidious, and Mr. Allan's books were not, as a rule, in superlative condition.

In an irregular fashion Mr. Gowans's catalogues are thus interspersed with notes of a more or less interesting character. They are not, however, so voluminous as at a first glance appears, as the same notes are made to do service over and over again.

Urbanity of manner was not one of Mr. Gowans's prominent characteristics, but he could be genial and communicative when in the humor, and with those who had won his esteem and confidence. He seems to have entertained no feeling of rivalry toward his brother bibliopoles. In one of his notes he refers most pleasantly and in highly complimentary terms to his neighboring bookseller, Joseph Sabin, of whose knowledge of books he justly entertained a high opinion.

Mr. Gowans issued in all twenty-eight catalogues, the first in 1842, and the last in 1870, the year of his death. The later ones were carefully compiled and neatly printed on good paper at the press of Joel Munsell, the well-known Albany printer, in his day one of the leading typographers of the country. In 1833 Mr. Gowans added to his other "literary business” that of publisher, his first venture being “Phaedo; or the Immortality of the Soul," by Plato, translated from the Greek by Charles L. Stanford. His second book was "The Phoenix," a collection of old and rare fragments, viz.: "Morals of Confucius," "Oracles of Zoroaster," etc. In addition to the foregoing he published, at various periods from 1833 down to 1870, about thirty-five volumes, including five historical reprints, which were issued under the title of "Gowans's Bibliotheca Americana."

Mr. Gowans married, when in middle life, a Miss Bradley of New York with whom he lived happily for ten years. She died leaving no children. His own death came suddenly. He was stricken with apoplexy while walking in the streets on Thanksgiving eve, 1870, and died at his home, No. 13 Second Street, on the following Sunday. He was buried beside his wife in Woodlawn Cemetery, where at the time of her death he had purchased a plot.

The auction sale of the mass of printed matter which had accumulated at 115 Nassau Street began January 30, 1871. The catalogue was in sixteen parts, containing 2,476 pages. The sale netted about thirty-three thousand dollars. The pecuniary result to his heirs, a brother and his children living in Kentucky, would have been still more gratifying if more books and pamphlets had been added to the eight tons which were sold for paper stock. Many of the lots brought less than the cost of cataloguing them. The expenses connected with the sale are said to have amounted to over $15,000, or to thirty per cent, of the total sum paid by the book-buying public for this huge accumulation of paper and printer's ink.