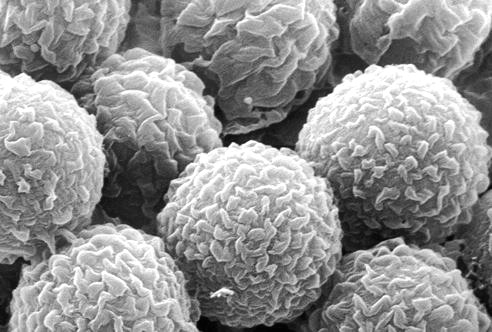 Moldspores are far more attractive under a microscope than on a book.

This has been a tough summer for the rare books and prints departments of the Boston Public Library. It seems that pretty much everything that can go wrong did go wrong. The issues they have experienced provide a microcosm of the problems libraries face today, though few experience so many of them all at once.

Last April, the library's President, Amy Ryan, was informed that two prints, one valued at $600,000, had been missing for almost a year. After a couple weeks of frantic searching, she concluded they must have been stolen and the police and FBI were called in. Boston's Mayor was not pleased, and after a meeting between the library's Board of Directors, President, and the Mayor's representative, Ms. Ryan handed in her resignation (click here). Astonishingly, the next day, the missing prints were found, misplaced among the 1.3 million items in the prints section of the library. Still, there was too much water over the dam. Ms. Ryan did not withdraw her resignation, but left a month later anyway.

Then, a few weeks later, a study commissioned by the library to evaluate its situation was released. It revealed that the library was plagued with problems (click here). It found the prints area was terribly disorganized, with records incomplete and hard to follow. Locating material depended on the memories of veteran staff. Quarters were cramped, almost no space was available for storing items or doing any work, helping to explain why things could readily get lost. The report's criticism was hardly limited to current staff. It found that previous administrations had proven better at obtaining collections than caring for them, and that the city provided insufficient funds and personnel to manage such a collection.

Now, one more major problem has befallen the library, in its Rare Books Department. It is the fear and scourge of librarians everywhere – mold. On September 14, a staff member retrieving a copy of the British Museum Catalogue of Printed Books discovered mold on it. This led to immediate surveying of the collection and the discovery of additional volumes showing signs of mold. Library officials quickly called in an outside firm specializing in mold containment to evaluate the situation. They also brought in several dehumidifiers to assist the central air conditioning which is the main source of climate control. A second group of dehumidifiers was placed on order.

There are 1,000,000 manuscripts and 500,000 books in the library's Rare Books Department. Fortunately, most of the manuscripts are housed in archival boxes which protect them from mold. Cleaning efforts will be focused on the books which are kept on open shelves. A vacuuming process is used to clean spores off of the books. An extensive effort will be employed as the library announced that it will be closing the Rare Books Department from public use for an estimated 5 to 10 weeks. The library has not said how much the clean-up will cost, but an undertaking of this magnitude will not be inexpensive.

Historic collections are not easy to maintain. Libraries have taken on much of the task of preserving our history. It is not their main purpose in being, but it is essential that someone do it if we are to maintain a connection to our past, if we are to know who we are and learn the lessons our ancestors taught us. However, preserving these collections is extremely expensive. The Boston Public Library's misadventures this summer have demonstrated this stark reality to the bright light of day. For decades, funding for libraries has been getting tighter, even as collections expanded. Now, access to information digitally has reduced usage of most rare book rooms, making public willingness to fund their operation even tighter. We have a dilemma here, one still seeking an answer.