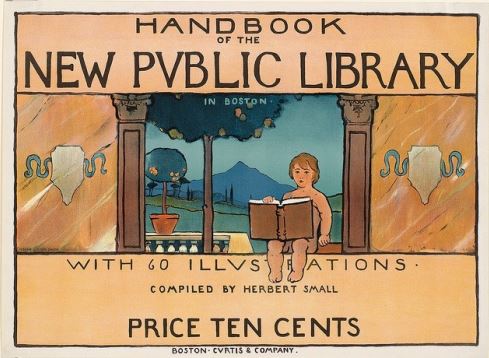 The Boston Public Library has released the results of a year-long review of its Print Department. It was something of a one-two punch, coming on the heels of June's strange and embarrassing case of a missing $600,000 print, once thought to be stolen but later found to be misfiled (see Row 14B, Bay 3, Shelf 2). The timing of the report's release is coincidental. The independent report was ordered a year ago, it being more anticipatory, rather than reactive, to the troubles which led to the library president's resignation and heavy criticism from the city's mayor.

At some point last year, an Albrecht Dürer print, Adam and Eve, valued at $600,000, went missing from the BPL's Print Department. So did a Rembrandt sketch valued at $30,000. For reasons not clear, it took almost a year for this to be reported to BPL President Amy Ryan. She immediately suspended one employee and ordered a search, but as days and weeks dragged on without it being located, the suspicions grew that this was a case of theft. Security mechanisms were such that it appeared it had to be an inside job. When the news reached the Mayor's office, officials, including Mayor Martin Walsh, were quite displeased. Criticism was leveled at the library both for losing valuable material and not treating it as being the kind of event that needed to be reported to its President. After a meeting of officials from the Mayor's office, the Board of Directors of the Library, and the library's president, the President resigned.

Then, just a day later, a searcher found the missing items. They had been misfiled, roughly 80 feet from where they belonged. It was a happy ending in terms of finding the valuable items, but still left exposed the question of how this could happen in the first place. The outside report, prepared by Simmons College Professor Dr. Martha Mahard, explained how this could happen. Indeed, after reading the report, one wonders how it hasn't happened much more often. Perhaps other items are missing. The records are such that this could happen without anyone knowing. Ms. Mahard's report is highly critical, though she saves some of her comments for the Mayor and the city as well as the library and its past management. The BPL print collection certainly can be described as a mess, but one wonders whether the problems at Boston Public are mirrored at many other libraries, possessors of large collections, but lacking adequate staff, training, and facilities to properly manage all of the material they own.

What Ms. Mahard found was a disorganized collection in cramped quarters, stacks overflowing, almost no working space, with insufficient staff or training. The problem was long in the making, and she said that past leadership was more suitable to making the connections that acquired material, through donations and purchases, then in maintaining it. A look through her report reveals the following among its problems.

There is no central record of acquisitions. Acquisitions had to be located through correspondence files, purchase orders, and the like, leaving likely gaps in listing what items have been purchased or donated over the years.

Documentation of what is owned is similarly flawed, leaving it hard to know what exactly the library has.

Descriptions of listed material are often inadequate or missing, making it difficult for researchers to understand what the library has even when items are listed.

The physical filing of material is incomprehensible. Ms. Mahard noted that this is more difficult for loose paper items then for books, which can follow standard Dewey Decimal-type organization. Still, there needs to be some system, and while there probably was one at one time, it is now essentially impossible to figure out what it was. "The overall arrangement of the print stack defies logic." Locating material to a large extent now relies on the memory of veteran staff.

There is insufficient space to store the material – "The inescapable conclusion of this work is the fact that the collection is completely out of space." Items often are left on book carts and the like because there is no place to put them.

Work space is limited, with but one small table on which to place items to look them over.

Thirty percent of the material is in stacks without climate control, a disaster in the making for old and delicate material.

In a bow to realism, Ms. Mahard notes, "It may be futile to assert that the collection is under-staffed and badly housed in inadequate space. This plaintive tune has been repeated since 1944..." However, this does not prevent Ms. Mahard from asserting these factors as part of the problem. "The Mayor says that the library must do better. Well and good, the staff are willing and eager to do better but cannot do more than they do now without additional resources. Where are these to come from? How can they do better within the city-imposed limitations on full-time staff?"

Still, this does not leave those responsible for the collections off the hook. While more help is assuredly needed, the library must provide better access to its collections to researchers. Scattered records, limited digital resources, or an out-of-date card catalogue that has had no new entries since 1998 are not sufficient to locate material. Nor is relying on three veteran staff members to be able to find relevant material within the miles of shelves satisfactory. The library needs to implement what Ms. Mahard describes as "intellectual control." She explains, "To achieve intellectual control there must be a combination of documentation of the object starting with acquisition, descriptive cataloguing and multiple access points, as well as control of the physical environment, orderly physical arrangement, and current location data. Maintaining intellectual control over collections is considered an essential curatorial function." And, perhaps in anticipation of the events regarding the missing print a few weeks ago, she adds, "It is also an essential pre-requisite to effective security and preservation management."

She provides detail into how to go about achieving these aims. Naturally, it will require much work, in describing and documenting as well as digitally cataloguing material and bringing order to the storage facilities. Investments will be needed in facilities and personnel. Current staff cannot be expected to make up for years of neglect and inadequate support by themselves, so investments will have to be made by the city if all that is needed is to be carried out. This is hardly a need Boston alone faces. Libraries everywhere suffer from staff and facility shortages, often victims of cuts as louder voices drown out library needs. Ms. Mahard has outlined the problems and potential solutions for the Boston Public Library, and much of what she says undoubtedly will apply to other libraries. However, it is left for others to decide whether to make the investments needed to carry out the mission.