Row 14B, Bay 3, Shelf 2: A Most Incredible Story of a Missing $600,000 Print, the Police, FBI, a Resigning Library President, and Lost & Found at the Boston Public Library 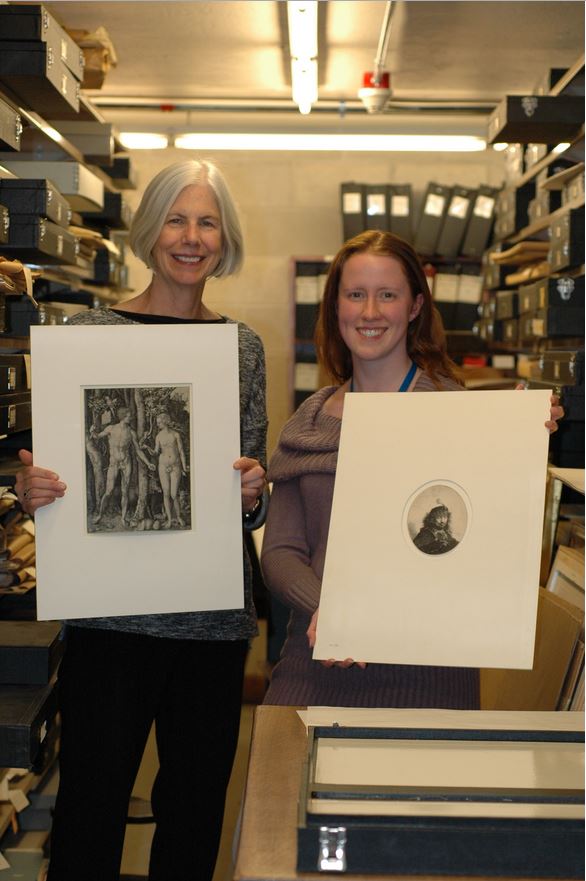 In the summer of 2014, some people at the Boston Public Library realized that a valuable print was missing. The missing item was Albrecht Dürer's Adam and Eve (some call it The Fall of Man), estimated at $600,000. The estimate for this 1504 print is no exaggeration, a copy having sold at Christie's in 2013 for $662,500. Additionally, a Rembrandt sketch valued at $30,000 was missing.

However, it was not until April of this year that the head of the library, President Amy Ryan, was informed that the valuable works were missing. The reason for the delay is unclear, but it may well have been a case of officials below Ms. Ryan being embarrassed that such a valuable item under their care had disappeared. Presumably, a lot of searching was conducted during that period of nearly a year.

One can also presume that President Ryan was not pleased. The keeper of the library's special collections, Susan Glover, was soon placed on leave after the loss became known. The Boston Police and FBI were brought in to investigate the case. A few weeks later, Ms. Ryan announced that an outside party would be brought in to thoroughly evaluate the library's security system.

The primary theory behind the items missing, naturally enough, was theft. However, officials were dubious that this was the typical case of an outsider coming into the library and sneaking off with the print tucked under a jacket. Security may not have been perfect, but it wasn't lax at Boston Public either. The works were kept in an alarmed, locked room and could only be seen by visitors with an appointment. The result was that speculation focused on it being an inside job. Only an insider, it was reasoned, would be able to enter the room under cover of authority and make off with the items without raising suspicion.

There was also one other theory. That was that the works were simply misplaced. Of course, after a year of searching, the odds were dimming that this relatively benign explanation would prove correct. Still, it should be noted that there are around 1.3 million items in the Boston Public Library's Print Department. Percentagewise, 2 is not a high number. I misplace things all the time, though I have far fewer than 1.3 million possessions. Then again, I never misplace something worth $600,000. That is likely also true of the police and FBI officers who investigated the case. And, it appears to also be true of Boston's mayor, who was quite displeased with the goings on at Boston Public.

Despite the involvement of the police and FBI, plus the pledge to bring in outside security experts, Mayor Martin Walsh was not placated. After-the-fact investigation was insufficient in his eyes as a response to something he believed never should have happened. That included not just that valuable items were missing, but that the library's president was not informed of this for almost a year. His fear, naturally enough, was theft, and there was more than the loss of a $600,000 print that concerned the Mayor, as bad as that was. It led to the question of was there more missing items, perhaps theft on a much grander scale unrecognized by those in whose care they were placed.

Indeed, it later was recognized that some gold coins were missing. However, it appears these may have been missing for decades, long before Ms. Ryan assumed the role of library president.

In fairness to the officers and workers at the Boston Public Library, we should note that library theft is hardly an isolated incident. It may well be a plague. Considering the size of Boston Public's collection, the sophistication of some thieves, and what has happened at other notable libraries (the British and Swedish national libraries come to mind, along with some very prestigious universities), this is somewhat understandable. Besides which, public libraries aren't granted unlimited resources these days.

Nevertheless, the mayor's office called for a meeting with the library's Board of Trustees. That was held on June 3, and despite the mayor's representative, his Chief of Staff, Dan Koh, requesting President Amy Ryan not be present, Board Chairman Jeffrey Rudman insisted she participate. Koh made it clear he would not hold back criticism for fear of hurting anyone's feelings. Koh stated that he and the Mayor were concerned more items may be missing, that the issues were not being taken with sufficient concern by library officials, and the Board was not acting sufficiently independently of the library's President. Rudman, who strongly supported the work of President Ryan, said that he respectfully disagreed.

Despite Board support, Ms. Ryan evidently felt her position had become untenable considering the dissatisfaction expressed by the city's highest officials. Later that day, she resigned, effective July 3. While expressing her gratitude to the Board of Trustees for their support, Ms. Ryan stated, “I am choosing to step aside at this time to allow the work of the Boston Public Library to continue without distraction.”

What happened next was even more surprising. The following day, Ms. Ryan announced that the two items, missing for almost a year, had been found. They were, so to speak, hiding in plain sight. Perhaps not plain sight, as they were obscured by other works on the shelf, but they were discovered just 80 feet away from the place they should have been. There they were, hidden among the other material in Row 14B, Bay 3, Shelf 2. Conservation Officer Lauren Schott discovered them while conducting another search. Miss Schott was quoted as saying, “I was shocked to find the two prints, but it really was just luck of the draw. Anyone of the team that’s been looking for the Dürer and Rembrandt could have found them.”

President Ryan released a statement in which she said, “We’re thrilled to have found these treasures right here at home. They were found safe and sound, simply misfiled. BPL is still committed to enhanced security and a full inventory, but today is a day of celebration for the entire team at BPL. The staff couldn’t be happier after hundreds of hours of searching. I want to thank the FBI, Boston Police Department, and US Attorney’s Office for their work throughout this period.”

All's well that ends well. Maybe. The sudden turn of events left a few people scratching their heads. However, those at the library are confident the missing prints were there all along, not returned to the wrong shelf more recently. Meanwhile, Ms. Ryan's resignation still stands. A library president has seemingly resigned because a couple of prints were put back on the wrong shelf. Other than this small case of misfiling, Ms. Ryan has a sterling reputation in the field. There are undoubtedly some valuable lessons to be learned from this very strange case at the Boston Public Library, but whatever they are escapes me.