Louis Mandrin vs. The Fermiers Généraux - A Political Testament 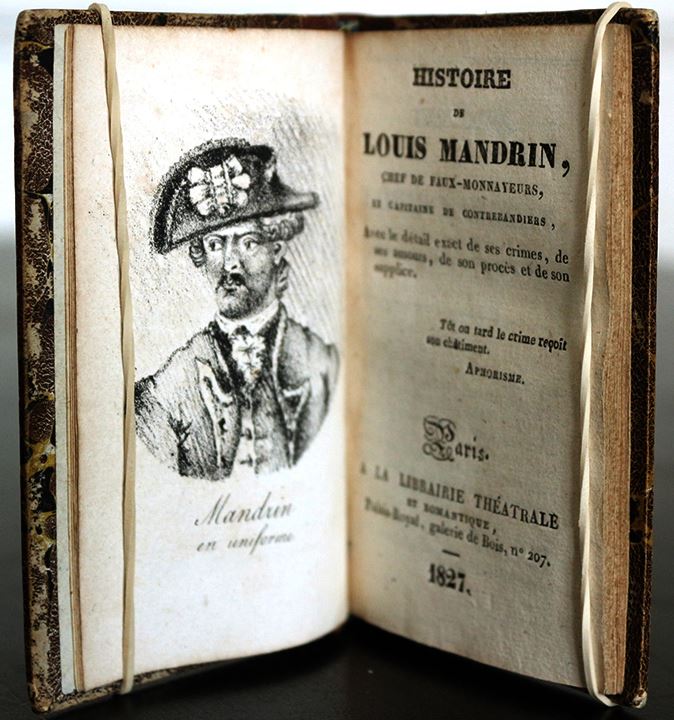 As I was reading the Life of Mandrin the other day, I started to wonder why this villain (1725-1755) had become so popular a myth in France. Tracking down the hypothetical truth, I was led from one old book to another, until I reached Corinne Townley, author of La Véritable Histoire de Mandrin (The True Story of Mandrin, 2005) on the phone. “Mandrin was a very mean and violent man,” she confirmed. “But he was portrayed as a French Robin Hood because he was used as a political tool against the famous Fermiers Généraux, who collected taxes during the Ancien Régime.” Now, that put me on the right track.

Sign of his popularity, Louis Mandrin made it to the peddling books of the early 19th century. Usually short, they dealt with popular and light topics, as they aimed at a wide audience. They were poor quality books printed in huge quantities. Nevertheless, those dedicated to Mandrin, for instance, have become quite rare. The other day, I had to fight harder than expected to win a copy of La Vie de Mandrin printed in 1827 in Paris. It’s actually a reprint of Histoire de Louis Mandrin, attributed to Abbé Regley (Holland, 1756 for the second edition—I couldn’t spot the first one). Both editions feature a portrait of the villain as a frontispiece; but the one of 1827 is different, it looks like a charcoal drawing with Mandrin wearing a uniform and the famous hat he stole from one of his many victims. He looks handsome and serious—the book gives his physical description: “Said to be tall, with black and curly hair, Mandrin had an aquiline nose and regular features, a broad chest, and a well-shaped thigh; he was unusually strong.” To reduce the cost, the publisher turned an in-12° volume of 140 pages into an in-18° of 79 pages—a tour de force. This copy has a contemporary half-morocco binding, which is quite unusual as these books were usually sold and stored in their original wrappers—another way to cut down the price. It contains several incorrect “facts,” of course, and was probably hastily put together while the iron was hot—right after Mandrin’s execution in 1755. The idea was to attract the readers with dark and thrilling stories, but the printer made sure he didn’t hurt neither the King nor morality: “The lives of villains who have declared war to the society at large,” reads the preface, “(...) show the young persons the horrible consequences of a life of crime and vice.” Obviously, this book wasn’t the starting point of Mandrin’s good reputation.

The book portrays Mandrin as a bloodthirsty psychopath. A young an innocent woman, who was looking for her lost dog, unwittingly stepped into Mandrin’s cave one day—his legendary hideout in the mountains. He tied her to a pole and undressed her totally. “He insulted and mistreated her numerous times,” reads the book. He then forced one of his reluctant men to stab her to death: “He put the knife into his hand, saying: “You’re not experienced yet, I want to instruct you. (...) See this other knife? I’ll stab you if you do not obey. (...) Stab her at the tip of her breast.” But the poor boy was too moved by his victim, so Mandrin grabbed his hand and plunged the knife into the girl’s chest. Blood spurred and the wretched victim uttered a high-pitched cry. What a dramatic scene! I found it a little bit too much, to be honest—and yet. “Mandrin’s popularity lasted less than two years, from 1753 to 1755,” said Corinne Townley. “But he was convicted many times before, and accused of several horrible crimes, including the murder of a little girl.”

One day, Mandrin broke into the house of one Moret, employee of the Ferme Générale, whom he knew was responsible for the arrest—and, consequently, execution—of one of his brothers. “In order to soften his aggressor, Moret presented him his 18 months old son. “You arrested my brother and you beg for mercy?” retorted the villain. “Perish, you and your child! May your entire race disappear.” He repeatedly hit them with his sword, not stopping until their cut off bodies lay in a pool of blood.” Now, that was too much—right? Well, in fact, it wasn’t either. The Jugement Souverain of May 24, 1755, that officially condemned Mandrin to death, relates this story. It took place in Mandrin’s native town of Saint Geoirs where, on his way to Switzerland, he killed the said Sigismond-Jacques Moret, employee, and a child of 18 months he was holding in his arms. According to the same document, Mandrin and his men killed over 22 persons between 1753 and 1755, including a pregnant woman. The latter was killed in Saint-Rome de Tharn after a bourgeois, or a rich merchant, had escaped through her house. The official Jugement doesn’t clearly state that Mandrin killed her himself, but the peddling book does: “Mandrin stabbed her in the belly with his bayonet. (...) Thus an infant felt the iron before even seeing the light.”

Though people tend to consider criminals like some sort of popular heroes who revenge them from an oppressive system, this book gives no reason to consider Mandrin as a lovable rascal. “People don’t know the real story of Mandrin,” underlined Corinne Townley. “They only know about the popular myth who opposed the Ferme Générale.”