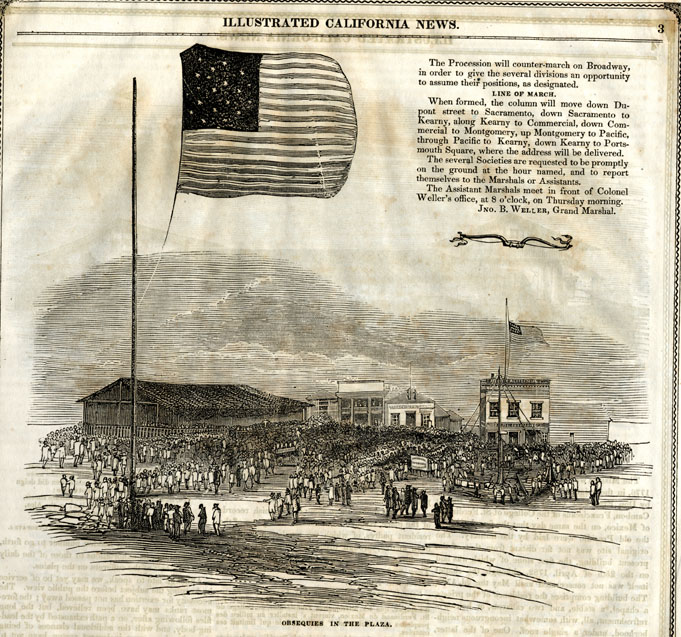 Funeral obsequies of General Taylor.
Our illustration represents the scene in the Plaza of San Francisco, during the delivery of the Funeral Oration by the Hon. ELCAN HYDENFELT, from a platform erected immediately in front of the old adobe building. It has been only by dint of great exertion that we have been enabled to present to our readers the representation of a solemnity occurring so closely upon our own day of publication; had it not been, indeed, for the courtesy and consideration of Mr. Henry Bradley, who placed at our disposal a Daguerrean view of the subject, taken by himself, the engraving could not have been completed in the time required; and we should have missed the opportunity of forwarding to the States the Californian testimonial of respect towards him, by whose daring and military skill this territory was acquired to the Union.

The following is the programme of the procession, as arranged the previous day by the City authorities.
Agreeably to the request of the Committee of Arrangements, the Grand Marshal has issued the following order:
The Procession will assemble on Broadway, between Dupont and Stockton streets, at 9 o'clock, A. M., the right of the column on Dupont street.
CHIEF MARSHAL.
Committee of Arrangements.
BAND.
Marshal. California Lodge, No. 1—Masons. Marshal.
David Crockett Lodge—Masons. Independent Order of Odd Fellows.
BAND OF MUSIC.
First California Guard.
HEARSE.

White Horse—caparisoned.
The Reverend Clergy.
Relatives of the Deceased.
Officers of the Army.
Officers of the Navy.
Ex-Officers and Soldiers Mexican War.
U. S. Government Officers.
Marshal (Consuls and Representatives ) Marshal ( of Foreign Gov’ ts )
Heads of Departments.
Members of Senate and Assembly, State California.
BAND OF MUSIC.
Will form on Broadway, in the order named.
Marshal.     FIRE DEPARTMENT.    Marshal.
Engine Companies.
Hook and Ladder Companies.
Will form on Dupont, right on Broadway.
Mayor and Recorder.
City Council.
Chief of Police.
Members of Police.
County Officers.
Judges of the Courts.
Members of the Bar.
Medical Faculty.
Captains and Shipmasters in Port.
Mariners.
Marshal.     BAND.     Marshal.

The Procession will counter-march on Broadway, in order to give the several divisions an opportunity to assume their positions, as designated.

LINE OF MARCH.
When formed, the column will move down Dupont street to Sacramento, down Sacramento to Kearny, along Kearny to Commercial, down Commercial to Montgomery, up Montgomery to Pacific, through Pacific to Kearny, down Kearny to Portsmouth Square, where the address will be delivered.

The several Societies are requested to be promptly on the ground at the hour named, and to report themselves to the Marshals or Assistants.

The Assistant Marshals meet in front of Colonel Welter's office, at 8 o'clock, on Thursday morning.
JNO. B. WELLER, Grand Marshal.

Procession formed upon Broadway, between Stockton and Dupont streets, and commenced moving at 11 o'clock.

After the Chief Marshal, Col. J. B. Weller, came the Committee of Arrangements, followed by a band of music. Next were the Masons—California Lodge, No. 1, David Crockett Lodge, and the Royal Arch Chapter. The Masons were followed by the Odd Fellows, accompanied by a band performing a mournful dirge as they marched along.

The first California Guard followed in the procession. They also were accompanied by a band of music.

Next followed the hearse, drawn by four milk white horses. The horses were appropriately caparisoned, and were led by colored footmen in livery. A white horse, also caparisoned, followed immediately after the hearse. Upon the hearse were painted the last words of the President, " I have done my duty—I am ready to die."

Then came the clergy, relatives of the deceased, officers of the army and navy, officers and soldiers who had served in the Mexican war, United States government officers, foreign Consuls, heads of departments and members of the Legislature. The revenue service was strongly represented. The sailors belonging to the cutter bore with them the United States flag, dressed with black. We also noticed Col. Collier, and most of the officers of the Custom House.

The Mayor, the Recorder, the two Boards of Aldermen, the City Marshal and the Police, appeared next in the procession.

The Judges of Courts, Lawyers, Doctors, ship Captains and Sailors, followed in the succession we have mentioned, and then came the old Californians in goodly number. Next followed the representatives of the various States. The New Yorkers had a banner of blue satin, and the following inscription in gold letters—"Sons of New York, We mourn the loss of our President."

The early pioneers, men who have resided in California more than three years, were regarded with considerable curiosity. The old Californians form a sort of distinct class, for their associations with this soil commenced at a time when few of our present population had dreamed of making California their residence.

The China Boys brought up the rear of the procession. They were dressed in their richest attire, and attracted the attention of all who had gathered to witness the display.

A platform had been erected immediately in front of the old adobe building, on Portsmouth Square, and here were performed the subsequent ceremonies. Seats had been reserved for ladies near the orator, and we may safely say that the fair sex never collected in larger numbers in San Francisco than upon this occasion. The proceedings in the plaza were, first, a prayer by Rev. Mr. Fitch.

The band stationed upon the platform performed a dirge, and then the Hon. Elkan Hydenfeldt, the orator of the day, was introduced. Mr. Hydenfeldt's eulogy was very brief, occupying only ten minutes. The life of the distinguished deceased he deemed to be his best eulogy.

Rev. Albert Williams pronounced a benediction, and then the assembly moved slowly and quietly away.

Full accounts having been given in the city papers of this day's solemnities, we content ourselves with condensing the substance of the Alta California report.


Mission of Dolores.
The Mission was established on the 1st of August, 1776, in the reign of Charles the Third of Spain, by Don Francisco Talon, and Don Pedro Benito Cambon, Franciscans of the College of St. Ferdinand of Mexico, on the same day that the foundations of the old Presidio were laid by the military. The original site was not far distant from that of the present building, the first stone of which was laid on the 25th of April, 1782, although the chapel itself was not consecrated until May the 2d, 1792. The building comprises the residence of the priests, a chapel, a stable, and two cabarets, or houses of refreshment, all, with somewhat incongruous neighborhood, under a single roof. One of the latter, called the Mansion House, is kept in very good style by R. T. Ridler, the oldest settler in the place, who holds a ten years lease, under the church.