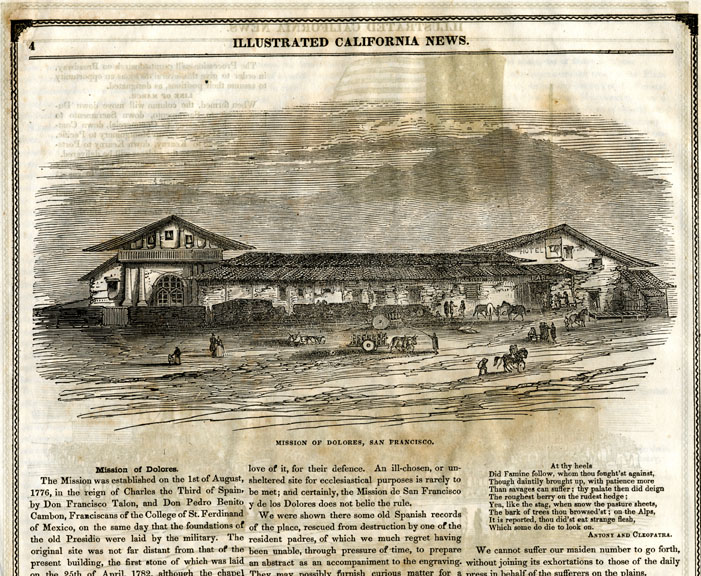 Mission Delores as it appeared in 1850.


The Mission itself is delightfully situated, sheltered at the back by a semicircle of hills, with a fine slope of rich land in front, extending down to the waters edge. It may be observed indeed, as an almost invariable rule, that the sites of Abbeys and Monasteries, except in a few Asiatic districts where asceticism prevailed, were chosen on a very different principle to that which guided the laity in their own selection. In the olden time, the bold baron, or knight who could muster a few jackmen in his train, would perch himself, like an eagle in his eyrie, on the top of the most inaccessible hill he could find; from which—having but indistinct notions of meum and tuum, the distinction between mine and thine— he would swoop down upon the unwary traveler, and then make good his retreat, secure from the reprisals of the neighboring townships, to his impregnable fastness. To view his choice in the most favorable light, he had an eye for the picturesque; while the monks, of more utilitarian temperament, would occupy the richer lands beneath, trusting to the dread of holy mother church, or possibly to the love of it, for their defence. An ill-chosen, or unsheltered site for ecclesiastical purposes is rarely to be met; arid certainly, the Mission de San Francisco y de los Dolores does not belie the rule.

We were shown there some old Spanish records of the place, rescued from destruction by one of the resident padres, of which we much regret having been unable, through pressure of time, to prepare an abstract as an accompaniment to the engraving. They may possibly furnish curious matter for a subsequent Number.


At thy heels
Did Famine follow, whom thou fought'st against,
Though daintily brought up, with patience more
Than savages can suffer; thy palate then did deign
The roughest berry on the rudest hedge;
Yea, like the stag, when snow the pasture sheets,
The bark of trees thou browsed'st; on the Alps,
It is reported, thou did'st eat strange flesh,
Which some do die to look on.
ANTONY AND CHOPATRA.

We cannot suffer our maiden number to go forth, without joining its exhortations to those of the daily press in behalf of the sufferers on the plains.

Although late to speak, we may yet be of service by keeping the subject before the public view. The necessity for exertion has not passed away; the foremost ranks may have been relieved, but the long files following after, on a path exhausted by the leading body, and with the additional chances of being overtaken by a more inclement season, have yet to be provided for.

Absolute starvation within a few degrees of us!— Sixty thousand souls on their weary way ; forty miles of desert to be crossed, strewed with disheartening tokens of disaster; some reduced to disputing the carrion carcases with the vulture and the crow; some, so it is said, driven to suicide in desperation; bodies lacking the rites of Christian burial, the survivors pushing on with all speed to save themselves;—the picture is too fearful to dwell upon.

Were it even on behalf of a strange people, aliens in blood and in language, the appeal could hardly be made in vain; but where the lives of thousands of fellow citizens are at stake—where no one can make sure, in the present feverish and impulsive rush from the Atlantic to the Pacific, that some friend or relative is not sharing the common peril, ekeing [sp] out his scanty stock in hope of bringing himself within the chances of relief—let it not be said that exertion should have flagged for a moment, until the safety of the very last remaining traveler in the summer migration be secured. Much has been done, but yet not enough; the effort must be carried out, lest the memory of the great relief movement be marred through incompleteness of execution; and as a set off to the late unhappy divisions in the Commonwealth, let it be said that on one subject at least, a work of charity and brotherhood, the unanimity both of feeling and of action was complete.

Those opposed eyes,
Which,—like the meteors of a troubled heaven,
All of one nature, of one substance bred,—
Did lately meet in the intestine shock
And furious close of civil butchery,
Shall now, in mutual, well beseeming ranks,
March all one way; and be no more opposed
Against acquaintance, kindred, and allies.
1 HENRY IV., Act 1, Sc. 1.

So may it be in Sacramento city once again, and that without unnecessary delay. There is every hope, indeed, that it will be so, the excitement caused by the late affray having so completely passed by. Even upon the very scene of action, were it not for the anxiety felt for the recovery of Mayor Bigelow, regret for the unhappy fate of Sheriff McKinney (www.sacsheriff.com/memorial/mckinney.cfm), and the absence of the vanquished party from their usual haunts, there would be little to remind us of the event having ever taken place. The squatters, or settlers—to use a less invidious term, have not yet ventured to leave their refuge, or to put themselves into the power of the citizens; but the general inclination seems to be towards suffering angry feeling to subside, drawing a veil over the past, and inviting Harmony to follow at the heels of Peace. The Law must of course be vindicated, but it should be borne in mind that law may be harshly or leniently enforced, according to the spirit in which it is appealed to Summum jus, summa injuria.

We have been at some pains to gather a correct account of the whole affair, having visited Sacramento city for that especial purpose, where we received the most courteous attention from the principal actors in the scene, who gave us every facility for acquiring the desired information, each of them having obliged us with a recital of what took place within his own particular sphere of observation. It is necessary, however, to observe, that it was with citizens alone, or "law and order people," as they phrase themselves, that we have been able to communicate, and are consequently able to give a one sided story only. One sided it may be fairly called; for although the accounts furnished by the one party be strictly accurate, even to the minutest details, much must remain to be told on the other side, at which it was of course impossible to arrive. As in the well known fable, this time the lion is not the painter.

It is unnecessary to dwell upon the cause of these civil broils, any further than to square in the relation of them, and to render it intelligible at a distance.— "Jas. McClatchy and Michael Moran"—we borrow the preliminary proceedings from a local journal— "were arrested the day previous and brought before Justice Fake, charged with being parties in contemplated attempt to resist the Sheriff should he enforce the law in accordance with a decision given by Judge Willis against the Squatters. The strength of the testimony was against the prisoners, and in default of bail of $2,000 each, they were both conveyed to the prison ship.

Yesterday morning, a house in Second street having been seized by the Sheriff in accordance with the law, the Squatters assembled in armed force of about thirty, under a leader by the name of Maloney.— They proceeded to the house which was in possession of the authorities and retook it. Their leader then harangued them, and they proceeded down L street to the Levee. The party were armed with guns and pistols; their leader was upon horseback, armed with pistols and a sword. They marched along the Levee toward the prison ship, a crowd of citizens gradually collecting behind them. The report then spread, that their intention was to release the prisoners there confined.

The Mayor, who was upon horseback, issued his orders at Warbass's corner, calling upon the citizens to take up their arms for the defence of the laws of the city and of California. He then made the same proclamation on the opposite corner, and subsequently farther up on J street, opposite the Southern Hotel. Numbers at each place rushed for their arms and began to assemble at the prison ship.

It seems, however, that the Squatters, when they reached the outlet of Sutter's Lake, just above I street, stopped and commenced removing lumber from a certain lot of land there. Soon, however, Maloney, their captain, addressed them briefly, stating that the lumber belonged to a friend, and that he would have it removed soon. This was satisfactory to them, and they marched in regular order, headed by their captain, with drawn sword, up I street. They were followed by a crowd of unarmed citizens, who were hooting and laughing at them.— When the crowd of citizens reached the corner of Second and I, one of their number stated that the Mayor was approaching, and that they had better await his orders. The crowd stopped, and the Squatters marched on, turned round into Third street and entered J. As the Mayor rode up to the citizens on the corner of I and Second, he was asked what his orders were. He promptly replied that he wished those men who were in arms against the authorities to be arrested. Three cheers were then given for the Mayor. Mr. Bigelow said that he would lead the party himself, and they immediately proceeded after the Squatters. The Squatters, meanwhile, had turned into J street, and were marching out."