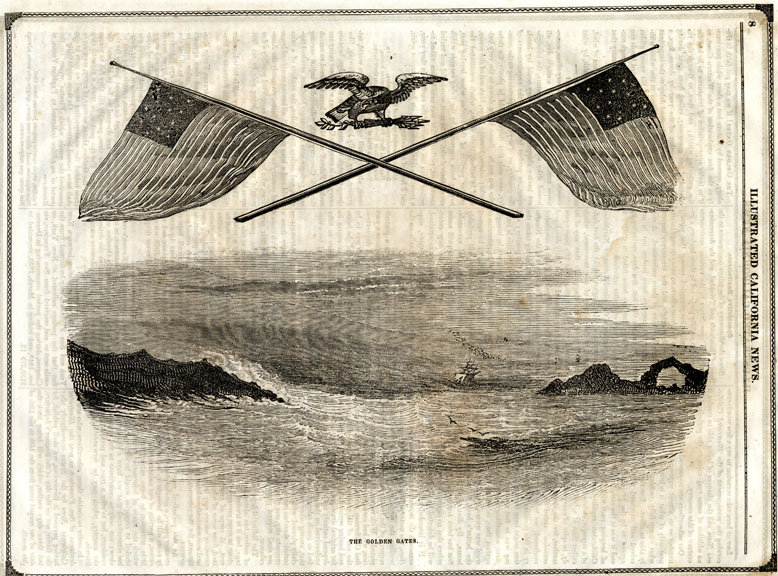 The Golden Gates, in 1850 entrance to the goldfields


Our subscribers are requested to consider this first number as an almost unpremeditated effort, in earnest only of what it is intended to become, and of what we are fully confident that we shall be presently able to effect. For the plan of it was both conceived and executed within a few days. It was agreed to by the projectors on the 22d of August, and it was at the same time determined, that, by way of keeping pace with the times, and exemplifying Californian rapidity of action, which, to the eye of a stranger, conveys the impression of legerdemain rather than of actual performance, it should be ready, in spite of every obstacle, by this 1st day of September, for the steamer to Panama. That no real occasion existed for such rail-way speed, must be confessed; not being hurried by the terrors of rivalry in this peculiar field, another fortnight's preparation might have been easily allowed; the undertaking was in fact a mere trial of strength, un tour de force, something resembling that well known match against time, in which the sheep was sheared, the wool was woven, the cloth made up, and the coat on the better's back, all within a limited number of hours. By dint of adding night work to day, the feat has been accomplished; while we flatter ourselves that no signs of haste, on the part of the artist, will be detected by the most practised eye.

It is intended to give priority of illustration to scenes in the more immediate vicinity of San Francisco, the metropolitan town de facto; gradually extending the range, in concentric circles, until the scenery of the remotest diggings shall have been depicted. With regard to those out-posts of colonization, we had anticipated some difficulty, expecting to find Californian adventurers more conversant with the use of the pick and rocker than of the pencil, and having somewhat hastily taken for granted that, for original drawings, our engraver would have to depend entirely upon himself. We were, however, undeceived on that point, and agreeably surprised to find so much talent at our disposal. Let us mention that, among other works of art, we have been especially pleased with some very spirited and characteristic sketches in the studio of Mr. MARTIN, at Sacramento city, one of which, "A Miner prospecting," we shall request permission to re-produce in these columns.

The Editorial department, owing to the shortness of notice, has labored, as yet, under some disadvantage, but it is trusted that the coming number will atone in some measure for the deficiencies of the present. A corps of correspondents has been organized, from some of whom information of the most interesting nature may be expected; but as the promised communications have yet to be received, we are thrown, for the moment, entirely upon our own resources.

As this periodical must take class among the steamer papers, a concise abstract of the semi-monthly news will be brought up to the date of its publication, a portion of our columns which will offer but little attraction to home subscribers, but without which the circle of information which they are intended to comprise would be incomplete. It must be remembered that we have a double object in view; not only to contribute to the amusement of residents, but to offer a true and perfect picture of the country, which may be forwarded to absent friends.

In order to enable those subscribers who are not denizens of San Francisco, to post the Illustrated California News for the States immediately after having perused it themselves, we shall publish, for the future, not on the day of the steamer's departure, but three days earlier, which will bring back the date of our second issue from the 15th to the 12th of this month.


Speculative Excitements.
Since the discovery of the mines contiguous to the Bays of Humboldt and Trinidad, and the determination of land speculators to the various settlements that were so rapidly projected in those harbors, a general tranquility has prevailed among that usually restless class to whose efforts so many strange infatuations owe their origin, and the temporary importance which they have at times maintained. A new fever, however, seems to have broken out in our community within the last few days, springing up so spontaneously that we have failed in tracing it to the usual source of similar infections.

The departure of the splendid steamer Northener on the evening of 31st August, marks the first definite epoch in the history of this movement, which promises to be of more magnitude than any of its predecessors. It appears that about fifty passengers by this vessel were attracted by the lately developed importance of the port of Realejo, which is concluded to be the terminus on the Pacific side of the Nicaragua route, one party of four or five having taken the sum of $100,000 for operations in that quarter; and our information leads us to believe that this is but a small proportion of the capital which will be brought to operate upon the new locality. The attention of the public on the Atlantic side seems to be turned in this direction, and the two interests will probably be together in the field. The rapid accumulation of steamers upon the Pacific coast will cause the most speedy developement [sp] of the new enterprise when its merits are thoroughly ascertained. The Republic leaves on the first September, stopping at the same port, and the Equador sails on the 8th inst., making a landing there also.

It had been our intention to have given a portrait of Mayor Bigelow, who played so prominent a part in the Sacramento city disturbances. A daguerreotype likeness had been promised, which was to be taken as soon as his health would allow of the interruption. We have therefore doubly to regret its non-arrival, being obliged in consequence to infer that his state is more precarious than had been supposed when the application was made.

PROSPECTS OF THE ADMISSION OF CALIFORNIA.— A gentleman in this city received a letter from a friend in Washington by the last mail, which casts a gloom to the hopes of California. The writer says, that the Compromise bill will not be passed, nor will California be admitted very soon at this session of Congress. He thinks the bill for a mint in San Francisco may pass the House, and that will be the only legislation for California before another year. The author of the letter containing the above opinions, had the best opportunity of judging correctly; and could we use his name, his predictions would certainly be received with much consideration. We are not yet ready to give up all hope of being admitted this session. The news by every steamer looks more and more inauspicious, and the time for hope is already almost past. Still we will trust to the justice of our country, and never despair till we are cast off beyond a doubt.

RESIGNATION.—Attorney General Kewen's resignation has been accepted by the Governor, to take place on the election of a successor in October next. He will therefore continue to exercise the duties of his office, during the trial of the prisoners arrested for participating in the late riots. Some idea of the communication between New York and San Francisco, may be formed from the fact that the postage collected at New York, on mails sent to and received from San Francisco, via Chagres, during the period commencing in December, 1848, and ending in March, 1850, amounted to $139,379 12.

THE GOLDEN GATES! if we may put faith in Geology, opened by Nature but a short while previously to the first exploration of the Western Coast, as if to invite appropriation of treasures to be had for the gathering within; and then, as though she repented of her generosity, veiled from sight during the greater portion of the year by dense fogs, a source of much vexation and delay to the impatient Mariner. But the curtain seems to rise when within a short distance of the coast; his vessel glides forth from the mist, and the long expected heads are presented to the view, bleak and dreary enough outside, giving little promise of the fertile country that lies behind.

It is a grand scene after a favorable slant of wind. Wealth pouring in towards greater wealth, by what may be called attraction of reciprocity :—


Quis pauper scribitur haeres?
vessels laden with the produce of every clime, sometimes numbering fifty or more in a single day, all. bound alike upon a gambling venture, the consigners having shipped whatever they could lay hands upon, in perfect ignorance of the requirements of the country, or of any thing appertaining to the country, save only that there is gold in plenty, for those who can get it. Some laden down to the very bulwarks; others, looming large, high out of the water, as if in ballast, their stores, which constituted the greater portion of the burden when leaving port, having been consumed by the living cargoes which crowd their decks. The most wonderful and varied assortment, perhaps, that was ever before raked together from the corners of the earth. In they pour, a resistless tide; some led on by an unquiet spirit, and a love of adventure,

All the unsettled spirits of the land,
Rash, inconsiderate, fiery, voluntaries,
Have sold their fortunes at their native homes,
Bearing their birth-rights proudly on their backs,
To make a trial of new fortunes here;

some, already well enough to do in the world, migrating, they hardly know why, but following, like sheep through the same, gap in the hedge, because every one is away for California; while over many are such as Falstaff would have been ashamed to march through Coventry with, 'discarded unjust serving men, younger sons to younger brothers, revolted tapsters, and ostlers trade-fallen, the cankers of a calm world and a long peace:" all having sacrificed home and country to the lust of lucre, save only the American, who boasts of having completed possibly a five months' voyage, and of still being able to set foot upon his own domain.

The bar is crossed; a heavy toll is levied under the specious name of pilotage, the foretaste of heavier exactions to come.

The Fort, los Angelos, los Alcatrazas, Yerba Buena, successively open into view, and then appears such a forest of masts as not ten other ports in the world can shew. A glorious sight, to all but the master of the ship, whose professional eye perceives with a glance that this mighty fleet is by no means indicative of a corresponding trade, here and away again in obedience to the legitimate calls of commerce, but an accumulation of ancient date, still gathering like drift wood at the mouth of a river, floating idly on the water. Some contrive, by dint of enormous outlay, to effect an escape; but by far the greater number are doomed to lie in idleness for some indefinite time, possibly till they fall to pieces with age. For the port is, in truth, a gigantic ship trap; the Golden Gates, so easy of entry, seeming to close behind the unsuspecting vessel so soon as she shall have passed between. On them might fairly be inscribed the words which Plautus wrote for the portal of an edifice dedicated to Paphian Venus, at Rome:—