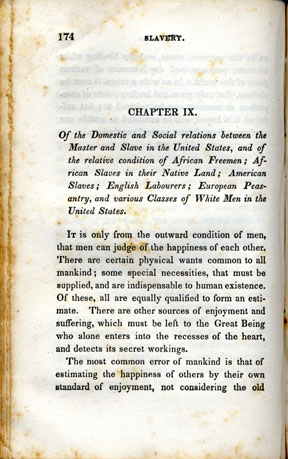 SLAVERY IN THE UNITED STATES
By J. K. Paulding
Published in New York in 1836
CHAPTER IX.
Of the Domestic and Social relations between the Master and Slave in the United States, and of the relative condition of African Freemen; African Slaves in their Native Land; American Slaves; English Labourers; European Peasantry, and various Classes of White Men in the United States.
23,895 words


IT is only from the outward condition of men that men can judge of the happiness of each other. There are certain physical wants common to all mankind; some special necessities, that must be supplied, and are indispensable to human existence. Of these, all are equally qualified to form an estimate. There are other sources of enjoyment and suffering, which must be left to the Great Being who alone enters into the recesses of the heart, and detects its secret workings.

The most common error of mankind is that of estimating the happiness of others by their own standard of enjoyment, not considering the old proverb, that "One man's meat is another man's poison," and that the endless diversities of habits, character, feeling, intellect, taste, and physical organization, create similar varieties in the sources from whence happiness is derived. One thing, however, is certain, that though mankind differ in so many points, there is one on which they all think alike. They all agree that hunger, thirst, cold, and overtasked labour, are real substantial evils; that, in proportion as we are free from these, we enjoy life, and partake of happiness; and that, on the contrary, no diversity of habit, character, education, feeling, taste, or intellect, can reconcile us to either one or the other. There is not the same degree of unanimity or certainty with regard to the enjoyments and sufferings of the mind; neither is it possible to form an estimate of the happiness of any one from his station in life, the degree of knowledge or ignorance he may rise or sink into, or the wealth or power he, may possess. We might be miserable in the situation of a man who is in fact happier than ourselves. In short, after all the flourishing harangues and declamations of sentimental philosophers and philanthropic Quixotes, all reasoning and all experience only bring us to the conclusion of Paley, that "All that can be said is, that there remains a presumption in favour of those conditions of life in which men generally appear most cheerful and contented. For though the apparent happiness of mankind be not always a true measure of their real happiness, it is the best we have."

And this standard of happiness accords best with our ideas of a wise and beneficent Providence, because all experience brings to us the conviction, that the class of human beings which is by far the most numerous, namely, the labouring class, is the merriest and most cheerful, when possessed of the ordinary comforts of life, which, as before observed, are indispensable to human existence in a civilized state. It would ill accord with the attributes of the Supreme Being, to presume, that the exceeding small portion of mankind which is free from the necessity of labour, should enjoy greater happiness than the vast majority, and that without any claim to superior virtue, or perhaps superior intellect.

Of all the varieties of the human race and of human condition that have ever fallen under our observation, the African slave of the South best realizes the idea of happiness, according to the definition of Archdeacon Paley; for he is, or rather was, a few years ago, the most light-hearted, sportive, dancing, laughing being in the world. It will be seen in the letters which will presently be produced, that a great change has lately taken place in this respect, inconsequence of the labours of the abolitionists to enlighten him to a proper sense of his miserable condition. This cheerful, contented disposition, will doubtless be ascribed by that over-zealous fraternity to ignorance. Be it so. That which destroys our happiness may be called knowledge, but can claim none of the honours of wisdom, whose sole office is to increase the happiness of mankind. In this respect, ignorance and wisdom often go hand in hand; for nothing is more certain than that, if a portion of mankind were to become as enlightened as the angels, and yet be obliged to inhabit the earth, they would be the most wretched of all beings. So with the slaves of the South. Teach them to be happy, and let this be the extent of their wisdom; for that knowledge which conduces to the happiness of freemen, is a curse to the slave.

All those who have visited the states in which slavery prevails, whatever may have been their previous impressions of the horrors of that condition, must have been struck with the uniform hilarity and cheerfulness which prevail among the blacks. Labouring generally in large numbers together, they partake of the influence which companionship always exercises over man, the most social of all beings. In the meadows and harvest-fields they lighten their labours by songs, the measures of which accord with the strokes of the cradle and scythe; and in whatever employment they may be associated, they are always joking, quizzing, or bantering each other. The children enjoy a life of perfect ease, and are maintained, by the products of the land which belong to them and theirs. The parents, being freed from all anxiety or exertion for the present or future support of their offspring, are never beset by the gnawing cares of the free white man, whose whole life is one continued effort to provide for himself and his children. The aged and infirm are also taken care of by the master, either from the dictates of his own humanity, or the obligation imposed on him by the law. None of them ever become wretched paupers, a disgrace to their race and a burden on society; and if a philanthropist were to visit their quarters during one of their holydays, he might behold a picture of careless, thoughtless hilarity, which would neutralize much of his horror of that state, which, in every age and nation of the world, has been the lot of millions of human beings, of all shades and colours.

This may indeed be the "bliss of ignorance;” but, whatever be its source, happiness is still happiness, all the world over. That knowledge which only makes us discontented with our situation, is not a possession to be coveted; nor can any acquisition which diminishes our enjoyments be an object of envy or desire to a wise man. The situation of the slave will indeed be wretched, should the abolitionists succeed in implanting in his mind the same views and feelings which freemen entertain with respect to bondage. But it should be borne in mind, that the sense of degradation, and the impatience of restraint, which result from education and habit, are beyond the comprehension of those who have never known, or ever aspired to, any other condition of life. The error of those who insist on the miseries of the slave, consists in placing themselves, with all their experience of the enjoyments of personal liberty, in his situation, and then imagining what he feels from what they would suffer in his place.

In comparing the sources of happiness within the reach of a well-treated slave with those of a free white hireling, the disadvantages will not all be found on one side. If they were, it might impeach the justice of Providence; for, let it be recollected, that millions of human beings are, and have been, from the earliest periods of history, subjected to this state, without any fault of their own, so far as we know. Why, then, should they be more miserable, as a matter of necessity, than those who have escaped this fate without any merit of their own? We cannot bring our minds to such a conclusion, and shall proceed to give our reasons why we believe there is not that wide disparity in regard to the enjoyments of this world between the slave and the freeman, which has lately called forth such 3 burst of philanthropy.

In casting about for the great and universal motives and excitements to human action, at least in a state of civilization, we shall find that the two principal objects of the exertions of man are, first, to acquire the means of enabling him innocently to gratify that passion which is essential to the great scheme of Providence, and in the absence of which the world would be a lifeless desert; and, secondly, to guard against the usual consequences resulting from such gratification; in other words, to maintain his wife and children, and provide for their subsistence after his death.

Hence the first exertions of a free civilized man are devoted to preparing himself, by the habits of labour, the acquisition of a trade or profession of some kind or other, for acquiring the means of marrying and settling down in life, without entailing distress on his wife and children; and the second, to save enough to support them in case he should be Suddenly called away. There are exceptions to these universal motives of action, yet still it cannot be denied that a vast majority of civilized men come under the above description. Their whole lives are spent in qualifying and exerting themselves to sustain the relations of husband and father. For this their early childhood is subjected to the confinement and discipline of schools; for this their youth is consumed in the acquisition of a trade, or in the acquirement of that knowledge which is necessary to some profession or business ; for this a great portion of grown-up men labour incessantly from manhood to old age, often, very often, without success, and always with a ceaseless anxiety, which robs those labours of their wholesome influence on body and mind — and, after all his cares, his industry, and economy, he dies, perhaps, leaving his children destitute of provision, to the mercy of the world, and the protection of Heaven.