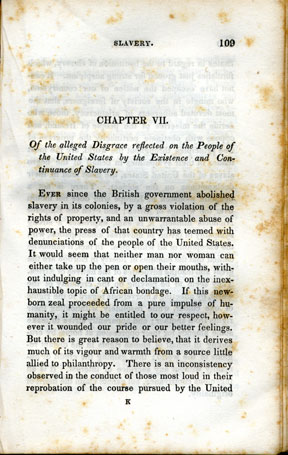 SLAVERY IN THE UNITED STATES
By J. K. Paulding
Published in New York in 1836
CHAPTER VII.
Of the alleged Disgrace reflected on the People of the United States by the Existence and Continuance of Slavery.
6,909 words
EVER since the British government abolished slavery in its colonies, by a gross violation of the rights of property, and an unwarrantable abuse of power, the press of that country has teemed with denunciations of the people of the United States. It would seem that neither man nor woman can either take up the pen or open their mouths, without indulging in cant or declamation on the inexhaustible topic of African bondage. If this newborn zeal proceeded from a pure impulse of humanity, it might be entitled to our respect, however it wounded our pride or our better feelings. But there is great reason to believe, that it derives much of its vigour and warmth from a source little allied to philanthropy. There is an inconsistency observed in the conduct of those most loud in their reprobation of the course pursued by the United States in regard to the institution of slavery, which furnishes just ground for strong suspicion. It cannot have escaped the notice of our countrymen, who mingle in the society of foreigners, that the most devoted adherents of aristocracy, those who deride the miseries of the people of Ireland, and oppose with obstinate pertinacity the progress of free principles throughout the world, are the most tender in their sympathies in behalf of the negro slaves of the United Slates, the most loud in their declamations on the subject. There is not a despotic monarch in Europe who does not mourn over the wrongs of Africa; and even the Emperor Nicholas himself, it is said, expresses a strong sympathy in favour of universal emancipation, with the exception of all white men. In fact, it cannot be denied that the enemies of liberty in Europe are the great and leading advocates of the natives of Africa. They seem to be playing on the credulity of the world, by affecting a marvelous regard to the rights of one colour, while resolutely withholding their rights from another; and apparently strive to make some amends for their oppression at home, by crusading in behalf of human rights in the distant regions of the world; thus gaining the credit of humanity without any sacrifice of interest. It is an ingenious contrivance, but cannot claim the merit of originality.

Be this as it may, there appears a wonderful unanimity in this sortie of the holy alliance in behalf of the slaves of the United States. Church and king, bishops and nobles, conservatives and liberators, seem all to have gathered themselves together and become our instructors in the practical application of our rights and our duties. Clergymen, bachelors of arts, travelers by profession, petticoated political economists, old women, and fugitives from justice, flock among us to become our teachers in the science of humanity, and expound the mysteries of revealed religion as well as natural law. But truly it hath been said that republics are always ungrateful, and nobody seems to thank them for their good offices, except their fellow labourers, the abolitionists.

There is, however, one extraordinary exception to this union of souls, and that is Mr. Daniel O'Connell, who has more than once invoked the vengeance of Heaven on this devoted land, which, while it holds out freedom and competence to hundreds of thousands of his starving countrymen, who flock hither as to a refuge and a home, wickedly and indecorously declines a compliance with his exceedingly rational, practicable demands for immediate abolition—in other words, for the creation of millions of paupers and vagabonds. This would at once degrade our slaves to the level of a large portion of his fellow subjects. We say degrade, for the slave of the United States, living in perfect security, and exchanging his labour for protection and maintenance, is to our mind a far happier as well as more respectable being, than the miserable pauper white man subsisting on a wretched pittance, bestowed without charity, and received without gratitude.

Mr. O'Connell, the champion of Ireland, and its prospective liberator, has declared war against us in the true spirit of “mountain-dew" eloquence. He calls us "traitors and blasphemers, a congregation of two-legged wolves—American wolves"—doubtless the worst of all wolves—" monsters in human shape, who boast of their humanity and liberty, while they carry the hearts of tigers within them." "If," continues Mr. O'Connell, "I ever find leisure to write to my countrymen in America, I will conjure them to laugh the republican slaveholders to scorn. I will tell them, whenever they meet an atrabilious American, to call out to him Negro. If the black skin of the African is sufficient to mark him for a slave, his yellow skin has no right to claim an exemption."

Such an experiment might be rather dangerous to his countrymen in the United States. The aforesaid "atrabilious" gentlemen are not apt at putting up with insults; and if Mr. O'Connell himself were to venture on a pilgrimage hither, and utter such sentiments, there is not a gentleman in the southern states that would not promptly bring him to a severe reckoning. Mr. O'Connell, however, has already declared his intention never to honour us with his presence. This is a sensible mortification to the people, and especially the paupers of the United States, who it is understood had serious intentions of getting up a subscription in aid of the fund for supporting his patriotism.

To be serious, however Mr. O'Connell is doing much harm to his countrymen in the United States by his intemperate denunciations. He will do still more should he ever write the letter he proposes. He may be assured that if he does, and they should follow his advice, that cordial sympathy for the wrongs of Ireland, and that generous hospitality which have ever been shown to the emigrants from his country, will give place to feelings far different. An interference, as a body, with the relations of master and slave in the United States, will for ever shut the door against all future emigrants, or, at least, prevent their ever becoming citizens of this land of "two-legged wolves."

In order, however, so far as it may be in our power to prevent the intemperance of Mr. O'Connell from operating to the prejudice of his countrymen in the United States, we feel it our duty, as friends of Ireland and Irishmen, to vindicate him from any intention whatever of wounding the feelings or calumniating the character of our country. There is, in our minds, no doubt that he really intended these wrathful denunciations as an ebullition of gratitude for the kindness with which his exiled brethren have ever been received into the bosom of our country. Mr. O'Connell is a native of Ireland, that generous, warmhearted, hospitable land, whose people may justly claim from all nations that welcome which they never fail to give to the stranger and sojourner among them. But no one will pretend to deny, that with all their high qualities of head and heart, their wit, their eloquence, and their towering imagination, they are prone to that figure of rhetoric called a bull; which consists in a happy substitution of what they do not mean, for what they really do mean. The origin of this phrase is said to have been a blunder which occurred a long while ago in classic old Tipperary, where a worthy Milesian mistook a bull for a cow, and attempted to milk him at the horns. There can be little doubt that Mr. O'Connell stood in this curious predicament. He certainly intended to pour the milk of human kindness into our bosoms, and pay us some handsome compliments on the score of the good old fellowship which has so long subsisted between the two countries. But unluckily for us, a great Milesian bull came in his pathway, and caused such confusion in the fertile bog of his understanding, that the unfortunate gentleman perpetrated a catachresis, and fell into an outrageous strain of objurgation. Like poor Europa, he was ravished by a bull; and it is earnestly requested that no liberal-minded American will withhold his sympathy towards the liberator, for having thus done homage to the genius of his country in, as it were, attempting to milk a bull by the horns.