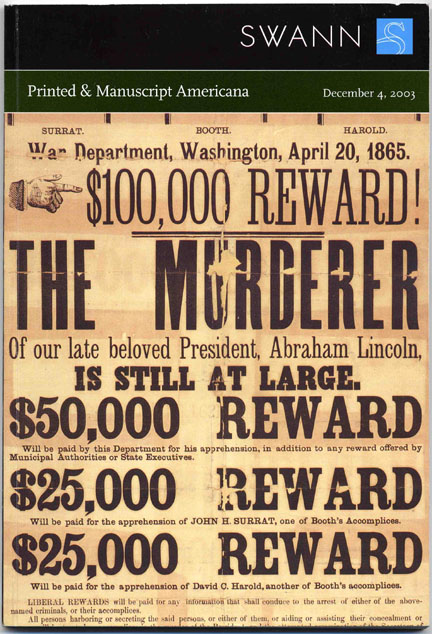 The Swann sale is very strong in interesting Americana.

On Thursday December 4th Swann Galleries in , in two sessions, is offering 511 lots of printed and manuscript .  For collectors there is a great deal of worthwhile material to consider.  Marquee items include Samuel Colt’s copy of McKenny & Hall, the first appearance of the Book of Mormon and a private collection of American almanacs.  There is enough important material that a 1524 Cortes Praeclara Fernandi, printed in in 1524, is not listed among the most important items.  On the auction catalogue cover is a assassination broadside dated , offering a $100,000 reward for the murderer of the late President.  Described as “’s most famous reward poster issued only days after the assassination,” it is estimated at $15,000 to $25,000.  This is an important sale.For Americana collectors of all descriptions there is a wide variety of less expensive material as well. Here are some representative items.

This is the suppressed critique of New Yorkers, Gotham and the Gothamites; a Medley.  And the description reads on, “This was suppressed and the author and publisher... both imprisoned and fined.  It is a satire on the New Yorkers.”  The date is 1823 and the estimate $500 to $750.  Does nothing change?

And then there are American almanacs from the 18th and 19th centuries.  In the sale they comprise lots 445 to 511 and include, in total, 903 copies.  For those with an interest in very local material these lots represent an unusual opportunity to obtain, in some cases, large lots of relatively obscure material.  The estimates are modest but this is desirable material that will go higher with complete justification.

Supporters of will be interested in lot 280, Journal of the Proceedings of the Convention...[concerning] the admission of into the .  history students may want to acquire this material to search for defects in the process by which their football rivals gained admission to the .  If you can’t beat ‘em on the football field beat ‘em in court.

Students of Spanish and residents of will be interested in a bound volume containing 179 royal decrees, including broadsides issued in between 1811 and 1813.  This is described as “an impressive collection of Mexican government documents” issued during the movement for independence.  It is estimated $5,000 to $7,000.