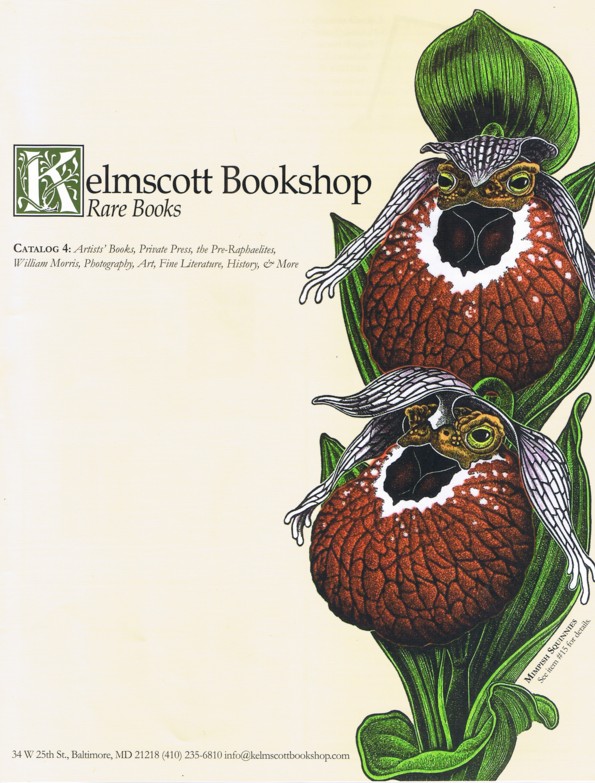 Kelmscott's Catalog 4 with a couple of

Kelmscott Bookshop Rare Books has released their Catalog 4 of Artists' Books, Private Press, the Pre-Raphaelites, William Morris, Photography, Art, Fine Literature, History, & More. To that list we can add "Baltimore." As the Kelmscott name implies, you can expect many works of artistic quality from fine presses in their catalogues. However, as noted, there is also more. Here are a few of the items now available.

William Morris' accomplishments were so diverse as to be hard to imagine for one person - literature, poetry, art, architecture, printing, design, and probably anything else he put his mind to. His later years were spent operating the Kelmscott Press, inspiration for this bookshop. Item 42 is a copy of his book, News From Nowhere, which Kelmscott describes as "his most famous book." It depicts a utopian new world living under the socialist ideals Morris held. This is one of 250 copies of the 1891 large paper edition and contains a rare inscription from Morris. It is to his daughter, Jenny, who suffered from ill health and was very close to her father. Priced at $9,500.

Item 27 is a Pre-Raphaelite Aeneid of Virgil in the Collection of Mrs. Edward Laurence Doheny of Los Angeles, Being an Essay in Honor of the William Morris Centenary 1934. Estelle Doheny was the wife of oil tycoon Edward Doheny, who with the encouragement of her husband's attorney and noted book collector Frank Hogan, became probably the greatest woman book collector ever, and one of the greatest without regard to gender. Much of her collection, left to a small seminary in California after her death in 1958, would be sold 30 years later for almost $38 million. Mrs. Doheny was a Morris collector, and this item celebrates one of Morris' greatest works that she possessed in her collection, an illuminated manuscript Aeneid he never quite finished. It is signed by Mrs. Doheny. $625.

Item 15 is a 2007 work from the Lone Oak Press with the unusual title of Mimpish Squinnies: Reginald Farrer's Short Guide to Worthless Plants. This is a fine press limited edition, #23 of just 30 copies of a work written by the turn of the century British writer and gardener, with illustrations from Abigail Rorer. Rorer has drawn entertaining "portraits" of the disliked plants to accompany Farrer's humorous comments about them. The strange title is one of the nonsense words Farrer devised to describe things, and it certainly sounds fitting for unpleasant vegetation. $900.

For those who appreciate photographs from the theater, particularly the 1940s, here is a one-of-a-kind collection. Dr. Leslie French was a prominent Washington physician and amateur photographer. He would take his camera to the theater where he snapped these 400 black and white photographs, apparently from the orchestra seats. They are filled with images of famous actors and actresses, including Katherine Hepburn, Gregory Peck, Helen Hayes, Ronald Reagan and soon-to-be first wife Jane Wyman, Mickey Rooney, Peter Lawford, Rex Harrison, Glenn Miller, Ed Sullivan, and many more. The photos have been mounted on 72 cardboard sheets with handwritten identifications. Item 50. $1,700.