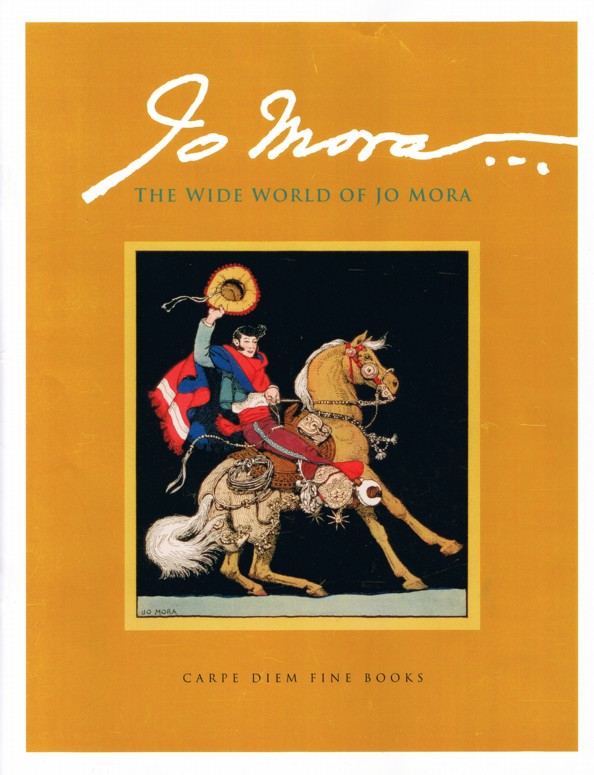 We recently received our first catalogue from Carpe Diem Fine Books, and it is dedicated to one individual that some of you may not know. The man is Jo Mora (or Joseph Jacinto Mora), an artist, illustrator, sculptor and writer, a man aptly dubbed the "Renaissance Man of the West." Mora was born in Uruguay in 1876, but his parents moved to America while he was still a young child. He grew up and was educated in the Northeast, but around the turn of the century traveled west and fell in love with the country. He remained there the remainder of his life, practicing various forms of art, and often living with the indigenous people or other inhabitants of the American Southwest. Many of his illustrations were of the West, but later in life he began writing, particularly children's books. Mora died in California in 1947.

It would not be accurate to claim widespread fame for this talented artist. He has a fervent group of followers, both those who collect his work or display it for others to learn and appreciate. However, for most people, Mora probably is obscure. This catalogue will help those unfamiliar, or only vaguely familiar with the artist learn more about him, and provide those who collect his work the opportunity to find some of his more difficult to locate items. As Peter Hiller, the Jo Mora Trust Collection Curator notes, "The publication of this catalogue by Mary Hill and James Bryant, co-owners of Carpe Diem Fine Books...serves as more than a sales venue, it also presents a wonderful opportunity to glean tremendous insight into the numerous creative efforts of Jo Mora." Here are a few samples of the works offered in The Wide World of Jo Mora by Carpe Diem Fine Books of Monterey, California.

Item 20 is one of the earlier Mora titles. It is a 1900 edition of The Animals of Aesop, featuring Mora's humanized animals which would become a part of his repertoire, especially for children's books, the remainder of his life. Priced at $1,500.

Here are two of his maps, or "cartes" as he called them. These are for California, though he created many others. Mora's cartes were maps that were filled with details of places and features, shown both on the territory depicted and along the sides of the map. He somehow manages to depict everything in California (or at least it seems that way) on his maps. Item 61 is his first variation of California, created in 1927. This one is inscribed and signed by Mora, which Carpe Diem notes he must have done on occasion, but only rarely as this is the first such signed map they have seen. $1,250. Item 63 is a copy of the second variation, commissioned by the Del Monte Canning Company as a promotion in 1945. It contains features not present on the first map as they did not exist at that time, such as the Golden Gate and Bay Bridges. $900.

Item 10 is a 1934 second printing of Mora's A Log of the Spanish Main. This was the first work he both wrote and illustrated, but it is not a typical book. It is a logbook for cruises offered by the Grace Lines. The cruise line simply bought up all of the copies and offered it to their passengers. These cruises began in New York and proceeded through the Panama Canal and up the west coast of America. The logbook contained maps and descriptions of the various cities visited, along with drawings of pirates who, fortunately, were no longer active in 1934. This copy was owned by one Laura C. Hedden, who took it on cruises both west and east in 1936. She has added extensive notations, and the copy is filled with various clippings, souvenirs, and rare ship brochures illustrated by Mora. One newspaper clipping notes the marriage and honeymoon cruise by actor Dick Powell and actress Joan Blondell. Powell and Blondell have inscribed this copy. $1,200.