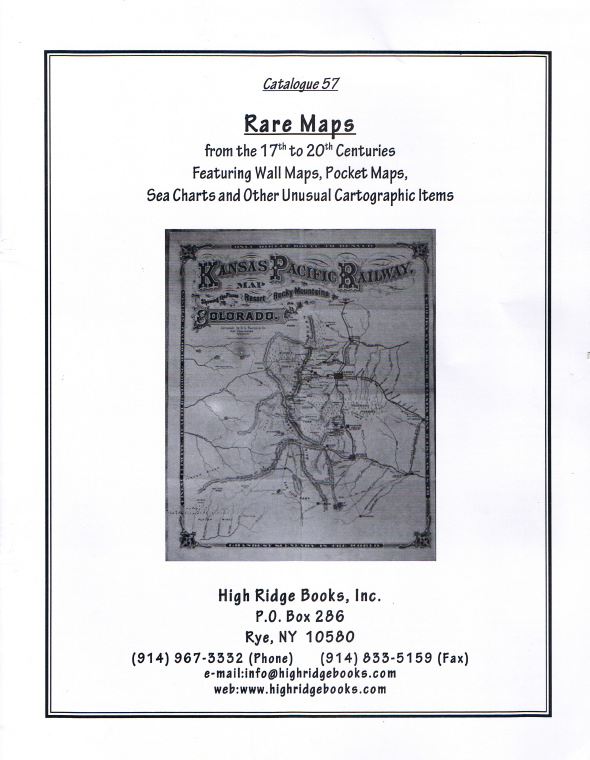 This month we have a new catalogue for the map collector from High Ridge Books. Along with Catalogue 57, it carries the lengthy title of Rare Maps from the 17th to 20th Centuries Featuring Wall Maps, Pocket Maps, Sea Charts and Other Unusual Cartographic Items. It deserves a long title as there are 321 maps being offered. Most are of North America, though there are a few of Europe and South America. They range from nationwide maps of the USA to state, county and even community maps. Most are printed, but a few are hand-drawn manuscripts. The earliest ones tend to be European or from America's east coast, but later ones take us into the great American West. Some came from atlases or other books, but most were published as standalone items. Maps have become highly collectible in recent years, and if you are among those who see the world as a map, this is a catalogue you will want to read. Now, it's time to look at a few of the items being offered.

Item 41 is a map from a name beloved by all American patriots - Nathan Hale. It is a map of New England, with counties outlined in color. Northern Maine is included through an inset. This map was published in Boston in 1826, which may make you wonder how Hale accomplished that feat. Didn't he give his life during the Revolution, and wasn't his one regret that he had but one life to give to his country? Did he actually have another? Unfortunately, no. Nathan Hale, the mapmaker, was the better-known Hale's nephew. Priced at $5,750.

Item 4 consists of six early manuscript maps from Massachusetts. They range from 1740-1775. Four were drawn by surveyor Benjamin Hammond, who died in 1747. Another is dated 1775 and drawn by his son Barzillai. For those unclear, Barzillai is a biblical name, though not one of the better-known personalities of the Good Book. These maps include property on Cape Cod and Martha's Vineyard. One of the property owners was Abraham Chase, whose Martha's Vineyard land would be worth far more today than when he inhabited the small, isolated island. $1,750.

Item 30 is another manuscript map, this one drawn by Nathan Baker of northern Maine around 1818. This is a carefully drawn map of rivers and lakes in the far northern part of this far northern state. Indeed, it even runs into New Brunswick. The border was not clear in those days, and Nathan and his son John Baker were among those who felt the border should run even farther north. $12,500.

Item 77 is not a map, but there is a justification for it being here. It is a print by Lewis Robinson, The Resurrection of Jesus Christ, from 1831. It depicts Christ rising from his tomb as soldiers recoil in awe. The reason for it being in this catalogue is that Robinson was by trade a printer of maps rather than an artist. He published maps, primarily of northern New England, from his home in Vermont for 25 years, this being the bulk of his work. $1,250.