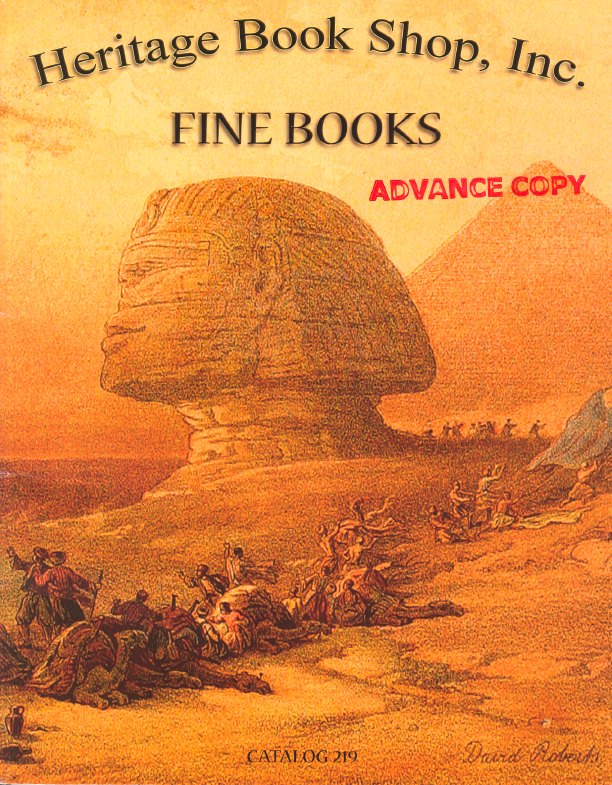 The Heritage Book Shop of Los Angeles has issued its 219th catalogue of Fine Books, offering 200 items of top quality and significance. The thread that runs through this catalogue is the significance and collectibility of the works, rather than the particular subject matter. There are works of history, literature, exploration, science, religion, art and so on. Most are uncommon if not rare, and "antiquarian" describes the majority. There are even a few pieces of incunabula within this catalogue. For collectors on the higher levels, this is a compilation worth examining. Let's take a brief look inside.

Item 19 is a first edition of the first book about the sport known as football in most of the world, or soccer in America. The book goes all the way back to 1580, and some may be surprised to learn it was published in Florence. The title is Discorso sopra il giuco del calico fiorentino, by Giovanni de Bardi. The book traces the sport's history back to ancient times and explains its rules, in what seasons it should be played, how to prepare the field, and such. Priced at $20,000.

Here is another first account -- A New Discovery of a Vast Country in America...Between New France and New Mexico, by Louis Hennepin. This is a 1698 first issue of the first edition in English of Father Hennepin's travels through the heart of America when much of it was still unknown to anyone but the Indians. Hennepin traveled the Mississippi with La Salle in 1678, but when the latter returned to France, he went on as far as St. Anthony's Falls, near present-day Minneapolis, the first white man to do so. Hennepin also provided the first eyewitness description of Niagara Falls and his book includes the first engraving of the falls published. Item 108. $6,000.

This was a unilateral proclamation by the United States, but for the most part it held up, and as a result greatly changed the face of the Americas. On December 2, 1823, President James Monroe proclaimed that from that day going forward, any attempts by European powers to colonize territory in the Western Hemisphere would be looked on as a hostile act by the United States. A broadside containing this announcement was printed that day, only three or four copies of which are known to survive. Item 138 is the first regular newspaper printing of this proclamation, now known as the "Monroe Doctrine," made from the same press two days later on December 4. The newspaper was the National Intelligencer from Washington, and it may be even rarer than the earlier broadside. The doctrine proved to be of great importance as once a weakened Spain, the dominant colonial power in South and Central America, lost its ability to maintain control of its colonies during the 19th century, no other European powers were able to move in. While most of the remainder of the non-European world was under the domination of European countries by the early 20th century, the Americas remained free of such colonization. $20,000.