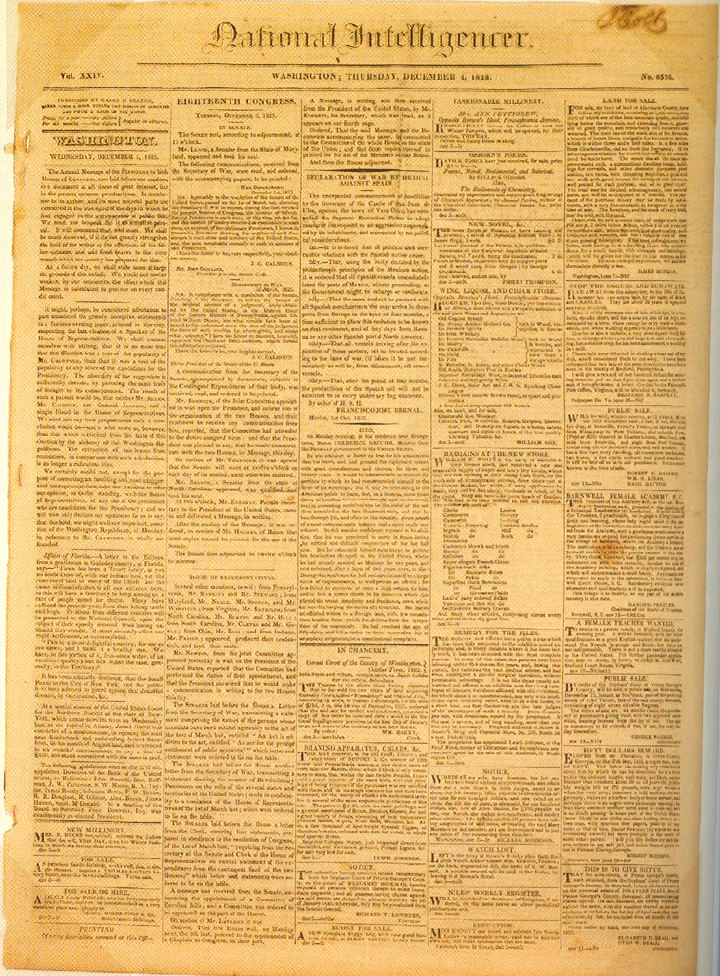 One of the earliest printings of the Monroe Doctrine appeared in the National Intelligencer.


Item 3 is a first edition of Introductorium in astronomiam by Arab astronomer-astrologer-philosopher-mathematician Albumasar (Abu Ma'shar). Albumasar lived in the 9th century in Baghdad, at a time when there was apparently more thinking taking place in that troubled city than there is today. Once his works were translated to Latin in the 12th century, he evidently became a very influential thinker for the West. Much of Aristotelian thought first reached the West through Albumasar, who had access to Aristotle's writings long before they were translated to Latin. This edition of his circa 850 work was published in 1489. $30,000.

Item 79 is a classic economic study and a look at the poor in late 18th century England. The book is The State of the Poor; or, An History of the Labouring Classes in England, from the Conquest to the Present. Written by Sir Frederic Eden and published in 1797, it describes the conditions of and causes for the poverty in which the lower classes lived, and supports his conclusions with reams of reports and data. Eden is credited with establishing procedures for sociological study with his thoroughly documented, three-volume work. $13,500.

Captain George Shelvocke was something of a pirate and insubordinate, yet he went on to secure both wealth and prestige in England during his relatively short (38 years) lifetime. He also left us some of the earliest observations of California, at least its lower section (Baja). Shelvocke was given command of a private ship in 1719, authorized by the British to engage in "privateering," legalized piracy, against Spanish ships. His ship accompanied another under the leadership John Clipperton, but when he got the chance off the coast of South America, he slipped away from his superior. Shelvocke than raided numerous Spanish vessels along the western coast of South America and proceeded as far north as California. At the time, maps still depicted California as an island. Shelvocke would explore the area before returning home via Macao. He would be charged with piracy on return, but quickly acquitted, and would then write this book, A Voyage round the World By Way of the Great South Sea. In the book, he gives some of the earliest information about California natives, and claimed there was abundant gold dust to be found, but his specimens were supposedly lost. Item 175 is a first edition of his book, published in 1726. $8,500.

You may find the Heritage Book Shop online at www.heritagebookshop.com, telephone 310-652-9486.