Lives from the Past Rediscovered by Langdon Manor Books 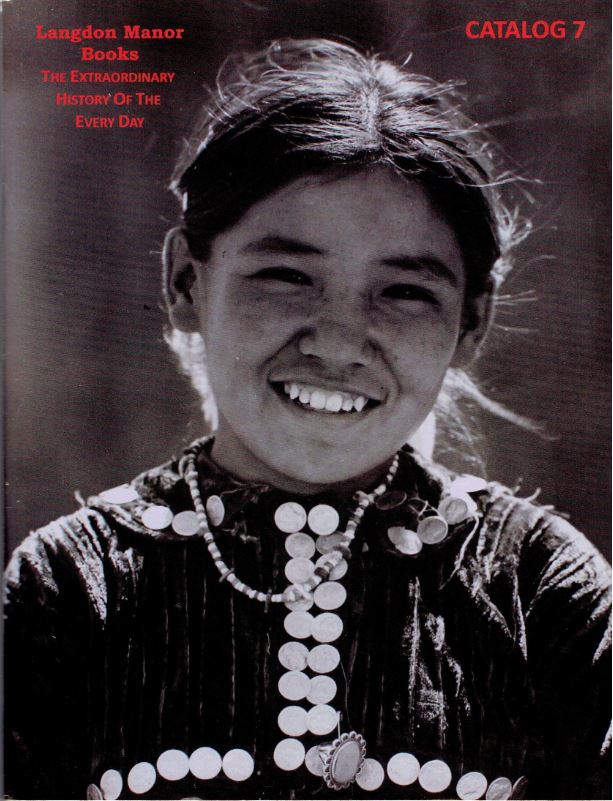 Catalog 7 of the extraordinary.

Langdon Manor Books, purveyor of "the extraordinary history of the every day," has issued their Catalog 7. The material they offer, often archives, come from "ordinary" people, but no one is ordinary, and often these people are truly remarkable. Most are no longer living, but they lived interesting lives, and what they created and collected generally touches their most significant times. What we see here is fascinating, at times uplifting, at other times dark and foreboding. This is life. Here are a few examples.

We begin with a lengthy letter from a California Gold Rush prospector and entrepreneur, an optimistic tome with an unexpected, rather than happy, ending. Miles Palmerton sent this approximately 1,400-word letter home from Sacramento in 1851. He had come from Saratoga, New York. Palmerton writes that he started by owning a store in Fiddletown (west of Sacramento), abandoned it with $600 in his pocket, bought a claim, which he traded "for a horse and rode him out of the diggins for some better place." He next purchased a claim for a quartz mine with some partners, hit a vein, and sold shares in the mine. Palmerton noted, "That is the way with mining, a man may work a year and not more than make his board and then in a week make up for the whole year." He said he wouldn't sell his share for $5,000, and yet he quickly turned to looking for gold. "I believe there will be more gold taken out this summer than there has been taking for the last two years... There is gold all through the earth." Next, Palmerton writes of the wonders of California. "We can have vegetables fresh the year round in the valleys. We have no winters here. It is the greatest country for stock I ever saw...there is the prettiest valleys here I ever saw." He continues in that vein until returning to the other. "I will know in a few weeks how our vein will turn out and I will let you know if it proves to be rich and extensive. We have enough claimed for 100 fortunes." He did not let them know. The family never heard from Miles again. A note has been written on the margin in a different hand - "Last letter from Miles P - fate unknown - thought murdered. Item 13. Priced at $575.

Next we have a collection of over 100 lantern slide glass transparencies from Frank E. Moore's production of the Song of Hiawatha. Longfellow's poem was first turned into a performance at the turn of the century by Louis Olivier Armstrong. He put together a large cast of American natives, and created a play based on the poem which toured America and later spent six months in London. Armstrong came up with the idea while on a camping trip with Longfellow's daughters. He discontinued the show around 1905, but not too long thereafter, Moore came up with his own version. He too gathered a large cast of Indians from various tribes, east and west, but rather than have them speak, they simply acted while a narrator read the poem. They toured, performed traditional dances, wore native clothes, often pitched teepees along a stream and performed to audiences on the other side. These images were copyrighted in 1908 and appear to be taken from the show. In 1912, Moore used his show to create the first film using a cast of entirely Native Americans. It had a cast of 150. Parts of it have been lost, but the Library of Congress has an abridged version. Here is a clip from YouTube. We don't know when the performances were discontinued, but the latest reference Langdon Manor found came from 1914. Item 33. $4,500.

There is another Native American archive offered, but this one is too extensive to describe in a short review. It was compiled by Frank S. Cummings, an engineer from California who became friendly with Harry Goulding. Goulding had set up a trading post and lodge in Monument Valley, near the Arizona-Utah border and adjacent to Navajo land. Goulding succeeded in convincing John Ford to shoot several of his western movies in Monument Valley. Cummings was riding with Goulding one day when he stopped to give a ride to some Navajos making a long trek on foot back home. It was the start of a long friendship between Cummings, an amateur anthropologist, and various Navajo and other natives. This archive mainly comes from 1950 through the middle 1960s. It consists of over 1,000 photographs and slides, 17 hours of audiotape, and several hours of videos. The tapes contain numerous interviews, in English and native languages, many of aged tribe members recounting stories that went well back into the 19th century. They tell of forced movement, battles with both whites and Utes and other tribes, and the hardships of ordinary life they faced. The photograph on the cover of this catalogue is one of the thousand-plus in the collection. If this is of interest to you, you should contact Langdon Manor for more information as it is unlikely there is anything else quite like this. Item 32. $55,000.

This next photo album is not of an ordinary person. It documents a major trip by a President of the United States, to promote an idea that proved to be ahead of its time for his country. In September 1919, President Woodrow Wilson headed west on a trip to convince the American public to support the formation of the League of Nations. The Great War had been won, and Wilson believed the League could serve as a deterrent against future wars, providing a place to reconcile differences while providing for mutual defense of its members. However, the idea had much opposition, particularly from Republicans, who believed America would be giving up too much of its sovereignty. So, off went Wilson on a strenuous tour. This album documents his time in Seattle on September 13. The album has 118 leaves, each with a photograph printed on it. The President is seen on arrival, in a parade through the streets of Seattle, on ships in the harbor, along with numerous other photographs of ships, sailors, and other events of the day. Whatever success Wilson had with the public did not transfer to the Senate and he could not get America to join the League of Nations. Meanwhile, Wilson returned to the White House later that month exhausted, and on October 2, suffered a stroke. For the remainder of his term, Wilson was limited in his activities and many believe his wife was effectively President for the rest of his presidency. Item 71. $1,200.

The worst race riot in Arkansas history, perhaps the country, took place at this time. Black sharecroppers were meeting to consider organizing. The area around rural Elaine was 10-1 black, but white landowners held all the cards. They determined what the back farmers received for their cotton, and forced them to buy from overpriced plantation stores. The farmers were always in debt. A pair of deputized white men arrived at the meeting, shots were fired under unknown circumstances, one of the whites killed. Rumors were spread, with the help of the local press, that the blacks planned to kill all whites in the area. Five hundred to 1,000 whites, from the area and elsewhere arrived, and the killing started. By the end on October 1, 1919, 100-240 black people had been killed. Five whites died. Local and federal officials began arrests. They arrested 285 blacks, no whites. A total of 122 were indicted, 73 charged with murder, 12 convicted and sentenced to death. Eventually, six had their convictions overturned in state court, six by the U. S. Supreme Court. An account of this event from something other than a southern white perspective can be found in this rare book from 1920, The Arkansas Race Riot, by Ida B. Wells-Barnett. She was born a slave, became a journalist and founding member of the NAACP. She tells the real story, including of the beatings and electric shocks inflicted on the black prisoners. Item 5. $20,000.

That item tells the horror story in words. This simple photograph tells the story of racism in one horrible image. It is of Frank Embree of Fayette, Missouri, on July 22, 1899. He was accused of raping a white girl. Embree said he was innocent. He did not get a fair trial. He didn't get any trial. As too often the case, a mob abducted him from jail, and whipped him over 100 times. That is when this photograph was taken, his hands in shackles, clothes removed. Then the crowd, said to be of 1,000 people, lynched him. A few of those people can be seen behind Embree. In these days, when racism seems to have become more acceptable again, this photo is a stark reminder of where it can go. Item 4. $1,350.