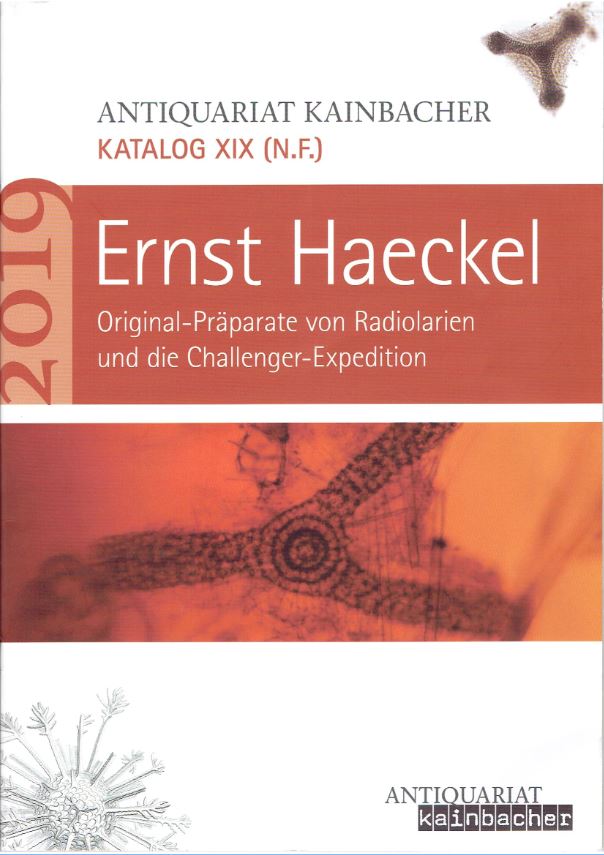 "Ontogeny recapitulates phylogeny." You probably remember that statement from high school biology, but no longer have any idea what it means. That's okay. The theory is no longer believed anyway. It was the claim that an organism during gestation repeats its evolutionary phases, reaching full evolutionary development at birth. You almost certainly don't recall who made that claim. His name was Ernst Haeckel, and he was a German biologist, marine zoologist, explorer, professor, philosopher, author, and amateur artist. He lived from 1834-1919. He studied and named many species, being noted for his study of radiolaria, microscopic sea animals that come in many amazing shapes and forms (as viewed under a microscope). Haeckel was also an explorer, making many trips all over the world as part of his studies.

The course of Haeckel's life, at least professional, was changed by one book, Charles Darwin's Origin of Species. While to many it was extremely controversial, for Haeckel it put everything together. He would be an ardent advocate of Darwinism the rest of his life. However, Haeckel would add his own theories, and this is where he becomes a controversial figure. The implications were not good. Unlike Darwin, he believed human races developed separately, and factors such as their language made them develop at different paces. The most advanced, according to his theory, naturally, were people such as himself, Caucasians. It was what became known as Social Darwinism, and effectively, racism. Promoting these views in Germany in the early twentieth century does not leave one with a great reputation today. Haeckel died before the appearance of Nazism, but his theories provided inspiration for some in that movement. Haeckel was a notable scientist, but also a pseudoscientist, as his social and moral beliefs led him afield from always employing the scientific method.

Antiquariatt Kainbacher recently published a catalogue entitled Ernst Haeckel, Original-Präparate Von Radiolarien Und Die Challenger-Expedition (original preparations of radiolaria and the Challenger Expedition). It consists of four lots, some containing multiple pieces. We will only describe the individual lots briefly. This catalogue is written in German, and understanding it in any meaningful way requires familiarity with the language. Unfortunately, I am not so familiar, so this is a catalogue that must be read by someone who speaks German. If you are such a person, and Haeckel, marine biology, evolution, or social development in Germany in the first two decades of the twentieth century are of interest, it will be most worthwhile to obtain this catalogue.

1. A specimen collected by Haeckel in 1850, when he was 16 years old, marked in manuscript. It came from his family.

2. Over 50 specimen slides, marked by Haeckel, of radiolaria gathered during the Challenger Expedition. This expedition was conducted for research in the seas all over the world by the British from 1872-1876. It was designed to learn everything possible about the world's oceans, and among the topics were its life forms. Specimens were gathered by the British with many of microscopic life turned over to Haeckel for study as an expert in the field.

3. Report on the Scientific Results of the Voyage of the H.M.S. Challenger during the Years 1873-76, under the command of Captain George S. Nares... and Captain Frank Tourle Thomson, published 1880-1895. Compiled by Sir Charles Wyville Thomson and Sir John Murray. This is the massive report on the Challenger Expedition, 50 volumes, 29,500 pages, 23 years in production. Of this, over 2,700 pages and 230 plates of radiolaria and other life forms were prepared by Ernst Haeckel. This set is in English.

4. Fifteen publications by, to, or about Ernst Haeckel. These get more into his evolutionary theories. This is where he should have quit while he was ahead. They delve into his philosophy rather than just his scientific learning.