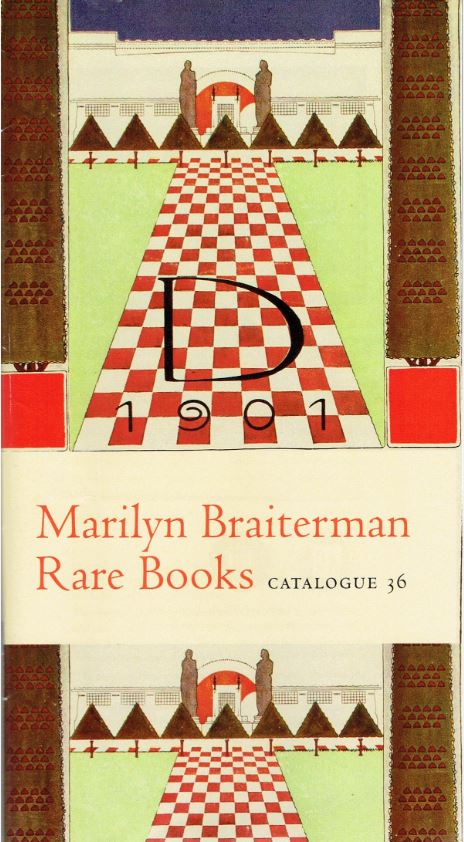 Marilyn Braiterman Rare Books has issued their Catalogue 36. There is no descriptive title and material varies. We would guess that it contains material the bookseller finds appealing, and understandably so. We will note that most of what we find is in some way artistic, rather than plain texts. Otherwise, anything goes. Here are a few selections.

We will start with a combination of surrealist poetry and art. The poetry comes courtesy of French poet Paul Eluard, the art from American photographer Man Ray. There are 12 photographs with Eluard's poems placed around the images. The photographs are of Eluard's wife, Nusch, nude. Lighting and such make them reasonably discreet. Ray's photographs have an ethereal appearance, with such techniques as double exposures and angled lighting giving them a surrealistic effect. The title of this 1935 work, published in 1,200 copies, is Facile Poemes. Item 15. Priced at $5,000.

Next we have another combination between writer and photographer. The title is The Hakone District, Illustrated by K. Ogawa, Photographer, Tokyo in Collotype with Descriptive Text by James Murdoch, M. A., published in Tokyo in 1892. Hakone is a small town west of Tokyo, a scenic travelers' destination. It is a mountainous region, featuring hot springs and a clear view of Mt. Fuji. Kazumasa Ogawa was a pioneering Japanese photographer, Japan's leading photographer of the time. He learned English while in school, which he employed to study photography in America for two years before returning home. James Murdoch was Scottish, but he traveled to the East, first for several years in Australia, and then for many more living in Japan. He became a professor in Japan, and wrote many books and articles about the country. He later returned to Australia and became a government advisor on Japanese issues as well as a professor there. Item 41. $850.

Here is one more item from Japan. It is a brochure for The Jewel of the Orient, the Imperial Hotel in Tokyo. It is undated but circa 1923. The designer for this spectacular hotel was America's most noted architect, Frank Lloyd Wright. The idea was to have a hotel in Japan that felt sufficiently "at home" to westerners that they would feel comfortable staying there. The brochure notes that the Imperial Hotel "is neither of the East nor of the West, but might fittingly be called a blending of the ideals of the two civilizations." Item 66. $450.

Item 17 is a "recent" edition of a very old poem. The title of the poem is Flower and the Leaf, and it was written around 1470. It was once believed to be the work of Chaucer, but is now labeled as anonymous, with the writer, like the narrator of the poem, possibly a woman. This edition is only a century old, it having been published by Edward Arnold and Samuel Buckley in 1902. The printer was the Essex House Press of C. R. Ashbee. Charles Robert Ashbee was a proponent of the Arts and Crafts movement and an admirer of one of its leaders, William Morris. Like Morris, he was also an ardent socialist, operating the Guild and School of Handicrafts, which taught various handcrafts to poor young people. He wasn't originally in the printing business, but when Morris died in 1897, he wanted to keep up the fine press tradition Morris had established with his Kelmscott Press. So, Ashbee bought Kelmscott's presses and hired most of its workers. He then formed the Essex House Press, which published around 90 books from 1898-1910. The Essex House Flower and the Leaf was published in 165 vellum copies. The illustrations and historiated initials were hand colored by Edith Harwood. $2,500.

Next we will take a look at London as it is no more. Item 44 is Select Views of London; with Historical and Descriptive Sketches of some of the Most Interesting of its Public Buildings, by John Buonarotti Papworth, published in 1816. Papworth was an architect and illustrator, who produced many of these illustrations for a periodical published by Rudolf Ackermann. They were compiled for the first time in book form for this book, though apparently some of the illustrations were produced by fellow architect Augustus Charles Pugin. Papworth provided the text. The drawings have been hand-colored. There are 76 plates along with five folding panoramas. Not surprisingly, many of the buildings herein depicted no longer exist. As an aside, Papworth also wrote what may be the first book about dry rot. $6,000.

Item 10 is a 35-page illustrated brochure for the Humpty Dumpty Circus. 10,001 Astonishing Tricks, Unbreakable Jointed Figures. It was published in 1928 by the A. Schoenhut Company. They had already been manufacturing toys for three decades when they introduced the Humpty Dumpty Circus in 1903. Starting with just a few figures, it grew wider and wider over the years, as more figurines were added. The figurines, both human and animal, had numerous joints, enabling children to set up their circuses in all sorts of ways. They made many different toys, but the circus was their most popular. Alas, Schoenhut could not survive the Depression and the company went out of business in 1935. Their toys are highly collectible today. $350.