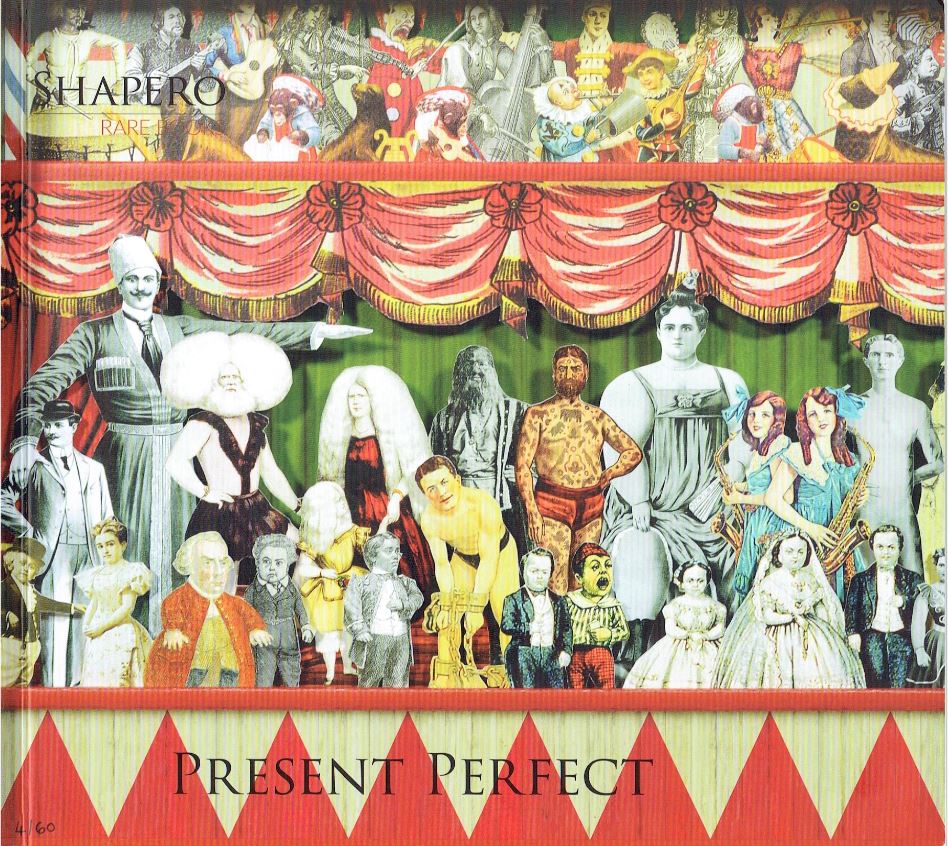 We have received a recent catalogue from Shapero Rare Books entitled Present Perfect. While not quite sure of the title's meaning, I suspect it may have originally been published during the holiday season. Present, in the alternate meaning of now, doesn't apply very well to these mostly older books. If there is any doubt, the table of contents makes it much clearer what sort of items can be found within. Here it is: Fiction, Prose & Poetry, Children's & Illustrated, Visual & Performing Arts, Special Interest & Sport, Judaica, Russian, and Modern Prints. These are a few of the items offered in this selection.

For those who who collect Charles Dickens, and few 19th century authors retain the level of following today as does "Boz," here is a set you will want. Item 14 is The Works of Charles Dickens. With More than One Thousand Illustrations including all the usual & very unusual plates, edited by Richard Garnett and published in 1900. This is a deluxe limited edition of the works of Dickens, 32 volumes in all. They are bound in red morocco. This "Manuscript Edition" was printed in just 100 copies, of which this is #36. Over 55 of the illustrations are hand-colored. They are taken from "Phiz" (Hablot Knight Browne), George Cruikshank, Daniel Maclise, John Leech, and many of the other illustrators whose work appeared in Dickens' books over the course of his career. Priced at £7,850 (British pounds, or approximately $10,154 in U.S. currency).

From writers and artists we next turn to musicians. There was none as beloved in the early twentieth century as Enrico Caruso. He was an Italian tenor with a magnificent voice and a good sense of promotion. With the development of the gramophone, an affordable means of playing records which used acoustic rather than electronic amplification, Caruso seized the opportunity. He recorded his music, making it available to a mass audience. He was, in a sense, the Elvis of his day. Item 94 is an extensive collection of Caruso material. The high point is likely the 22 signed pen and ink caricature drawings Caruso created. While not a professional artist, Caruso was surprisingly talented in these basic drawings. They depict many of the stars of the day, 12 of the characters who performed with him in the 1907 opera Salome, and Caruso himself. His self-portraits are special. There are 25 photographs of or with Caruso, one signed. There is also a signed menu, a copy of a contract, a letter written by his son long after Caruso died, and various other documents. Of particular note are three letters written by his father-in-law, Park Benjamin, to "Vallentine." Caruso married Benjamin's daughter, twenty years his junior, and Park did not approve. He writes that Caruso asked for consent to their engagement, which Benjamin says he answered with a written refusal. They married anyway. "The Marriage was wholly clandestine," writes Benjamin. He continues that Caruso is forbidden from entering his house. In a later letter, he raises the possibility that Caruso was a "war slacker," it being the First World War. Benjamin says he read that you could be drafted up to the age of 46. Caruso was, at the time, a mere 45. £11,500 (US $14,876).

Graham Greene was one of the major writers of the twentieth century, penning both serious texts and "thrillers." It is the latter for which he is best known. While having a long and successful career, he got off to a rocky start as a novelist. His first book was successful, the next two flops. He disowned them both. Probably the worst, in his eye, was the third one, of which Item 20 is a copy, Rumours at Nightfall. Green thought it stilted and pretentious, and he suppressed it. He would not allow it to be printed again, and his estate has continued that wish. Do not look for a new edition before 2061 when the copyright finally expires. For now, you will need to find a London first edition, such as this, or a first American edition if you want to judge the book for yourself. £750 (US $970).

This title sounds rather dull, but there was great emotion and sadness behind it. Item 111 is The Principal Speeches and Addresses of His Royal Highness The Prince Consort, published in 1862. The Prince Consort was Prince Albert, husband of Queen Victoria. He came from Germany and consequently was not to be King. However, this was not the typical arranged marriage for political alliances. Victoria loved him dearly. Albert died the year prior to this publication being issued, and the Queen was devastated. She never got over the loss. Queen Victoria lived for another 40 years, but she was never truly happy again. The Queen inscribed this copy to Rev. George Prothero, Vicar of Whippingham Church. She sent out a number of inscribed copies of Prince Albert's speeches to people she knew, part of her grieving process. £2,200 (US $2,829).

Item 123 is a collection of three photographic postcards of Clémentine Delait, dated 1911. Mme Delait ran a cafe in France with her husband, the Café Delait. Supposedly, Mme Delait went to a carnival, saw a bearded lady, and proclaimed she could grow a better beard than that. Her husband backed her up with a bet, and based on these photographs, I have little doubt he won. There aren't many men who can grow a beard as full as hers. The Delaits changed the name of their cafe to the Café of the Bearded Lady and she sold photo cards such as these from the premises. Mme Delait has signed the postcards. £875 (US $1,125).