Antiquarian to Modern Books and Manuscripts from Phillip J. Pirages 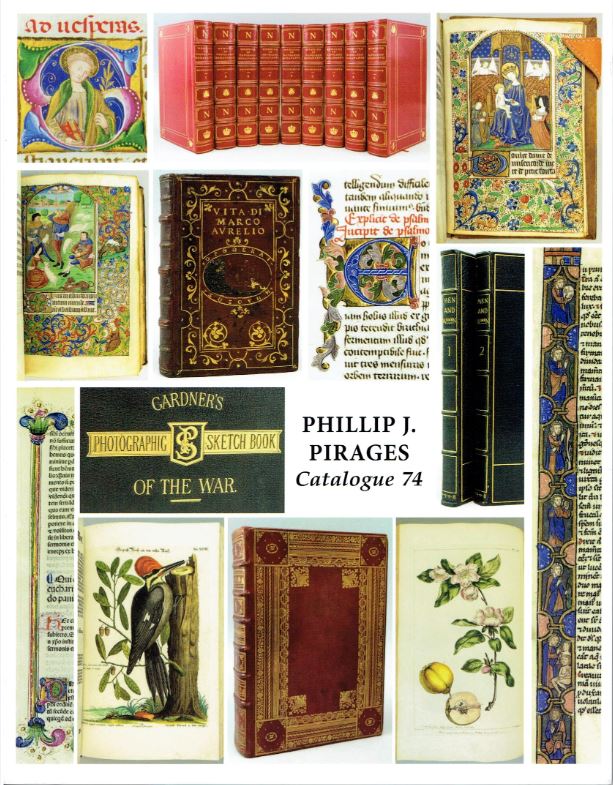 Books and manuscripts ancient to new.

Phillip J. Pirages Fine Books and Manuscripts has released the latest of their spectacular catalogues, Catalogue 74: Manuscript Material, Incunabula, and Books Printed from 1501 to Present, Including Fine Bindings and Private Press. Pirages presents material for collectors at the high end, fine books and manuscripts in a setting appropriate for the best. Descriptions are thorough, most items illustrated. Most of the works offered are beautiful as well as textual. Fine bindings, press work, and wonderful illustrations are found on most pieces. Many are very old, some predating printing, and these antiquarian manuscripts often feature spectacular illustrations and lettering. Material dates as far back as the 11th century, right up to the present. Here are a few of the selections being offered.

We start with a 13th century manuscript book that is as popular today as it was then. That, naturally, would be the Bible. This one was created in France around 1275. With 456 vellum leaves, hand writing this book took a lot of work. Add to that is that it is not just in plain text, but there are over 100 illuminated initials. Forty are four lines in height, more than 60 are six to eight lines. Many use zoomorphic illustrations, and if that isn't a word you use every day, it means they display the heads or bodies of various beasts. Apparently, this was fairly popular among bibles of the day. The largest runs the length of the page, an "I" at the beginning of Genesis which incorporates seven scenes from Creation. This is a bible of relatively compact size (6 3/4" x 4 3/8"), meaning it was portable and practical to use. It has numerous notations of later provenance and an added alphabetical index. The earliest owner was one Henri Dumont of Rieux, though it is not clear which Rieux that was. A later note says that Dumont was a former prior of Rieux and he gave the bible to the monastery. Item 47. Priced at $75,000.

Item 19 is a Papal Bull, addressed to the Archbishop of Siena on June 17, 1523. It relates to some unjustly seized property. The Bull was issued by Pope Adrian VI, and such is uncommon. Elected Pope in early 1522 at the age of 63, he only survived a little over a year and a half. Adrian was a compromise selection, European kingdoms promoting different candidates based on their own interests. Adrian had been the tutor of Holy Roman Emperor Charles V who was pleased with the selection. He rose to the papacy in the most difficult of times. European princes were in conflict with each other, the Turks were invading Europe, Martin Luther was attacking the Church as the Protestant Reformation got under way, and there was much corruption within the church. He succeeded a Medici pope, and the Medicis were not noted for running the tightest of ships. He was unable to reconcile the various national leaders, nor deal effectively with Luther and the Reformation, against whom he took a hard line. As for his attempts at reforming the church, he was not around long enough to have much of an impact. However, Adrian VI is notable as being the only Dutch pope. In fact, he was the last non-Italian pope until John Paul II, 455 years later. He is also one of only two popes to adopt their given name as papal name, he having been baptized Adriaan Boeyens. $6,500.

It is unusual to find a medical book with much common sense from the 18th century, but here is one: Medicina Flagellata; Or, the Doctor Scarify'd. Laying Open the Vices of the Faculty, the Insignificancy of a Great Part of Their Materia Medica; With Certain Rules to Discern the True Physician from the Emperick... Published in 1721, it is an attack on fraudulent medical "cures," rampant in the day. It attacks such ideas as combating the plague by smoking tobacco or firing guns in the air. The author was anonymous, but has been identified as George Cheyne based on similarities between this book and other texts he wrote. Rather than advocating miraculous potions, Cheyne advocated common sense preventive measures. He called for moderation in food and drink, healthy exercise, fresh air, and preferred a vegetarian diet. His good advice, then as now, was ignored by most, not the least of whom was Cheyne himself. He tried, and at times employed a vegetarian diet, but he was not able to stick with moderation consistently. He was highly obese and regularly in poor health. Item 125. $1,250.

Here is another book that is uncommon to find. It is a work of incunabula that is not a religious text. The title is Mensa Philosophica, and it is about appropriate behavior at the dinner table. The text itself is even older, going back to the beginning of the 13th century, with a couple of possibilities as to who is its author. This edition was published sometime between 1484 and 1487, and is one of seven incunabular editions, all rare. It recommends types and quantities of food and drink appropriate for various ages, genders, social classes, and occupations. It also offers suggestions for proper etiquette and proper table conservation. There are suggestions for topics of conversation, such as whether air is more necessary for life than food. Pirages notes that this may be a safer topic of conversation than many that arise today. No politics, please. Item 57. $16,000.

This one arises from the other end of the chronological spectrum. It is from 2019, so new that you will have to preorder a copy and await its arrival in early summer. The author is Phillip J. Pirages and the title is Letters from the 15th Century: In the Origins of the Kelmscott Chaucer Typography. Pirages argues that William Morris, the leader of the arts and crafts and private press movement that has had so many followers over the last century, was greatly influenced in his typography by early designers. Specifically, he looks at the works of four 15th century German printer-designers, Peter Schoeffer of Mainz, Johann Mentelin of Strassburg, Gunther Zainer of Augsburg, and Anton Koberger of Nuremberg. He sees great similarities between their typography and that of Morris four centuries later. However, Pirages doesn't want you to take his word for it. He provides examples. These are not just reprinted examples, but originals. This is a leaf book, and it contains leaves from 1470s editions from each of these early printers along with one from the Kelmscott Chaucer. It took a while to create this work as Pirages first had to track down defective copies of all five. There are four different bindings of this book, depending on how deeply illustrated is the Kelmscott page. The number of copies offered will be limited to 165. Prices start at $1,950.