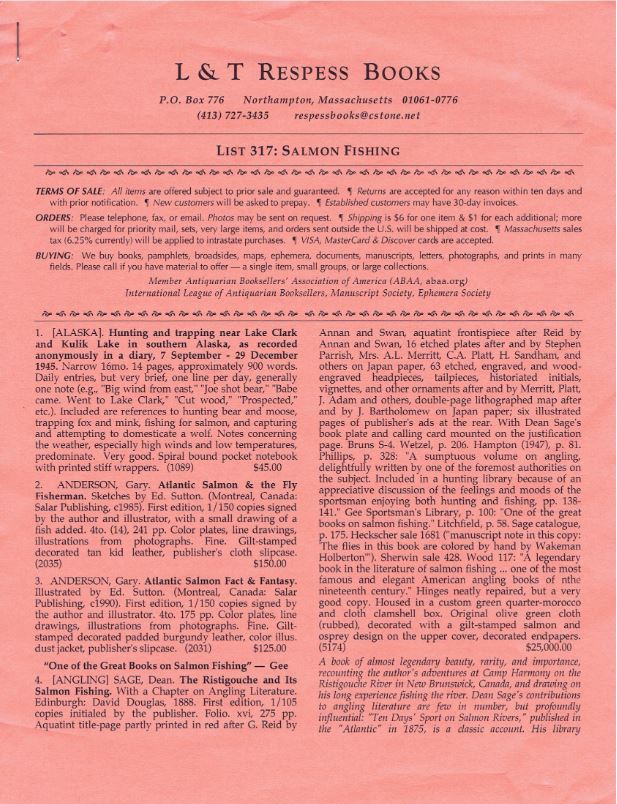 L & T Respess Books has issued their List 317, this one titled Salmon Fishing. No miscellany here. That is about as specific as it gets. This catalogue may not appeal to the average collector, but if you know where the Ristigouche River is, salmon is probably your taste. Salmon fishing is not the only sport discussed in each of these books. Some combine other varieties of fish, fly fishing, and hunting, in their coverage, but salmon is the big tuna in these books. And, while you may never make it to Atlantic Canada's Ristigouche for your salmon fishing, it being something of a playground for the wealthy, there are lots of other rivers along the Atlantic, and, of course, the Pacific, where they swim. There are many places where the water is fine. Here, now, are a few selections from this catalogue.

We begin with a book that has been called "one of the classics in literature of Canadian salmon fishing." The title is Salmon-Fishing on the Grand Cascapedia, by Edmund W. Davis, published in 1904. This is a second edition (or some consider it a second issue), published the same year as the first, both in runs of just 100 copies. This edition is expanded, 152 pages rather than 143. It was printed for private distribution by the notable private printer the DeVinne Press. The Grand Cascapedia (as distinguished from its smaller sibling) is located on Quebec's Gaspé Peninsula and is noted, you guessed it, for its salmon fishing. This book is desired for its accounts of salmon fishing and the catching of large specimens, the quality of its physical production, and its rarity. Item 29. Priced at $3,000.

As long as we are on classics of salmon fishing, this is the classic of all classics, the pinnacle of a collection focused on salmon fishing. Item 4 is The Ristigouche and Its Salmon Fishing, by Dean Sage, published in 1888. It is one of but 105 copies printed of this book that is highly sought after by collectors of angling in general, not just salmon fishing. Dean Sage was one of those who could afford to fish the Ristigouche, his father having made a fortune in the lumber business. He died in 1901 at Camp Harmony, a lodge along the river. Sage was noted as an expert on salmon fishing and his text is highly respected. However, this one is also noted for the beauty of its production. Add to that the 16 etched plates of illustrations, and 63 other features such as historiated initials, and this becomes a spectacular book. It is also quite rare. $25,000.

Next we have another man who could afford to spend part of his summers fishing in Canada. Item 86 is a photograph of Robert Graham Dun with a very large fish. It is captioned, Killed by R. G. Dun on the Grand Cascapediac [sic] River, Quebec. Can., June 29, 1886. Wm. H. Willett, Chief Guide. Weight 54 lbs. Length 4 ft., 6 ins. Girth 28 ins. Width of Tail 14 ins. In the 1840s, Dun went to work for a credit reporting firm, the Mercantile Agency. He bought it out in 1859 and changed the name to R. G. Dunn & Company. Years after Dun died, his company was merged with its major competitor to form Dun & Bradstreet. $375.

Atlantic Canada is the source of much of this material, not because the Pacific doesn't have a lot of salmon, but because the Atlantic side was more accessible to serious (aka wealthy) fishermen in earlier times. Item 21 is Nova Scotia's Fighting Fish, a promotional pamphlet put out by the Bureau of Information for the Government of Nova Scotia in 1939. This item promoted all sorts of fishing, tuna, swordfish, trout, as well as salmon. There is even a photograph of a fisherman who is noted for his novels of the West, rather than the East - Zane Grey. Grey loved to ride horses and such western-oriented activities, but he also loved to fish. He would travel all over the world to fish, and there aren't many places better for this pastime than Atlantic Canada. $25.

Item 56 is a first edition of Sportsman's Portfolio of American Field Sports, published in 1855. A second edition was released by the Derrydale Press in 1929. This early American compilation of field (and stream) sports contains 20 plates of sporting activities, each with a facing page of text. Among the subjects are trout, salmon, and bass fishing, woodcock, grouse, duck, rail, and partridge shooting, and moose and bison hunting. This book is rare and may be the first to depict American fly fishing for salmon. $1,500.

Here is another promotional item, this one for Central House, Belgrade Lakes: Maine's Famous Inland Resort. It is from around 1920. Central House, which would later be known as the Lakeshore Hotel, was popular during the first half of the twentieth century. It promoted its access to fishing for landlocked salmon and other species of fish. It contains photographs and maps for what was a lovely, though apparently not too stuffy hotel. Item 67. $75.