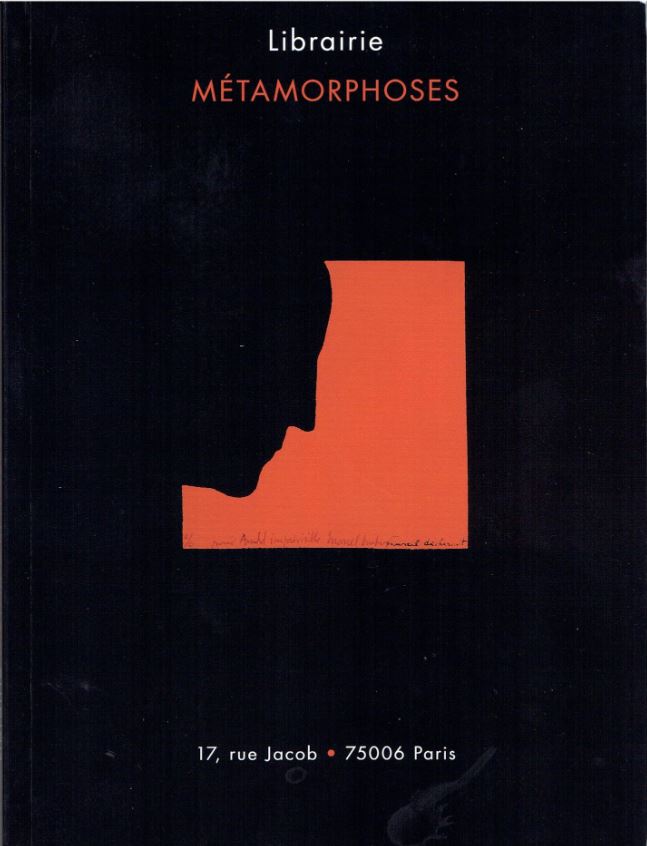 The latest from Librairie Métamorphoses.

Librairie Métamorphoses has released a catalogue of Livres Précieux ou Curieux, Autographes, Musique & Photographies (valuable and unusual books, autographs, music and photographs). Métamorphoses is a Parisian bookseller, and the material, as well as the catalogue, is in French. You will need to understand the language, and better than I, to fully appreciate this catalogue. Many of the works come from French surrealists, and surrealist writing is hard to understand in a language you can read, let alone one you cannot. I beg your indulgence for shortcomings of a review of a catalogue where my understanding is limited to a few words. I will not attempt to describe the personal letters and inscriptions, of which there are many, as they require greater translation skills. Suffice it to say there are handwritten notes from many important French writers of the past few centuries. For examples of what is in the catalogue, I will stick with items less demanding of translations.

I will start with an item needing the least of such skills - a photograph. The photograph is of Guillaume Apollinaire. He is seen lying in a hospital bed, his head bandaged. For those fascinated by surrealism, you can't ask for much more than this in terms of photography. It was Apollinaire who created the term "surrealism" to describe the then new genre of works beyond the realm of the real. He used the term to describe others' works, but Apollinaire was already an established poet as well as a correspondent when he first used that term in 1917. Apollinaire served during the First World War, which explains this hospital photograph. He received a head wound from which he was recuperating when the photograph was taken in May 1916. Unfortunately, he never fully regained his strength and in his weakened state, succumbed to an influenza epidemic in 1918. Item 3. Priced at €10,000 (Euros, or approximately $11,366 in U.S. dollars).

It has been three and one-half centuries since Moliere was writing his plays, but he remains one of France's greatest and most popular writers to this day. He is noted as a playwright, but Moliere was also a poet and an actor, often appearing in the plays he wrote. Many of his plays were ballets and featured music, but its his words for which they are remembered. He wrote comedies, and they regularly poked fun at people of the day, particularly the pompous. He was not always appreciated by his targets, which included the nobility, churchmen, and physicians. The church was able to get some of his performances banned. Fortunately for Moliere, he had an advocate at the top. King Louis XIV enjoyed the humor, especially since Moliere was careful in his treatment of the King. Moliere put on many performances for the King and his entourage. Item 48 is one of Moliere's notable plays, Le Bourgeois Gentilhomme. It is a farce about a representative of the bourgeois class, a social climber attempting to be an aristocrat. In the process, Moliere manages to make fun of both the social-climbing ordinary citizen and the pretentious aristocracy. Offered is a copy of the very rare first edition, first state, from 1671. Price on request.

Paul-Jean Toulet was a twentieth century French poet and novelist. His style is generally considered unusual, though not placed within any particular group. According to Wikipedia anyway, "his novels are almost unreadable today." That is why you want a collectible copy, such as this, rather than a reading copy. Item 65 is his final novel, published in 1920 (the year he died), La Jeune Fille Verte (the green girl). It is described as a story of intrigue in the French province of Bearn, near the Basque region of Spain. This is one of 50 copies printed, appropriately enough, on green paper. €7,500 (US $8,524).

Next we have a large plate of artwork from French comic artist Jean Giraud. It is for the series Le Longue Marche, from 1979. Giraud is noted for the detail in his artwork. The Long March features an unexpected setting for French comics - the American West. It is a place that long fascinated Giraud before taking on the project. It centers around a western character called "Blueberry," a name that American western writers probably wouldn't have selected for their hero. Anyway, he is much tougher than his name suggests, and he goes around the West fixing things that need fixing. Giraud is likely the most popular of all French (and Belgian) comic book artists other than Hergé. Item 28 €30,000 (US $34,090).