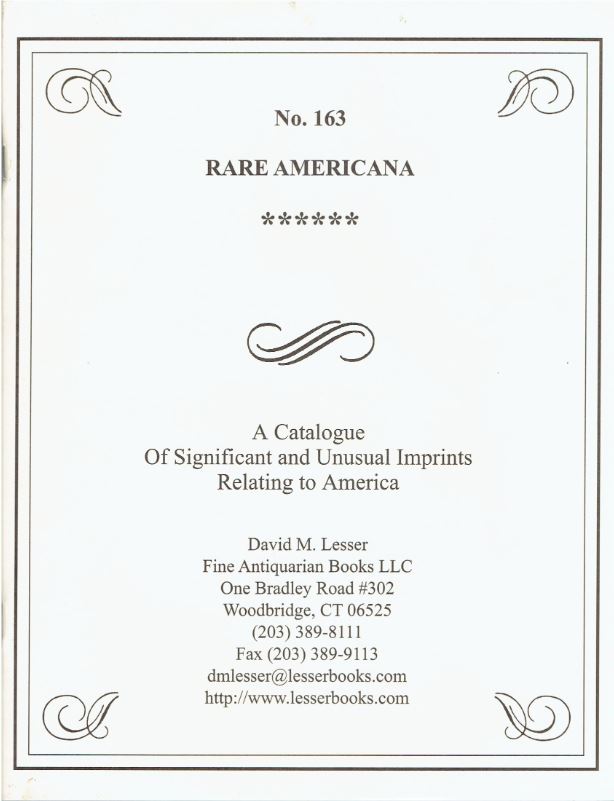 David M. Lesser Fine Antiquarian Books has published their Catalogue 163 of Rare Americana. A Catalogue of Significant and Unusual Imprints Relating to America. Most are from the 18th and 19th century, with many pamphlets, manuscript documents, and more ephemeral items included. We also find several British items, perhaps stretching the term "Americana" a bit, but they are primarily from the 18th century, when America was either a British colony or had just severed the chains, or pertain to the issue that was the bane of America's first century of existence - slavery. Here are some selections from Lesser's 163rd catalogue of Americana.

We begin with a very early printing of the Gettysburg Address, published just a day after it was delivered. You would expect to spend a fortune for this monumental piece of American history, but it costs only a few hundred bucks. Why? Well, it turns out the New York Evening Post missed the history that was made that day. We should not be too harsh on them. Most others missed it at first too. Item 60 is a four-page folded elephant folio printing of the Gettysburg Address from November 20, 1863. Unfortunately, the Post picked the wrong Gettysburg Address to highlight. Lincoln's short speech that afternoon was little noticed by the public until several days later. The main address was given by Edward Everett, a long-winded speech that ran on for almost two hours. Everett was known as one of the greatest orators of his day, and he managed to touch on the entire history of humanity in his speech. Lincoln got right to the point. Item 60 is a condensed version of Edward Everett's Oration of the Previous Day at the Dedication of the Soldiers' National Cemetery at Gettysburg. Priced at $375.

As long as we are on great orators, here is the first published speech by perhaps the greatest of them all, certainly for his era. Daniel Webster was just 18 years old at the time, but he had already gained a reputation as a speaker in college. The result was the citizens of Hanover, New Hampshire, asked him to give a speech celebrating the Fourth of July in 1800. Here is the printing of An Oration, Pronounced at Hanover, New Hampshire, the 4th Day of July, 1800; Being the Twenty-fourth Anniversary of American Independence. By Daniel Webster, Member of the Junior Class, Dartmouth University. It is filled with the flourishes popular in the day. "Hail the day that gave us Freedom, and hail the rising glories of our country!... From the lisping inhabitant of the cradle to the aged warrior whose gray hairs are fast sinking in the western horizon of life, every voice is, this day, tuned to the accents of LIBERTY! WASHINGTON! MY COUNTRY!... That which has happened but once in six thousand years cannot be expected to happen often." Webster stirred audiences with such words for half a century. Item 155. $4,500.

Next we have a Currier & Ives print, though perhaps not a typical one. It is caption titled, Genl. Tom Thumb & Wife, Com. Nutt & Minnie Warren. It is centered by an image of the wedding of Tom and Livinia Thumb. Naturally, those were not their real names, any more then Thumb was a general or Nutt a commodore. Com. Nutt and Minnie Warren, Livinia's sister, served at the wedding of the Thumbs, which was put on by their boss, P. T. Barnum. They all worked for years in his shows, doing quite well financially. This wedding must have been the only time the Thumbs towered over their guests, as Nutt and Warren were both shorter than the principals. Tom, at 2" 11", was the tallest (he later grew a little more). Minnie was but 2' 3". The wedding picture is surrounded by vignettes of images of the four. The caption further tells us they are, "Four wondrously formed & strangely beautiful ladies & gentlemen in miniatures, natures smallest editions of her choicest works. A married couple, a bachelor & belle, all four weighing but 100 pounds. They are all in perfect developement, educated & intelligent, and fitted, both intellectually and physically for all the duties & requirements of life... No exhibition more marvelously beautiful has ever been seen on earth." Gawking was acceptable in the day, and Barnum was a master of hyperbole. Item 36. $950.

Next we have four more images suitable for gawking. Item 39 consists of four carte-de-visite engravings of Jefferson Davis being captured by Union forces in 1865. Each of them depict Davis in a woman's dress, a comic but humiliating depiction. It was not entirely fair. Mrs. Davis had given him a few items of clothing to cover himself from the cold, but Davis did not attempt to disguise himself as a woman in his unsuccessful attempt to escape. Nevertheless, rumors portrayed the situation thus, as ridiculing Davis was understandably a popular idea in the North. $600.

Furthering that idea is item 40. It is a songbook, Jeff in Petticoats. A Song for the Times. Words by George Cooper. Music by Henry Tucker, published in 1865. This one ridicules Davis in words and music, rather than pictures. Actually, it does that too, as the cover depicts Davis, wearing his wife's dress, attempting to flee a Union soldier, his gun drawn. $350.

Here is a type of letter you will not find available very often. It is the letter Supreme Court Chief Justice Salmon Chase wrote to one of the court's Associate Justices on his retirement. That Justice was Robert Grier, who served on the court from 1846-1870. Chase's letter is filled with compliments and good wishes, a sign of the collegiality which has existed on the court, even to this day, something sorely lacking these days in the other two branches of government. The reality is that Chase and Grier were on opposite sides of the most critical issue of their time. Chase was an ardent abolitionist who served in Lincoln's cabinet and was appointed by him to be Chief Justice. Grier was part of the majority in the notorious Dred Scott decision, which ruled that no black people, even those free, could be citizens of the United States. They were no more than mere property of whites. Still, Chase is generous, complimentary, and respectful in his letter of January 31, 1870. Grier resigned because of ill health, with Chase writing, "We deeply lament that infirmities incident to advancing age constrain you to retire from the post you have so long and honorably filled." Chase says that the court will still seek his counsel and companionship, and "May you live many years to give us both." He did not, succumbing eight months later. Item 25. $4,500.

Here is a lawsuit that wasn't worth the cost of filing, and that is a good thing. It consists of documents filed in a suit in Mississippi concerning the ownership of slaves. It was brought by Samuel Heard and Theodore Paddleford against Sarah Ann Heard, widow of Thomas Heard. The paperwork lists 14 of Thomas Heard's slaves whose ownership was contested, all having only a first name, including one with "no name known" by the plaintiffs. Seven were the children of one of the named slaves, "Cheney, a black woman, aged about 38 years." What makes this suit essentially a wasted effort was its timing. It was filed in 1863, the year Lincoln issued the Emancipation Proclamation. They would all soon be free, their once great value as slaves disappearing overnight. Item 32. $850.