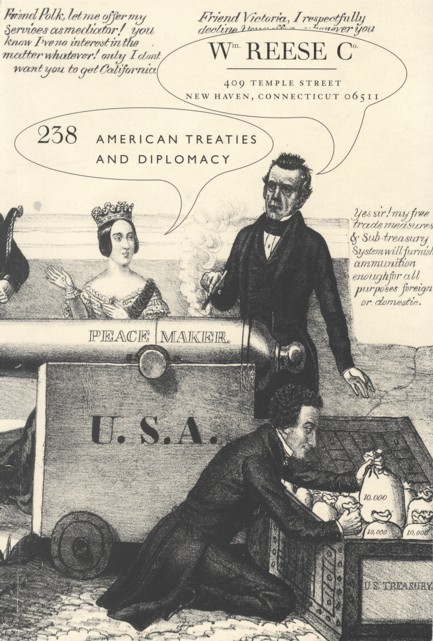 The latest William Reese Company catalogue (238) is a collection of "American Treaties and Diplomacy." The focus is on treaties involving the American continent made over a period of almost 500 years, plus other diplomatic material associated with them. While much involves the nation on the North American continent that would declare its independence in 1776, there are many treaties involving South and Central American nations, and other European treaties which affected the Americas.

While the formation and expansion of the United States is only part of what is dealt with by these treaties, we will limit ourselves to those items. Otherwise, there is far too much to cover. We will mention some of the items in this catalogue which show the development of the British colonies in North America, and after the Revolution, the expansion of the new nation formed from them.

The Twelve Years' Truce signed in 1609 between Holland and Spain was significant to North America because it was the first time Spain acknowledged the right of a non-Iberian nation to sail to the Americas, and opened the door to such nations' having colonies. Up to that point, the new world was dominated by Spain, except for Brazil, ceded to Portugal. Item 2 is a copy of this treaty, Tractaet Van 'T Bestant... Priced at $2,250. That would be followed by the Treaty of Madrid, which allowed the British free trade in North America, and to establish colonies in uninhabited areas (as had already begun). Item 3 is the first Lisbon edition of this 1630 treaty, printed in 1633, Capitulacoes de Paz Feita... $3,250.

Item 9 is a copy of the Treaty of Westminster, Articuli Pacis & Amicitiae... In this 1674 treaty, the weakened Dutch ceded New York City to the British for the final time. It would allow England to take complete control of the Mid-Atlantic region. The seeds were now sown for the creation of a series of colonies with the same language and background that, a century later, would be able to unite to form a new country. $2,250.

The main competition in North America for the next century would be between the British and French. In 1686, an interesting treaty was signed by those two powers, the Treaty of Whitehall. The European powers were constantly fighting among themselves, so to prevent these rivalries from spilling over to America, they agreed that their European wars would not be carried on in America. Whatever battles they might be engaged in at home, business was to carry on as usual in America. It may have helped, but by the middle of the next century, these two European powers would be back at each other's throats on the American continent. Item 13, Treaty of Peace, Good Correspondence & Neutrality in America.... $2,750.