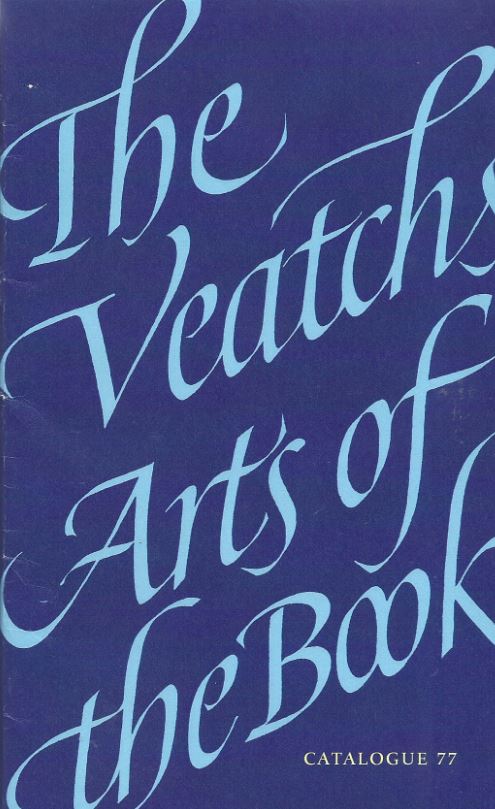 The Veatchs Arts of the Book has issued their Catalogue 77. The Northampton, Massachusetts, bookseller features works in the book arts, books that are as much works of art as text and information. Within that field, anything goes. They note, “Catalogue 77 ranges from books monumental (both in size and in typographical distinction) to single leaves of interest.” Here are a few samples of works that we found.

We will begin with a work the Veatchs describe as a “landmark of American printing.” It is The Book of Common Prayer and Administration of the Sacraments and Other Rites and Ceremonies of the Church According to the Use of the Protestant Episcopal Church in the United States of America, published as a result of the General Convention of the Episcopal Church of 1892 in 1893. It was a production of Theodore De Vinne and his exceptional private De Vinne Press. The Convention had undertaken a major revision of its Book of Common Prayer in 1892, it having first been adapted for America from the Anglican model in 1789. Five hundred large paper copies (of which this is one) on American handmade paper were produced by the De Vinne Press. At the time, Theodore De Vinne wrote his foreman, “Try to make these books a faultless piece of work. Spare no time or expense... Much of our work is trivial and ephemeral, but this will last.” The “spare no expense” instruction may have reflected the fact that one of the greatest supporters of the Convention was J. Pierpont Morgan. The book was printed in black and red, with an exceptional binding. Item 13. Priced at $4,500.

Speaking of exceptional bindings, here's one you won't see everyday. Item 34 is Garden Relicts, by Bert and Molly Eastman, published by the Incline Press in 2006. The Eastmans are a pair of English gardeners who had been tilling the soil for almost 50 years at the time this book was published. The book contains 21 pages illustrated with etchings of various relics dug from their kitchen garden over the years – glass bottles, fossils, metal objects, etc. This copy (unlike most) has a special binding. It contains five colorful bits of broken crockery, and five fragments of old leather bindings. The green leather was “rescued from a rubbish skip.” This is number V of X copies in similar but unique bindings. $450.

Here is another book notable for its binding: Classical Biography: Exhibiting alphabetically the Proper Names with a Short Account of the Several Deities, Heroes, and other persons mentioned in the Ancient Classical Authors. This is an 1802 second edition of a book by Alexander Adam. Most notable is the unsigned red morocco rich in gilt binding. On the cover in gilt it announces the book was a “Reward of Merit at Mr. Turner's Academy, Pottergate Street, Norwich 1832.” Charles Turner was a teacher who opened his own academy sometime during the second decade of the 19th century. The book contains the bookplate of Edward Fiske Browne. While we cannot be certain that he was the recipient of the reward, it seems likely. Edward Fiske Browne of Norwich was born in 1820 and sometime after 1835 became a survey engineer and superintendent for the Eastern Counties Railway. He died at the young age of 30, with a contemporary account attributing his early death to to a devotion to his work such that it impaired his health. Item 5. $250.