Books from a Fair from Samuel Gedge Ltd. 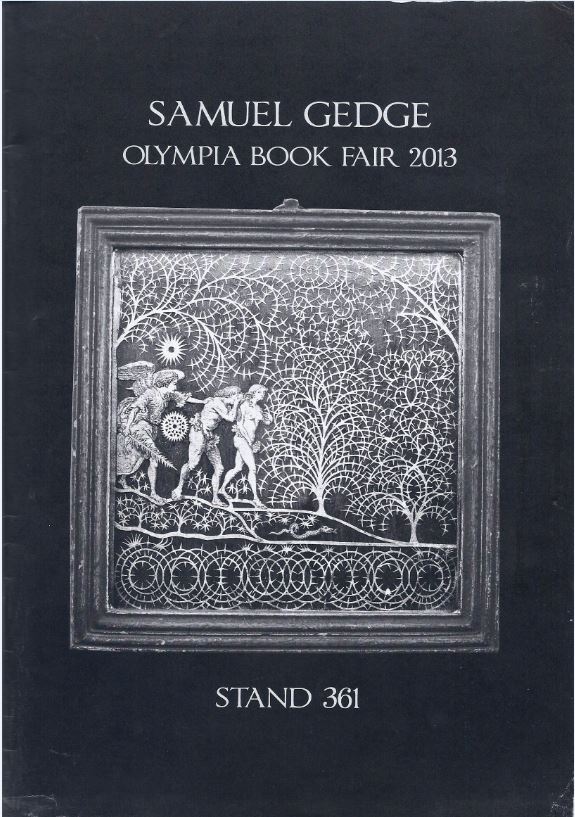 A catalogue for a fair.

Samuel Gedge Ltd. Rare Books recently issued A List of Books, Manuscripts and Ephemera for the London International Antiquarian Book Fair. The annual Olympia Fair concluded about two weeks ago, but these books are as good as ever. Samuel Gedge offers much in the way of British works, though there are numerous items from the Continent as well. These are early works, ranging from the 16th century to the early 19th. There is a mix of types, including books, letters, pamphlets and various ephemeral pieces. Here are just a few examples.

We start with Annotations upon the Book of Psalms, by Henry Ainsworth. Offered is a second edition from 1617. Ainsworth was a “teacher” in the Ancient Separatist Church in Amsterdam, composed of English exiles who rejected the authority of the Church of England. It was from this group that the Pilgrims who came to America in 1621 arose. Indeed, they carried a copy of this second edition of Ainsworth's book with them on the Mayflower. Item 140. Priced at £3,600 (approximately $5,600 in U.S. currency).


Item 163 is a letter of remarque and reprisal, issued to Captain Francis May of the ship Unity on May 23, 1806. These letters were issued to enable ships to act as privateers, in effect legalized pirates, on behalf of their nation. The Unity was herein permitted “to set forth in a warlike manner...and therewith by force of arms to apprehend seize and take the ships vessels and goods belonging to the King of Prussia...” Earlier in the year, Napoleon had forced a treaty on the Prussian King that closed North Sea ports to the British and gave Hanover, seized from England, to Prussia. It effectively drove a wedge between Britain and Prussia, and the two would go to war a month later. £1,250 (US $1,944).


Item 174 is a piece from one of those bizarre pamphlet wars of an earlier time: A new-years-gift for Doctor Witty; or the dissector anatomized: which is a reply to the discourse intituled. An answer to all that Doctor Tonstall has writ, or shall hereafter write, against Scarbrough spaw. The author of this 1672 piece is, naturally enough, Dr. George Tonstall. In it, he attacks the “petrifying property” of the mineral waters at Scarborough Spaw. Tonstall had once been a big fan, but no longer. He now knew better. However, this is not an attack on the myth that these mineral spas actually did people any good. Rather, Tonstall was pushing a rival spring at Knaresborough. He cites one William Beckwith, who contracted “fits of stone” from Scarborough water, but was cured by the waters at Knaresborough. £750 (US $1,166).


Next is The Humble Petition of the Protestants of France, made to French King Louis XIV in 1681. The French Protestants, also known as the Huguenots, were not being treated well in the predominantly Catholic nation. Almost a century earlier, King Henry IV had issued the Edict of Nantes, which provided many rights to the Protestant minority, including the right to work in any field or for the state. However, while granting these rights on paper, the rules were not always observed in practice. By 1681, French Protestants were being evicted from public office, prevented from working in some trades, and were limited to one schoolmaster per town regardless of that town's size. This petition represented an attempt to secure the protections promised in law. King Louis, who was not too keen on any deviations from the state line among his people, responded four years later by revoking his grandfather's Edict of Nantes. The result was a mass exodus of Huguenots. Item 81. £650 (US $1,011).