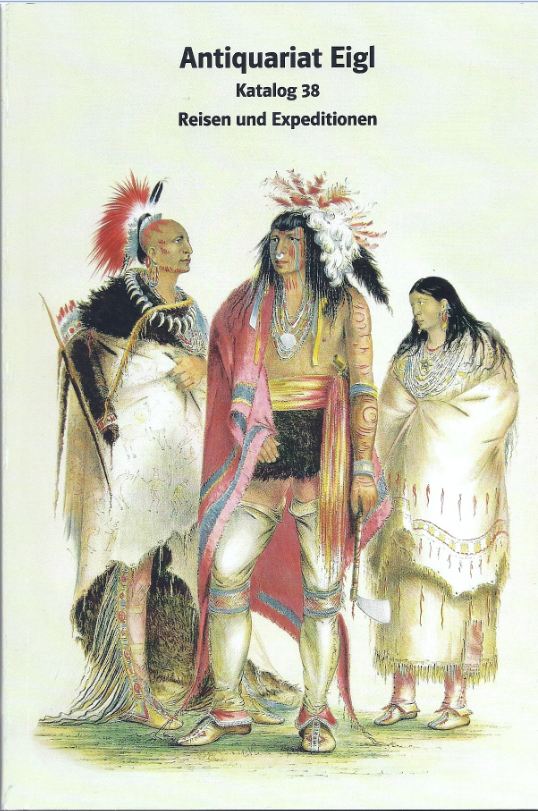 Antiquariat Eigl has issued a catalogue of Reisen und Expeditionen (Travel and Exploration). Not surprisingly, a catalogue with such a title would be written primarily in German. However, while this is also true of many of the books, there are numerous titles to be found in other languages here, notably English and French. It may be a bit tricky to maneuver through the catalogue if you don't speak German, but it can be done. There are enough props to help you through, particularly if you are interested in the titles in other languages.

Many of the German language books are actually German editions of accounts by travelers from other nations, their works translated for a German audience. There weren't a lot of German explorers in the early days, though there were some, and they will be found here with travelers from other European lands. Now, here are some of the travel books offered in this catalogue.


There is no better place to start a discussion of the great voyages than with those of Captain James Cook. Cook led three voyages in the 1770s from England to the Pacific, and made numerous discoveries pertaining to Australia, western North America, the Pacific islands, plus disproving the long-held belief that there must be a massive continent (far bigger than Antarctica) at the southern end of the globe. Cook set off on his final voyage in 1776, and he never returned. He was killed by natives in Hawaii. His final report had to be finished by his successor, Captain King. It took several years to complete. No one who participated in the journeys was supposed to publish an account prior to the official one, but someone always jumped the gun on Cook. On that final trip, two crewmen went ahead of schedule by almost three years. It is not clear who was first. One was the German carpenter Heinrich Zimmermann, whose account was first published in German. The other was Lieutenant John Rickman, whose account was first published in English. Item 25 is something in between these, the first (and only) German edition of Rickman's account, published in 1781: Tagebuch einer Entdeckungsreise nach der Südsee in den Jahren 1776 bis 1780... (Diary of an expedition to the South Seas in the years 1776 to 1780). Rickman published his book anonymously, though he was soon found out. His account is considered particularly important as it differs in some aspects to the official version, and he provides what Cook himself never could - an account of Cook's death. Priced at €2,700 (euros, or approximately $3,605 in U.S. currency).


By the 1830s, it had become clear that North American Indian life, as it had existed for countless centuries, was coming to an end. It had been changed some by the earlier arrival of the Spanish, notably the introduction of the horse, but for the most part the Plains Indians lived in isolation from Europeans. As settlers rapidly moved west in the 19th century, that was quickly coming to an end. A few Americans sought to preserve a glimpse at that life for future generations before it completely disappeared. One notable preservationist was George Catlin. Catlin wrote, “The history and customs of such a people, preserved by pictorial illustrations, are themes worthy of the lifetime of one man, and nothing short of the loss of my life shall prevent me from visiting their country and becoming their historian.” Of course, Catlin had some financial motives here too, as he traveled the world displaying his drawings, sort of like an early version of Buffalo Bill, as well as publishing them in book form. Nonetheless, he should be credited with his noble motivations too. Item 12 is his North American Indian Portfolio, published in 1844. Offered is a copy of the rare first edition, first issue, one of the copies hand-colored under his personal supervision (some copies were issued uncolored). €115,000 (US $153,541).