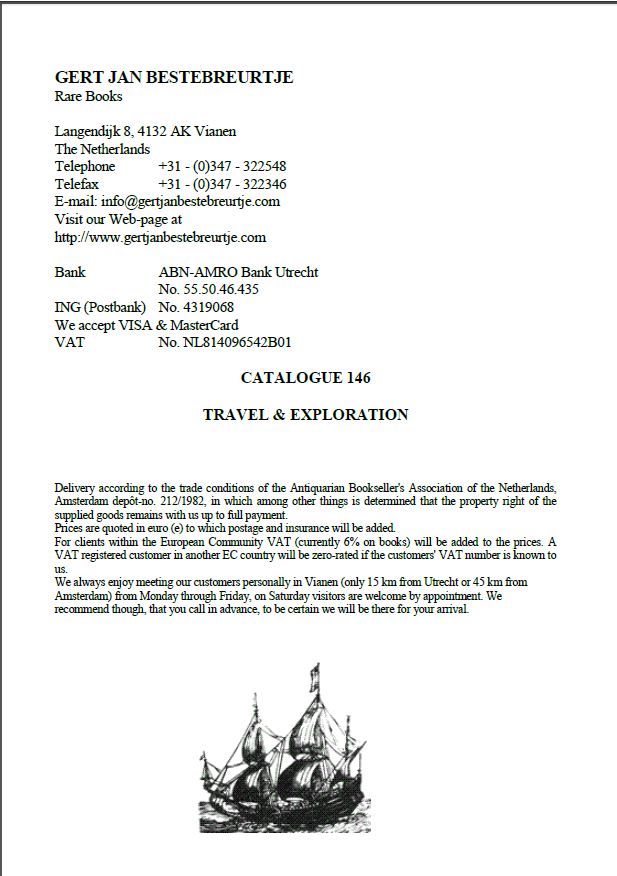 Gert Jan Bestebreurtje Rare Books has issued their latest selection, Catalogue 146. Travel & Exploration. It is filled with works of historical significance as well as more obscure titles. The travels were early, ranging from the 16th through the 19th century. They mostly started in Europe, but reached all corners of the globe, or at least its various rounded edges. What they discovered fills the pages of these books. Here, now, are a few of them.

We will start with one of the earliest, the Cosmographia of Petrus Apianus. First published in 1524, this is a 1545 Antwerp edition, augmented by the work of mathematician Gemma Frisius. The work is filled with information on geography, astronomy, navigation and more. It would be printed throughout the 16th century, eventually being available in 14 languages. What it is best remembered for, however, is its world map. Once believed to be the first map to use the name “America” to describe the New World, it may still be the second after Waldseemuller. Item 3. Priced at €13,500 (euros, or about $17,468).


Moving ahead a couple of centuries, we have a classic African adventure: Travels to Discover the Source of the Nile... by James Bruce. Bruce traveled to Africa in 1768 in attempt to find the headwaters of a river known for millennia in the West, but whose source was always a mystery. He attacked the expected source through Ethiopia, reaching what he thought was his goal in 1770. Alas, what Bruce had discovered was the source of the Blue Nile, considered the major tributary, but not the main branch, that being the White Nile. Item 14 is a first edition, published in 1790. Item 14. €4,250 (US $5,491).


Item 6 is a play, and a moral lesson, from long ago: Oronooko: a Tragedy. This is a second edition (1699) of Thomas Southerne's play, first published in 1696. It is the story of an African prince (Oronooko), captured into slavery and sent to Suriname. Without getting deeply into the details, he falls in love with the daughter of a general, they are separated, she is sold into slavery, they get back together, he leads a slave revolt, Oronooko is forced to kill her to spare the woman from what would be done to her, and then he is killed. This story actually predates Southerne's play. It was originally written by Aphra Behn and published in 1688, the year before she died. She claims to have visited Suriname, and most scholars believe she did, though the point is in dispute. Southerne effusively gives Behn credit in his forward. However, the story became better known in Southerne's version, and the playwright's tale displays the horrors of slavery more boldly than did Behn's. The result was that it became a favorite of abolitionists in the late 18th century. €2,250 (US $2,908).


James Edward Alexander compiled a long career in the British military and as an explorer. He wrote numerous books about his travels, including this one which took him to America: Transatlantic Sketches, Comprising Visits to the Most Interesting Scenes in North and South America, and the West Indies. With Notes on Negro Slavery and Canadian Emigration. He visited the wilds of South America, numerous islands of the Caribbean, and on to North America, where he traveled up the Mississippi, Ohio and St. Lawrence Rivers, and then turned down the Hudson to New York and major east coast cities. The journey consisted of 16,000 miles worth of adventures. Unlike many Englishmen of the day (1830s), Alexander defends the practice of slavery. While stating that it cannot be defended in the abstract, he says that since past governments encouraged it, and West Indian slavery is necessary for British plantations in the West Indies, it would be ruinous to have immediate emancipation. Besides which, he adds, immediate emancipation would be terrible for the slaves themselves, “as must be evident to every one who knows what negroes are.” He believes they would turn to idleness and crime and the like, unlike their more worthy British overseers. Item 2. Published in 1833. €975 (US $1,261).