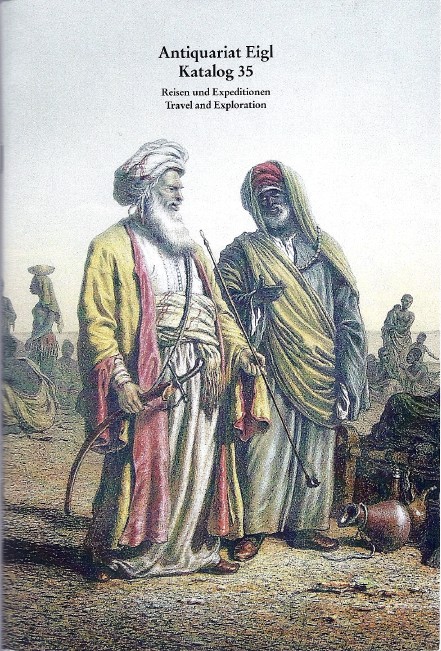 Travel and exploration from Antiquariat Eigl.

Antiquariat Eigl has issued their Katalog 35, Reisen und Expeditionen / Travel and Exploration. Two things you might gather from this title is that the catalogue contains books about travel and exploration, and that it is mostly in the German language. Most descriptions will require a knowledge of German to understand, most but not all. There are some in English, as are some of the books themselves. Many others are German translations of books that first appeared in English, French and other languages. As the era of exploration occurred before there was a unified Germany, there were not a great number of German explorers. Nevertheless, residents of the principalities that would become Germany were as interested as others in learning what was in that great expanse of lands unknown to Europeans a few centuries ago. Here, now, are a few works of travels and explorations presented by Antiquariat Eigl.

Offered are two papers from the great British explorer Mathew Flinders. Flinders is not well known in America, but that's because he went in the opposite direction. Everyone is familiar with Flinders in Australia. He circumnavigated the continent just after the turn of the 19th century and brought back a wealth of information about the barely discovered land. He is probably more responsible than anyone for giving the continent the name "Australia." Previously, it was known as "New Holland," not a name the British would have cared much for. However, on the way back to England in 1803, Flinders ran into technical difficulties. He had to replace his damaged ship, but his new one had problems too. He pulled into the French controlled island of Mauritius for repairs. Unfortunately, the French and British were then at war, resulting in Flinders being effectively held under house arrest there until 1810, when he was finally freed. He used some of that great amount of spare time to write these papers.

Item 26 is Concerning the differences in the magnetic Needle, on Board the Navigator… published in 1805. This paper came from a letter Flinders sent to Sir Joseph Banks in which he explained how to correct for errors in compass readings caused by iron components of wooden ships. Priced at €4,300 (euros, or about $5,963 in U.S. Currency).

Item 27 is Observations upon the Marine Barometer, made during the Examination of the Coasts of New Holland and New South Wales… This 1806 paper, also from a letter to Banks, showed how changes in barometric pressure could predict changes in wind direction to come. This was a major aid to navigators in the era of sailing ships. €4,200 (US $5,824).

Speaking of Australia, that name was really a corruption of "Terra Australis." Terra Australis was a massive southern continent once believed to exist, partly where Australia is today, but also circling the entire southern hemisphere. One of the believers was Pedro Fernandez de Quiros, whom Eigl describes as "the last of the great Spanish discoverers." He led a mission to the South Pacific in 1605, where he discovered the largest of the New Hebrides Islands. He thought he had discovered the tip of the iceberg, so to speak, the tip of Terra Australis. Quiros returned to Spain to drum up support for another mission to confirm his findings. Unfortunately, he was not well respected in his homeland, and his numerous attempts, including the book here offered, fell on deaf ears, and he never returned to the region. His book is entitled Terra Australis Incognita:  or, A New Southern Discovery, containing a Fifth Part of the World; Lately Found out by Ferdinand de Quir. It was actually not quite so "lately" by this time, as while it is just the second English edition, it was published more than a century after the first. Like the first, it is quite rare. Item 65, published in 1723. €23,000 (US $31,894).