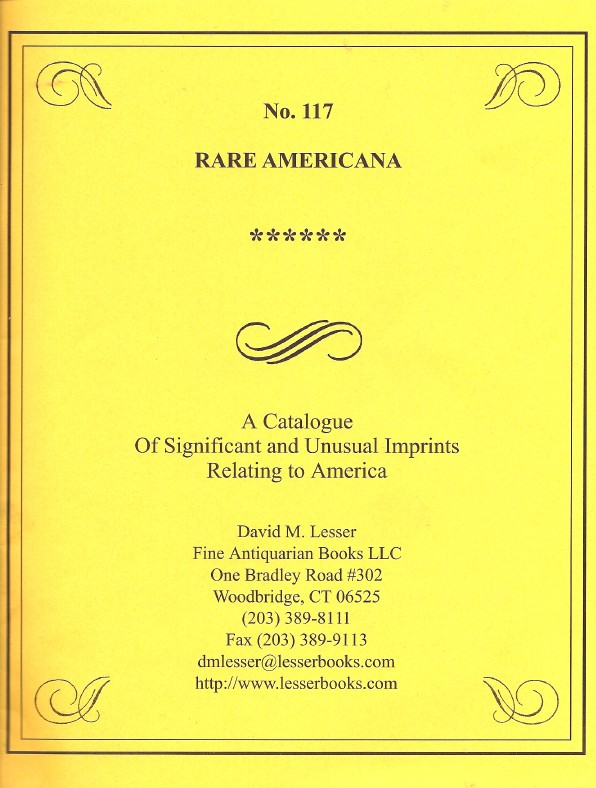 David M. Lesser Fine Antiquarian Books has issued their 117th catalogue of Rare Americana. Lesser's catalogues specialize in pamphlets and shorter form pieces pertaining to America, mostly from the 18th and 19th century. Much of the material relates to the difficult time leading up to the Civil War, when the issue of slavery began to divide the nation north vs. south, ultimately leading to the break only war could resolve. However, there is also material from the Revolutionary period and the years before the regional differences became irreconcilable. Here are some of the publications in this latest Lesser catalogue.

Item 11 is the Trial of John Y. Beall, as a Spy and Guerrillero, by Military Commission, published in 1864. Beall was a well-off, former University of Virginia student who took up the Confederate cause. However, rather than joining the army, he decided to pursue his own missions behind enemy lines. His plans involved disruption of Union commerce, spying, and freeing of Confederate prisoners. He operated under the semi-authority of the Confederacy, which allowed his actions but did not provide support. As such, he might be considered a Confederate privateer, but to the Union, he was simply a pirate. He captured a couple of boats on the Great Lakes, using Canada as a haven for escape. Eventually, he came back across the border and attempted to highjack a train near Buffalo to free some Confederate officers. Instead, he was captured near the suspension bridge over the Niagara River. This trial ensued. Beall argued that he was acting as a Confederate naval officer, and therefore should be treated as a prisoner of war. The military commission did not buy in, finding him a spy and criminal and sentenced him to death. Beall had many supporters for his position as 92 members of Congress wrote President Lincoln asking that he be pardoned. Lincoln, a sympathetic man who signed many a pardon for ordinary soldiers who faced harsh punishments, was not so inclined for a spy against the nation. He declined and Beall was hanged just a few weeks before Lee surrendered. Priced at $450.

Most Americans were preparing for the seeming inevitability of war in 1860. Theophilus Roessle had other issues on his mind, such as how to cultivate celery. Roessle was a German immigrant who came to America in 1825 with no money. He settled in Albany, New York. After working a variety of jobs, he gathered enough money to rent some land and began farming. In time, he became a major supplier of vegetables to various markets, hotels and such. His specialty was celery. Who knew you could become rich from celery? Along the way, one of his hotel customers was unable to pay his celery bill, so Roessle took an interest in the hotel. In time, he gained complete control, beginning a career as a major hotelier. Still, the cultivation and preservation of celery remained a challenge, which took Roessle years to perfect. Finally, he unveiled his secrets in this 1860 book:  Roessle's Gardiner's Hand-Books. No. 1. How to Cultivate and Preserve Celery. Though this is styled number one in a series, Roessle never got around to publishing any further titles. Item 117. $250.