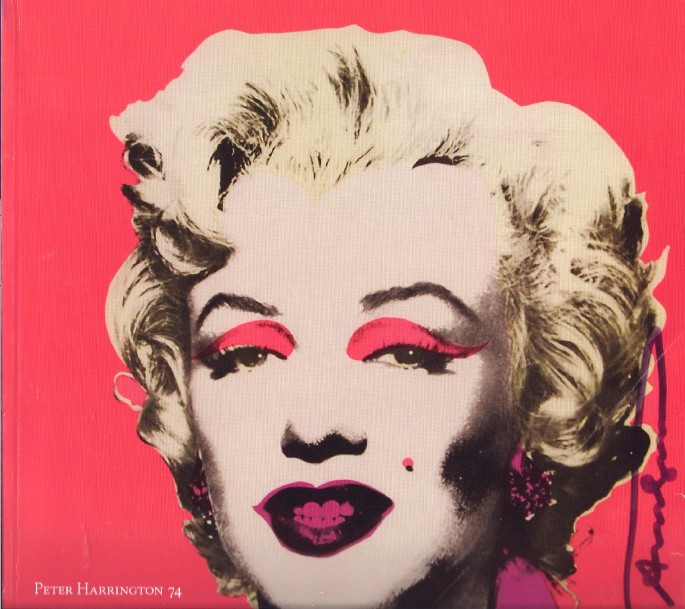 We have received Catalogue 74 from Peter Harrington, a collection divided into three sections. There are 12 featured items, followed by the main catalogue, and then a gift selection. This review may be a bit late for the gift season, but after the holidays it is permissible to buy them for yourself. The material in each section is widely varied, the difference being the prices are in descending order. Harrington evidently expects you will not spend quite as much on a gift as you will for yourself. They understand human nature. Whether buying for yourself or others, you are bound to find lots of books and related items of great interest among the 400+ offered. By the way, that's a portrait or something of Marilyn Monroe by Andy Warhol on the cover. Give Andy credit for finding a way to make even Marilyn look creepy. Only an artist of great skill could pull that off. Here are some other items offered in this catalogue.

Item 4 is a copy of the classic of American youth, Mark Twain's The Adventures of Tom Sawyer. This is a first printing of the first American edition from 1876. The book was first published in London as Twain wanted to secure a British copyright, but the story was intended primarily for American boys. As we know, its appeal extends way beyond American boys. Along with Sawyer, the book introduced his "comrade" Huckleberry Finn, featured player in a book to come out a decade later. This original edition is on wove paper with the gilt-lettered blue cloth cover. Priced at £ 67,500 (British pounds, or approximately $106,517 in U.S. Dollars).

From a boy who made the most of his youth, we go to one who wasted his. Life could have been different for Ebenezer Scrooge if he thought about anything but money, but he didn't, and you know the rest of the story. Item 6 is a first edition, first issue of Charles Dickens' classic A Christmas Carol, published in 1843. This story still comes around every Christmas, to teach us a lesson we soon forget. £ 12,500 (US $19,725).

Item 139 is a catalogue of Unfinished Paintings and Objects by Yoko Ono, an exhibit that was put on at the Indica Gallery in London in 1966. This exhibition would probably have been forgotten had not gallery owner John Dunbar invited a friend, John Lennon, to a preview. Lennon was intrigued by Ms. Ono's work and as they say, the rest is history. £ 875 (US $1,380).

Item 17 is a first U.S. edition, and the first in English of Satchmo. My Life in New Orleans. This could only be a biography of Louis Armstrong, leading to the question, if Armstrong's autobiography was not first published in English, in which language did it first appear? His gravelly voice may not always have been clear, but that was definitely English he was speaking. Armstrong's book was originally published in French in 1952, two years before this English language edition. I'm not sure whether Satchmo had to translate his book back into English or if he kept his original manuscript. Armstrong has inscribed this copy to Jeff Atterton, a British jazz journalist. £ 2,500 (US $3,945).