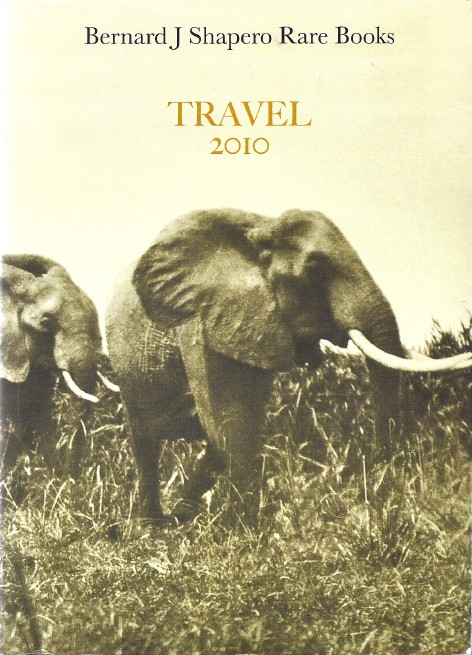 Bernard J. Shapero Rare Books has published a catalogue of Travel 2010. The date is for the catalogue, not the travels, as these are primarily books from a time when travel was accomplished without the benefit of engines. Sails, animals, and feet were the primary modes of transportation. The catalogue is divided into four sections: Africa, America/Asia/Pacific, Mediterranean to the Himalayas, and Europe. They even manage to sneak some polar explorations in here, though they don't entirely fit one of those categories. These are overwhelmingly European-centric in the sense that most were journeys begun in Europe and represented expansion of knowledge of the world from the point of view of the natives of that continent. Here are a few of these 363 books of travels around the world.

This is one of those Arctic adventures: Farthest North. The Norwegian Polar Expedition, 1893-1896, by Fridtjof Nansen (1897 first edition in English). Nansen was hopeful of being the first to reach the North Pole. He concluded that the Arctic sea ice flowed on the ocean, so his aim was to get his ship frozen in the ice and ride it over the Pole. He had his ship, the Fram, especially built to withstand the extreme pressure of the packed ice. Instead of being monumentally strong, it was designed to slide up with the pressure, almost riding on top of the ice. While Nansen's theory was basically correct, once frozen in and moving, he realized the ice was not going to take him over the Pole. So, he and Hjalmar Johansen set out on foot. They were not able to reach the North Pole, though they did get farther north than anyone before. Nansen and Johansen were not able to find their way back to the ship, but later did find a British expedition, and both they and the Fram eventually made it home. The Fram was later used to carry Roald Amundsen's expedition to Antarctica, the first to reach the South Pole. Item 205. Priced at £135 (British pounds, or roughly $215 in U.S. dollars).

James Bruce made an early attempt to find the elusive source of the Nile River, which he described in Travels to discover the source of the Nile, in the years 1768...1773, published in 1790. Bruce had to learn the language and customs of the locals to make his journey in Abyssinia, where he believed the source would be found. Bruce did make it to the headwaters of the Blue Nile, but most consider the White Nile to be the main river, so credit for finding the true source would have to wait almost another century. Item 10. £7,750 (US $12,344).

The source would finally be discovered on an expedition led by Richard Burton, though Burton did not believe it. Item 15 is an 1860 first edition of Burton's The lakes regions of Central Africa. A picture of exploration. Both Burton and John Speke became very ill on this journey. Though temporarily blinded, Speke was able to travel farther, and discovered Lake Victoria. He believed it to be the source of the Nile; Burton did not. Burton attacks Speke's conclusion in this book, though Speke proved to be right. £1,500 (US $2,390).

Speke would confirm his beliefs in a second expedition, without Burton, in 1862. This he recounted in his 1864 book, What led to the discovery of the source of the Nile. Even at that point Burton was not convinced, and the two were scheduled to debate when Speke died of a self-inflicted gunshot wound that morning. Whether it was accidental or intentional is uncertain. Item 106. £3,250 (US $5,178).