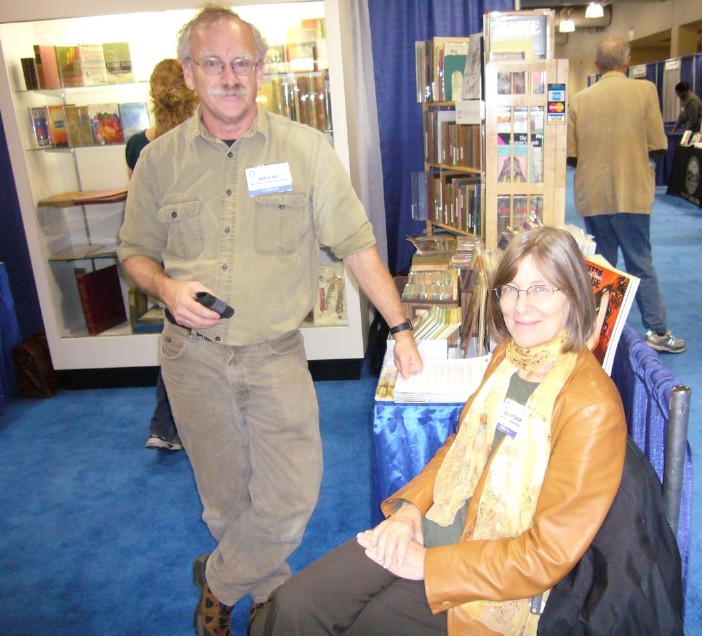 
Antiquarian Books
In the years that followed he refocused his operations and evolved into his present set up. He joined the ABAA a few years ago, one of the leading organizations for antiquarian booksellers, because he wanted to do their fairs. "We do the ones in San Francisco and Boston: San Francisco because it's close and not so expensive, and Boston because we love going to Boston. The antiquarian shows are a lot of work and attendance is low compared to comic shows."

Comic Cons - San Diego and Other Shows
It's those large scale shows for comic fans that have played a big role in the growth of his business. The comic conventions, especially the one in San Diego later this month is a huge event. (www.comic-con.org). "I'd say attendance is about 125,000 to be conservative. It's a guaranteed sell out. If you don't have a ticket already you can't even get a pass." This year Plant will have three booths in San Diego, the smallest number in a decade. "At this show I wear both hats. I'll have one antiquarian booth and two for new books. I go to wave the flag, give away catalogs, make money and find new stuff."

Plant observes that the current generation at San Diego is younger than those who attended in prior years. They are "less into the art and comics and much more media oriented. They come to see the stars of TV shows like Lost, Heroes and films like Dark Knight."

"They're also a lot more internet savvy than the older buyers. They will use our site and catalogs to shop. Then they look for a lower priced offering on Amazon. The younger crowd wants it cheap and they can always find it cheaper ... they don't have any loyalty, it's strictly about price."

Plant divides comic fans and buyers into roughly two groups: There are those who collect the mainly American, mainly older comics, the pulps, the graphic novels and the related original artwork. "Then," he says, "there is the Japanese stuff, the anime for film and the manga for print - this audience is into regular comics too, but as a group they tend to be younger and larger in number than the other category."

In his blog Plant has quite a few other comments comic-cons. He also likes to attend two of the smaller West Coast regional comic fairs, Wondercon in San Francisco which gets annual attendance of 25,000 to 30,000 (www.comic-con.org/wc) and Emerald City in Seattle, which he calls "a good show with about 14,000 coming through the door" each year. (www.emeraldcitycomicon.com/)

While the shows are still good places to buy and sell low and medium priced material, the auctions and specialty dealers are the marketplace for the very high end. "I'm not usually a big auction fan," he says, "but I've gotten hooked on Heritage. They do a good job on-line with weekly comic auctions of about 300 to 500 items. He also likes Heritage for selling: "I've sold original art and other high grade things with them and I've been happy with results." As for buying comics on eBay, "It's a pig in a poke. You've got to know who you're buying from." Plant doesn't have much to say about the recent gigantic prices realized at auction: "Rare comics are another place to put money - they're generally up (in value) - because the really good examples are scarce."

To hear him tell it big 4-0 is no big deal. The "fun parts," he says, "are still the hands on dealing with books, meeting customers, fairs and shows and discovering new things."