iPad: Avenue to the Attention Age? 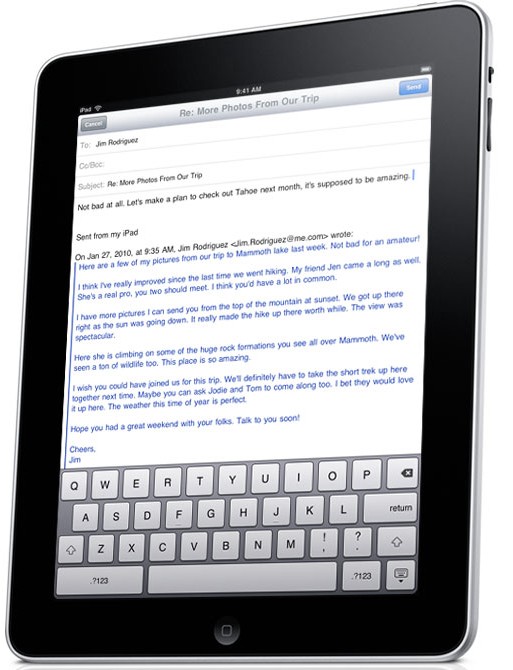 The iPad, with an example of the on-screen keyboard displayed

In my previous article, I started to talk about the Attention Age. People are participating with the Internet, rather than just watching and taking. It is also going mobile. Laptops have been around for a long time now. Smartphones have already taken the corporate world and with the help of the iPhone, are moving to consumers. And now, Apple has announced a product that continues the mobile trend. I'm talking about the iPad.

I decided to write about the iPad specifically because I believe it has a clear place for the demographic that dominates the Americana Exchange. I'm 23, so I'm referring to the generation or two preceding mine. The Attention Age is taking off around the world, but until now there's been a semi-steep learning curve for those just getting a feel for it. I think the iPad could bring in the stragglers behind and on the fringes of the movement.

While the iPad hasn't been released, and thus I haven't put my hands on one, it does run the iPhone operating system which I've had much experience with being a first and second-generation iPhone customer.

To catch anyone up who doesn't know, the iPad Apple announced resembles an oversized, more squared-off iPhone or iPod Touch. It is a touch-screen only (no built-in keyboard) tablet computer. It's 9.56" tall by 7.47" wide; with a viewable screen size 9.7" diagonally. It weighs 1.5 lbs. So it's smaller and lighter than the average laptop, and obviously bigger than a phone. It'll fit into a largish purse and obviously briefcases and other bags.

Let's talk about screen size first. An iPhone has a 3.5" diagonal screen. This is also on the larger size for smartphones - my own Blackberry Curve's screen is maybe half that? Compared to the iPad's 9.7", I can tell you which platform either of my parents would prefer. Here's a hint: they both wear glasses for either distance or reading. The iPad also packs the iPhone & iPod Touch's multi-touch (aka multi-finger touch-screen gestures which produce different results) technology so zooming in when needed is a cinch: take two fingers and spread them in opposite directions.