Now Available: The Book All Collectors of L. Frank Baum and Oz Must Have 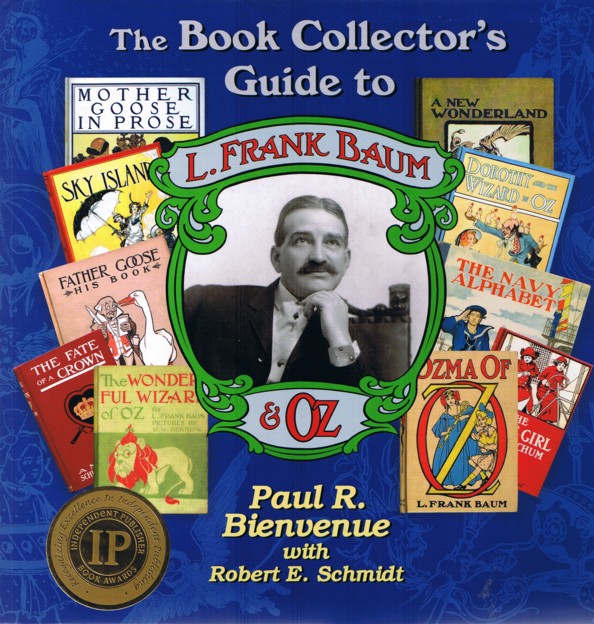 The Collector's Guide to L. Frank Baum and Oz.

A book has been published that is an absolute must for anyone who collects L. Frank Baum, the Oz books, or anything closely related. The title is The Book Collector's Guide to L. Frank Baum and Oz, written by Paul R. Bienvenue with Robert E. Schmidt, and is published by March Hare Books of El Segundo, California. It even contains a foreword from the author's great-grandson, Robert A. Baum, who knew Frank's wife, Maud (L. Frank Baum died 90 years ago, but Maud lived until 1953, and was a particular influence on his pro-feminist views). The book is priced at $75, which, while a bargain for the level of research provided, is irrelevant to a serious Baum collection. This is an incredibly detailed bibliography and you will never purchase another significant Baum book (in English) again without consulting it.

L. Frank Baum was born in 1856, and attempted a number of careers before settling down to be a writer of children's books. He tried raising poultry, worked as a store clerk, and moved to South Dakota to open his own store. However, Baum always had a love for writing and the theater, and his lack of notable success in other endeavors always brought him back. As early as the age of 15, he was publishing an amateur newspaper, The Rose Lawn Journal (named after the family estate near Syracuse, New York), and he would later publish a directory of local stamp dealers, and The Poultry Record during his fowl breeding days. His first true book was The Book of the Hamburgs, about a breed of chicken, published in 1886. Bienvenue describes it as his "scarcest" book and one can understand why. It would not have had the appeal of his Oz books.

In the 1880s, Baum managed some theaters for his wealthy father, and wrote and acted in some plays himself. The most successful was The Maid of Arran, performed in 1882. At the time, he was also writing for some newspapers. He married Maud Gage, daughter of a prominent suffragist, but then returned to another family business more associated with the source of his family's wealth, petroleum. The firm was Baum's Castorine Co., which produced such products as axle grease.

It was a series of family financial setbacks that led Baum to move to South Dakota, where he opened Baum's Bazaar, a general store that failed after a year in business. He next published a newspaper in Aberdeen, South Dakota, which also failed, and then moved to Chicago to pursue various journalistic and mercantile pursuits. He took on a job as a traveling china salesman, a role that meant many nights spent on the road, away from his wife and children. He used this time away from home to write short stories and poems for adults, but at home, he would invent tales for his children. This led him to the fine printing house of Way and Williams, which commissioned him to write his first children's book, Mother Goose in Prose, published in 1897. This was an expensive book, with illustrations obtained from the then young Maxfield Parrish, more suitable for adults then children. It did not sell very well.