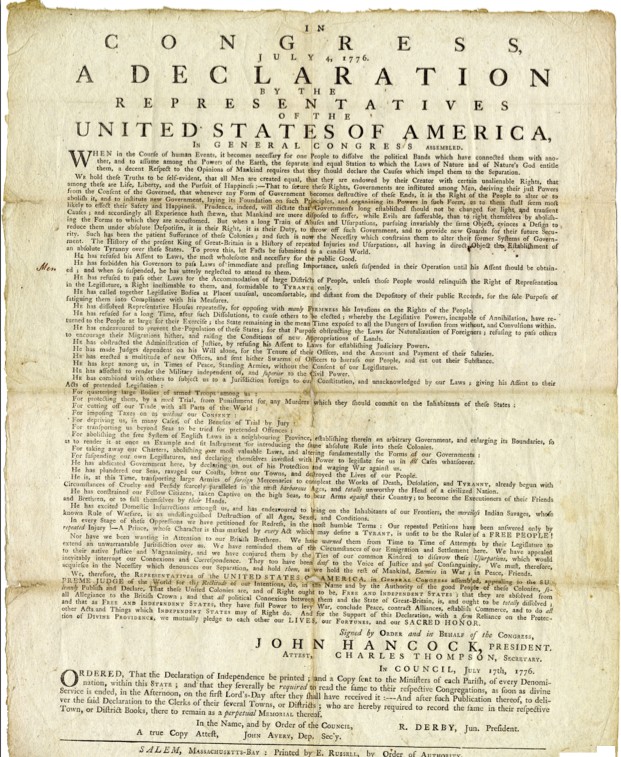 A similar old copy of the Declaration of Independence.

In a major case pitting a collector against a state for ownership of old documents, victory has gone to the collector. Richard L. Adams of Virginia prevailed over the State of Maine in the Virginia Supreme Court for a copy of the Declaration of Independence he purchased for $475,000. It was certainly a major victory for Mr. Adams personally, but collectors owning potentially challengeable old government documents should not yet send out a collective sigh of relief. There could be less to this decision than meets the eye.

Here is a brief history of this long case, over 200 years in the making. In 1776, authorities in the State of Massachusetts authorized a private printer to print 250 copies of a radical document recently approved in Philadelphia - the Declaration of Independence. The order provided that these printings of the Declaration be read from the pulpits of local churches, and then handed over to the Town Clerk to transcribe into that town's official records. Nothing was said about what should happen to these printings after they were transcribed into the record.

The copy in question was read in the pulpits, and turned over to the Town Clerk of Pownalborough, Massachusetts (which is today the town of Wiscasset, Maine). On November 10, 1776, Town Clerk Edmund Bridge copied the Declaration on the town's records as required, and then did something with the original document. What he did with it is not certain. As the court noted, there is no definite sighting again for 219 years, when it was put up for auction in the sale of the estate of Anna Plumstead of Wiscasset. However, it is not all that hard to surmise what happened.

Some writing on the back of the document indicates it stayed with the town for at least a short while, and then the written evidence goes blank. However, Anna Plumstead was the daughter of Town Clerk Solomon Holbrook. Holbrook attained that position in the 1880s, and held it until he died in 1929. In this era, small New England towns did not have much in the way of government offices, so town clerks kept public documents at home. It would certainly be reasonable to believe that this item, and other old town documents found in Plumstead's house, arrived there via her father, either being transferred to her house for storage during Holbrook's life or after he died. Holbrook had at one time owned his daughter's house, though he never lived there.

In 1995, the Declaration was sold at a public auction of Plumstead's estate. It was purchased by Seth Kaller of Kaller Historical Documents for $77,000. In 2001, Kaller sold it to London bookseller Simon Finch for $390,000, who in turn sold it to Adams in 2002 for $475,000. Had the decision gone the other way, Adams could have been out as much as the full $475,000, depending on whether he could have collected any reimbursements from those who preceded him in the chain.

In reaching its decision, the Virginia Supreme Court noted first that possession presumes ownership. In other words, it is up to the party not possessing the item, in this case Maine, to show that it is the true owner, not the other way around. On the other hand, it also noted that public records belong to the government, a point favoring Maine. Then it proceeded to evaluate Maine's three arguments. The first two dealt with public records, and the third with simple conversion, or unlawful taking.

The first "public record" argument relied on the common law position that public records belong to the government. However, the standard common law definition describes a "public record" as one written by a public officer. This Declaration was not written by the Town Clerk, but printed by a private citizen. Therefore, the Court concluded, the only "public record" was the copying of this document by Town Clerk Bridge in the public register in 1776, not this printed original. Score one for collector Adams.

Next, the Court looked at the argument that this constitutes a "public record" under a statutory definition adopted by Maine in 1973. The lower court had ruled against Maine here on the grounds that the state had not produced evidence that this statute was intended to apply the definition retroactively to pre-1973 records. The Supreme Court then rejected Maine's appeal on this issue on a technicality, saying the state did not properly challenge this finding and so it would not reconsider the argument. Score two for Adams.