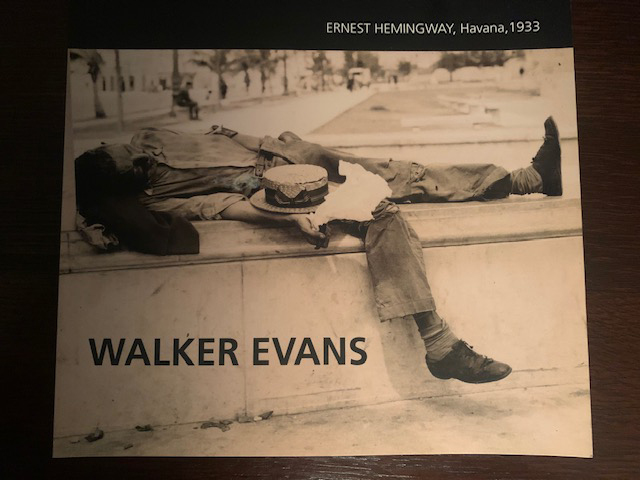 The original 68 page essay and catalogue

Recently I received a very crisp catalogue about Walker Evans and 46 photographs he took and printed in Cuba in 1933.  This catalogue was issued by Michael Brown Rare Books and De Wolfe & Wood.  It was faintly familiar and in fact we had reviewed it in 2017.  I believe one of our many dealer friends recently mailed their copy to us.  The price wasn’t announced [POR] but I know today it was offered at a million dollars.

It was a remarkable collection and this is how they described it:

“The 46 photographs in this collection were taken and printed in Cuba by Walker Evans in 1933 and then given by Evans to Ernest Hemingway to take back to America, as a precautionary measure, on the Anita, Evans and Hemingway, two of America’s foremost proponents of modernism in Havana in 1933.  The present photographs, printed in Cuba by Evans in 1933, are among the earliest prints of these iconic images, based on comparison with later printings.  The collection includes variants of known images as well as rare images by Evans.  “Hemingway went to Spain to learn to write, for Evans it was on the streets of Havana that his style and subject meshed and he found his own way as a photographer.  Havana was Spain for Evans.  As we shall see it was also his Paris.”

The owner consigned the material in the expectation it would achieve a magnificent price but reality interceded, and the material in time became stale.  Subsequently  the consignor passed away and his heirs sent the collection to Doyle, New York who sold it for $163,800 against the estimates $200,000 - $300,000.  It was purchased by a savvy collector.

Revisiting the 2017 catalogue the collection looks to be quite valuable and important and, if the asking price was originally twice its ultimate auction realization, it seems likely it would have sold.

But, when dealers are handling consignments the owner controls the asking price and, even after their best efforts to develop a transaction with several institutions the high asking price was a bridge too far.

What I have taken away from this story is that asking prices have to be logical to generate interest and engagement.  When the price was deemed too high, the material foundered and became old news and lost its shelf appeal.  Later when life interceded, the very same material went into the rooms and brought less than it would have if the original asking price had been $400,000.

The dealer presentation was superb and Doyle relied on it.  Consignors, trust your dealers and let them set the prices.  Often, when you ask too much you obtain much less.