The History of Jamaica 1494-1838 by Thibault Ehrengardt – This Book Captures Its Tragedy, Brutality, Pirates, Revolts, and Earthquake, All Sweetened by a Massive Dose of Sugar 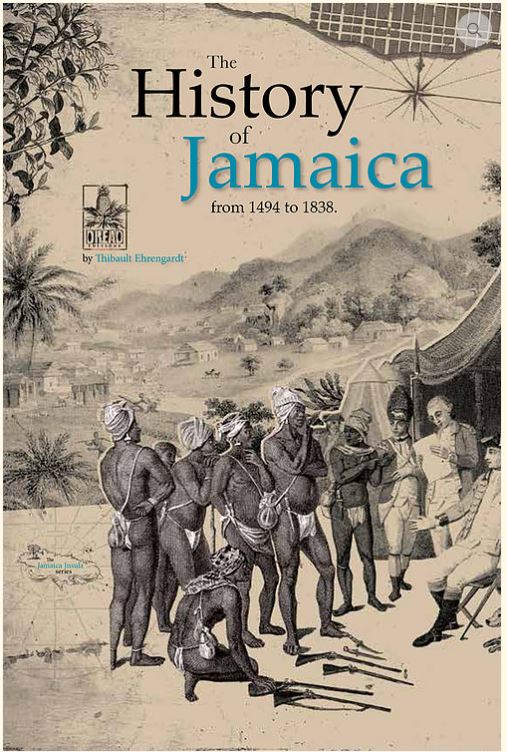 History of Jamaica by Thibault Ehrengardt.

Many of our readers have been enjoying and learning from the essays written by our French correspondent, Thibault Ehrengardt. Enhrengardt writes of both events current in the book world and reviews of antiquarian works from his homeland. Certainly, one of the most notable learnings from these old works is how fortunate we all are not to have lived in the 18th century. We may see France as a sophisticated, liberal and enlightened country today. That was not always the case.

What you may not know is that M. Ehrengardt has written numerous books. Perhaps his favorite subject is not France, but Jamaica. That may seem surprising. Jamaica was once Spanish, once British, but was never a French colony. Nevertheless, if you have an abiding love of reggae music, you are not going to find its roots in Algeria, nor even Haiti. That can only take you to Jamaica, a journey Ehrengardt has made many times. Ehrengardt ran a European magazine on reggae music a few years back. What he learned while there extended far beyond the borders of modern Jamaican music. He learned enough to write a history of Jamaica, at least three and a half centuries worth of it through 1838. While naturally it is available in French, it is also now available in English. Ehrengardt can write fluidly in either language, two more than many of us can.

The title of Ehrengardt's book is The History of Jamaica from 1494 to 1838. The year 1494 was a major turning point in Jamaican history. The land had been settled a few millennia earlier by the Arawak or Taino people, traveling from the South American mainland. They had settled villages throughout the island, primarily near the coast. All that changed with the arrival of Christopher Columbus on his second voyage in 1494. Columbus would bring with him killing, brutality, forced labor, and disease. Welcome to the civilized world. So began the colonial era. The natives were practically wiped out within a few decades. With the addition of slaves forced from Africa, a new native population would arise.

Jamaica would not become a major colony for the Spanish. She controlled most of South America, Central America, and southern North America. Portugal got Brazil, Britain and France got the rest of North America and a few crumbs. The remainder was Spanish. Jamaica was just a drop in the bucket. Some settlers arrived, and of course there were slaves, but Jamaica was not a major Spanish colony. In 1655, the British attacked Hispaniola, hoping to seize that large island from the Spanish. They failed. It was too well defended, and they suffered an ignominious defeat. They needed to do something to save face, so they turned to the poorly defended island of Jamaica. There, they were successful.

The British period would be noted for sugar, slaves, and pirates. The early part would feature the colony as a haven for pirates, often made "privateers," working with the cooperation of the British government. Jamaica was a safe port. In return, the privateers protected the colony from the Spanish and gave some of the loot they stole to the crown. As this behavior became less acceptable internationally, the British brought in slaves, quite literally by the boat load, to work the sugar plantations. In time this too became socially unacceptable. First, Britain banned the slave trade, and later, slavery itself. In 1838, the year this history ends, the slaves were granted their freedom.

That is the condensed version of the history of Jamaica from 1494-1838. For the details, you will need to see the book. Henry Morgan and his fellow "respectable" pirates, the terrible Port Royal earthquake of 1692, and the many attempted slave uprisings dot the landscape. Plantation owners, descending to the depths of the brutality their system produced, use newer African slaves to fight the descendants of previously freed Spanish slaves, the Maroons. Little good ever came of slavery. For Jamaica, its sugar produced a bitter aftertaste.

Rather than taking the latest history and moving on from there, Ehrengardt turns to the original sources, books and manuscripts written by contemporaries centuries ago. As readers of his articles here well know, Ehrengardt's strength is in digging up old and forgotten sources to bring their times back to life. As an outsider, from a country that was never intimately involved in the country's life, he is able to tell the stories of the many participants free from the influence of personal connection. It has been a long time since the history of Jamaica was written in the neutral country of France, the last such book going back to 1751. This book is definitely due.

You can purchase The History of Jamaica from 1494 to 1838 on Amazon. Here is a link:  Jamaica. If you search Thibault Ehrengardt's name, you will also find two other titles concerning more recent events in Jamaica by the author available on Amazon, The Gangs of Jamaica and Jamaican Greats. Meanwhile, Ehrengardt is finishing up a new book, and this one takes us to Paris rather than Jamaica. It is based on Le Tableau de Paris, by Louis-Sébastien Mercier. It was published in 1780 and provides a look at the seamy side of Paris in the days before the Revolution. For a teaser of what is to come, you can see two articles Ehrengardt wrote for Rare Book Monthly on Mercier and his book. Click here and here.