U. S. Supreme Court to Rule on Attempt to Seize Ancient Persian Tablets from the University of Chicago's Oriental Institute 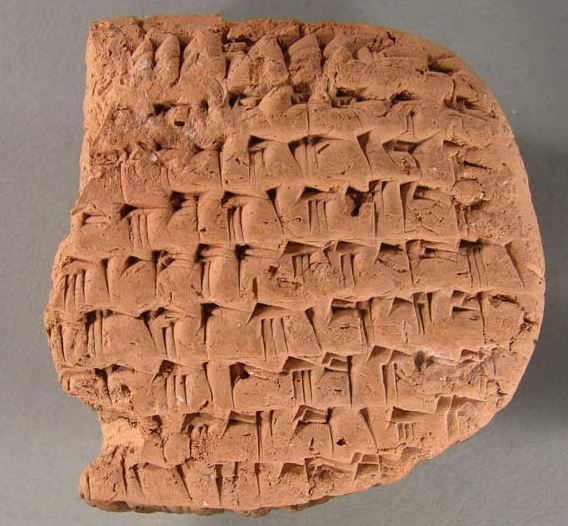 An ancient clay tablet from Persepolis (University of Chicago photo).

This is the month where the earliest "books" - ancient clay tablets – make their way into the news, legal news in particular. Not only was a settlement reached in the Hobby Lobby case (see article elsewhere in this issue), but the U. S. Supreme Court agreed to hear a case involving ancient tablets owned by the government of Iran, but in the possession of a Chicago university since the 1930's. It is one of the rare cases where U. S. and Iranian thinking is aligned.

The case begins in 1997 under the most awful of circumstances. Some American tourists were visiting Israel when a suicide bomber detonated his arsenal, killing five Israelis and wounding several Americans. Hamas, the Palestinian terror organization that controls Gaza, claimed responsibility. Iran provides financial and other assistance to Hamas. With no chance to collect damages from Hamas, the Americans sued Iran in an American court. They were awarded a judgment against Iran in the amount of $71 million.

Iran didn't respond to the lawsuit. It did not recognize the right of U. S. courts to adjudicate claims over something that did not happen in America. So, the lower court ruled for the Americans, awarding them $71 million Iran had no intention of paying. That is when the Americans went back to court to seize Iranian property. Most property of the Iranian government was removed from America long ago, but the American plaintiffs discovered these very valuable ancient writings belonging to Iran were still in possession of the University of Chicago's Oriental Institute. The tablets came from Persepolis, the ancient capital of Persia. They were on long term loan since discovered by University of Chicago archaeologists in the 1930's. Iranian-American relations were better back then. The institute has been deciphering and studying them ever since, slowly returning pieces as they concluded their work. Despite the complete break down of government relations between the two countries after the Iranian Revolution in 1979, scholars and institutions are still able to cooperate with each other.

The Americans also sued to seize some antiquities held by Chicago's Field Museum of Natural History. The Field purchased these in the 1930's, but the Americans claimed that they were stolen and smuggled out of the country all those years ago, making them still property of the Iranian government.

There is a doctrine known as Sovereign Immunity which applies to most cases of this sort. It prohibits citizens from suing foreign governments in their home country. The reason is clear – much mischief can happen if a nation constantly has to defend itself in foreign courts from complaints by individual citizens. To look at it from the other side, someone from, say, Germany or Korea or Qatar could sue the American government because they were injured in Syria when American planes bombed there, and and then attempt to seize our military bases in those countries as compensation. This is why the American government has aligned itself with Iran in this case. It doesn't like the precedent.

However, in the age of terrorism, Congress still wanted to punish countries involved in state sponsored terrorism. So, it passed an exception to the sovereign immunity act. It said Americans could sue another country if they were victims of terrorism. That was the Americans' claim.

Initially, the lower court ruled that sovereign immunity did not apply because the Iranian government did not show up in court to plead it. Use it or lose it. The institutions holding the tablets pleaded sovereign immunity on behalf of Iran, and the U. S. government filed a brief supporting the claim, but the court said no, only Iran could make that claim and it failed to do so. The plaintiffs then sued to collect their $71 million by seizing the assets being held by the institutions. This time, Iran showed up.

Still, this did not guarantee that the plaintiffs could actually collect Iranian assets. The statute provides that only assets used for commercial purposes can be seized. So, the plaintiffs' lawyers came up with a clever end-around. They demanded Iran tell them about all assets they owned in the United States, since they had consented to American jurisdiction by showing up. This way, if the institutionally held items were found not to be used for commercial purposes, the plaintiffs hoped to locate other assets that were. Iran said no thank you.

On appeal, the higher court said no, Iran could not be compelled to to turn over lists of everything it owns in America, and, since the presumption is that sovereign immunity applies, the plaintiffs must prove an exception, rather than Iran being obligated to come to court and prove it applies.

The case went back to a lower court, and this time, that court ruled that the commercial exception to the sovereign immunity rule did not apply to the Persian tablets, so it awarded judgment to Iran. The Americans appealed, arguing that since the institutions were using the collections commercially, the commercial exception did apply. Again the appeals court said no, that the state itself must be the one using the assets commercially. However, a different appeals court in another case ruled differently on another matter, so to straighten this out, the Supreme Court will now take up the case. Only the Oriental Institute case will be heard, the Field Museum claim having been dropped.

Rather than determining whether the assets are commercial, the decision will be made on the basis of the other court's conclusion that the distinction between commercial and non-commercial use does not apply in the case of the terrorism exception to sovereign immunity. If the Supreme Court rules that it doesn't matter whether the property was used commercially, the American plaintiffs may yet get to take the ancient tablets from the Oriental Institute almost a century after they arrived and put them up for sale at auction.

As much as I sympathize with the plaintiffs' plight, this just doesn't sound right. It should be noted that such a remedy is likely to work only once. Anything else owned by Iran, or other countries that might feel threatened, will quickly be repatriated. Studies and displays such as those in Chicago, that have survived political animosities, will no longer continue. Meanwhile, retaliation on the part of those countries can be expected. A similar standoff is going on between the U.S. and Russia now. Chabad-Lubavitch, the Hasidic Jewish movement, won a verdict in a U. S. court that books they once owned years ago but are now held by and in Russia, should be returned to them. Russia had loaned seven of the books to the Library of Congress, whom the U. S. court ordered seized. The result is that Russia no longer loans such artifacts to anyone in the U. S. for exhibitions, and the U. S. does the same with Russia. Now, all but the one winner are losers. Diplomacy and legal claims are more suitable to being handled by nations, which can consider all of the ramifications to their national interests, than by individuals whose personal interests may be inconsistent with those of the country as a whole.