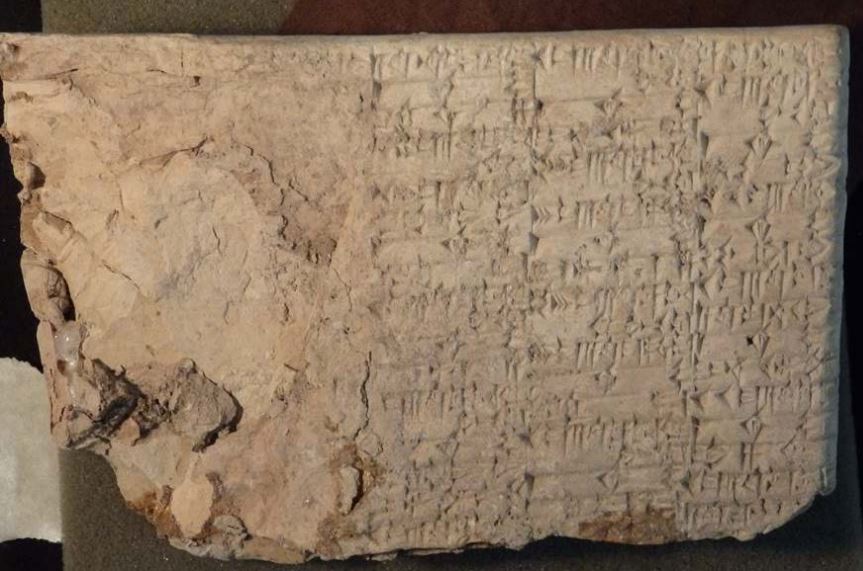 One of the cuneiform tablets (Department of Justice photo).

A settlement has been reached in a smuggling case involving approximately 5,500 items from antiquity, some of the earliest "books" created, cuneiform tablets from the "cradle of civilization," today known as Iraq. In the bizarrely titled case entitled United States of America vs. Approximately Four Hundred Fifty (450) Ancient Cuneiform Tablets and Approximately Three Thousand (3,000) Ancient Clay Bullae, the items (including some others from antiquity) have been seized and a $3 million fine assessed. Despite the case name, it was not the tablets and bullae that were charged with wrongdoing. Rather, it was the large retailer of arts and crafts items, Hobby Lobby. These are not the sort of items sold in their stores, so how did Hobby Lobby get involved in the smuggling of illegal-to-import cultural artifacts, likely stolen, from another country?

Hobby Lobby, despite its size, is not a public corporation. It is owned by the Green family of Oklahoma City. The Greens are devout, some might say zealous Christians. They have funded the estimated $400 million construction of the 160,000 square foot Museum of the Bible in Washington, scheduled to open later this year. They have assembled a large collection of Bibles and related material, much of it of substantial value. It is not surprising they would have a keen interest in writings going back to biblical times. Presumably, much of their collection will make its way to the museum. Whether that was to be the eventual destination of these ancient tablets and bullae is not clear.

U.S. law provides that it is a violation to import cultural objects illegally removed from Iraq since 1990. Since Iraqi law has provided since 1936 that it is illegal to remove any such objects from the country, clearly any cultural objects removed from Iraq post-1990 may not be imported into the United States. Those removed prior to 1990 may be eligible for importation, though other rules may apply, particularly if they were stolen. Hobby Lobby's claim was that it was informed the items were legally acquired in the 1960's. However, the circumstances of their purchase and importation led to much questioning whether someone at Hobby Lobby must have known, or clearly should have known better. Sanctions apply not just for knowingly importing cultural objects fraudulently obtained, but also "for which a reasonable suspicion exists." Naturally, ignorance of the law is no defense either.

The circumstances were described in the U.S. Attorney's pleadings. In the summer of 2010, the President of Hobby Lobby and a consultant went to the United Arab Emirates to inspect approximately 4,500 items from antiquity. They met with two Israeli dealers and one from the UAE. Despite the value of the material, it was spread around the floor, on a coffee table, and in loosely packed cardboard boxes, often with little or no protective layers between pieces. The dealers then proposed an even larger sale, bringing the number of items to just over 5,500.

Later in August, the Consultant reported to the President and the President's Executive Assistant that the two Israeli dealers informed him the material was owned by a third Israeli dealer. For reasons not clear, the items were allegedly housed in the United States, but shipped to the UAE for inspection. The stated offering price was $2,091,000. The Consultant said he believed they could be appraised for $11,820,000, but also believed the purchase price could be negotiated down to $1,600,000. Israeli Dealer #1 followed up with a provenance statement from Israeli Dealer #3 that his father had legally acquired them in the 1960's from local markets. In the 1970's, he said they were shipped to Mississippi and placed in the care of a custodian. Hobby Lobby made no attempt to contact the alleged custodian to verify the claim. In reality, the alleged custodian never possessed the antiquities, nor even met Israeli Dealer #3 prior to 2007.

In October, the Expert provided Hobby Lobby's In-house Counsel with a memorandum. Part of it read, "I would regard the acquisition of any artifact likely from Iraq as carrying considerable risk. An estimated 200-500,000 objects have been looted from archaeological sites in Iraq since the early 1990s; particularly popular on the market and likely to have been looted are cylinder seals, cuneiform tablets..." The memorandum went on to say that such items were likely to be stopped by Customs, and that improper declaration of country of origin could lead to seizure and forfeiture of the object. It also advised checking on previously imported items to confirm country of origin was properly declared. The memo continued that importing cultural property looted from Iraq after 1990 could lead to criminal penalties and fines. The U.S. Attorney's pleadings said this memorandum was not shared by In-house Counsel with the President, Consultant, Executive Assistant, or anyone else involved with the purchase and importation of the items.

Nevertheless, Hobby Lobby made the purchase for $1.6 million, the invoice stating the seller was Israeli Dealer #3, whom no one from the firm had met, and that the artifacts originated in Israel, though they did not. The $1.6 million was then wired to seven different bank accounts associated with five separate individuals, none of whom was Israeli Dealer #3. Rather, it was Israeli dealers #1 and #2, the UAE dealer, and two others.

In November, the employee tasked with receiving the items ("Curator") contacted Hobby Lobby's International Department and Executive Assistant to arrange for shipping. The International Department recommended using their customs broker. However, after the broker cautioned the CBP (U.S. Customs and Border Protection) might detain the material, the Curator and Executive Assistant had Israeli Dealers #1 and #2 handle the shipping.

Later in November, though prior to the execution of the purchase agreement, the UAE dealer began shipping the artifacts. Numerous "errors" were made. The first package was labeled "ceramic tiles." No formal entry was made with customs, though such is required for goods exceeding $2,000 in value, as clearly was the case here. In mid-December, three more packages were shipped, listed as "Tiles (Sample)." Country of origin and value were unstated. They were addressed to the President or Executive Assistant. Some were sent to Hobby Lobby, others to two related companies in Oklahoma City. Shipments continued, sometimes without required details, other times false, including wrong country of origin or false value. At one point, the Executive Assistant emailed the UAE dealer that as long as the value of packages were kept under $2,000, they would not have to clear Customs. Obviously, that would have been difficult considering the value of the items being shipped. Still, many were declared to have a value of only $250 or $300.

The items were shipped via Fedex, and about January 3, 2011, Customs inspected one of the packages. It was labeled "hand made clay tiles (sample)." They weren't. Nor were they manufactured in Turkey or worth only $250 as stated. The invoice also listed the UAE dealer as the seller.

Four more shipments were intercepted and inspected and "errors" were found with them too. On January 19, CBP seized the packages, which contained 223 cuneiform tablets and 300 clay bullae.

Hobby Lobby explained the reason payments were made to multiple individuals was because they were the original owners. However, this is inconsistent with the provenance statement that it all belonged to Israeli Dealer #3's family, which established the supposed legitimacy of their ownership.

Hobby Lobby consented to the forfeiture of the goods and to paying $3 million to resolve the civil action. They also agreed to provide the government with quarterly reports of purchases of cultural items for the next 18 months and provide some sort of sensitivity training to its personnel. Hobby Lobby President Steve Green published a statement saying, "We should have exercised more oversight and carefully questioned how the acquisitions were handled. Hobby Lobby has cooperated with the government throughout its investigation, and with the announcement of today’s settlement agreement, is pleased the matter has been resolved."

The Company statement explained, "The Company was new to the world of acquiring these items, and did not fully appreciate the complexities of the acquisitions process. This resulted in some regrettable mistakes. The Company imprudently relied on dealers and shippers who, in hindsight, did not understand the correct way to document and ship these items. However, since learning of these errors, the Company has been an active participant with the government’s investigation and supports its efforts to protect the world’s ancient heritage. At no time did Hobby Lobby ever purchase items from dealers in Iraq or from anyone who indicated that they acquired items from that country. Hobby Lobby condemns such conduct and has always acted with the intent to protect ancient items of cultural and historical importance."

Somehow, the alleged naiveté and blame shifting just doesn't sound right. It's hard to fathom how it all could be a case of mistakes and misguided trust on everyone's part. Did no one at Hobby Lobby even wonder about all the "errors," many of which, such as content and price labeling, repeated over and over, were obviously false? Not "understanding the correct way to document an item" might lead to mistakes in filling out a form, but mistaking precious, ancient cuneiform tablets for new tile samples? How about the Expert's warning, the Custom Broker's warning, the astonishing bargain price, or the strange method of multiple payments to separate people and shipments to multiple addresses? It seems hard to imagine that no one at the company was even suspicious, or that the company made a thorough investigation designed to root out the truth. The indicia of fraud were just too obvious for such a benign explanation to sound plausible.

A statement from the U.S. Attorney's office, attributed to Special Agent-in-Charge Melendez, states, "The protection of cultural heritage is a mission that HSI [ed. note: Homeland Security] and its partner U.S. Customs and Border Protection (CBP) take very seriously as we recognize that while some may put a price on these artifacts, the people of Iraq consider them priceless." Perhaps, but this action, if this is all there is, is not that much of a deterrent. Hobby Lobby forfeited the $1.6 million they paid for the artifacts plus paid a $3 million fine, for a loss of $4.6 million. Meanwhile, Hobby Lobby did an estimated $4 billion in sales last year. Forbes Magazine estimated its CEO, David Green, to be worth $5.5 billion. The fine effectively amounts to nothing at all. If this is all there is, Hobby Lobby does indeed have much to be thankful for.