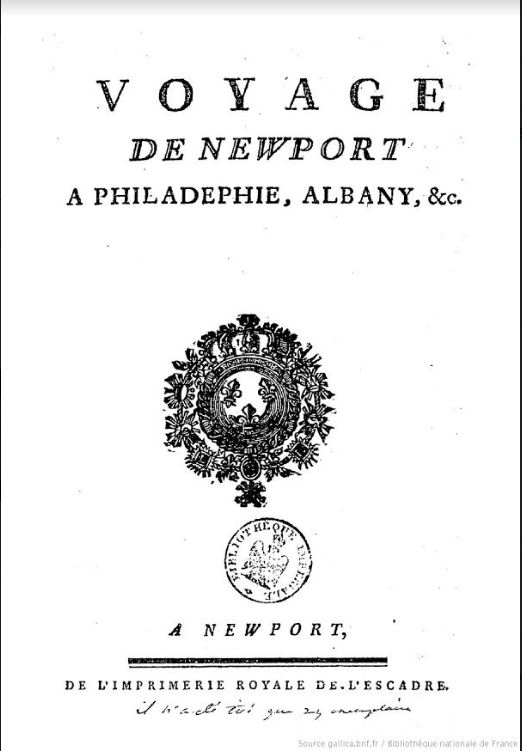 Why is Chastellux much ignored today? wonders the Duke of Castries. Well, in 1786, Jacques-Pierre Brissot de Warville published a 89-page pamphlet (Philadelphia), entitled A Critical Examination of the Marquis de Chatellux's Travels in North America... The sub-title reads: “...in a letter addressed to the Marquis; principally intended as a refutation of his opinions concerning the Quakers, the Negroes, the people, and mankind.” Indeed, the way our traveller casually passed judgement on everything and everyone around him was resented by some—including a few of his hosts.

At one point, Chastellux met a Quaker named Benezet. “Wholly occupied with the welfare of mankind,” he says, “his charity and generosity made him be held in great consideration.” Monsieur le Marquis seemed to enjoy his company, but all of a sudden comes the spanking: “The law observed by many of them (the Quakers—editor’s note) of saying neither “you”, nor “Sir”, is far from giving them a tone of simplicity and candour. I know not whether it be to compensate for that sort of rusticity, that they in general assume a smooth and wheedling tone, which is altogether Jesuitical. Nor does their conduct belie this resemblance; concealing their indifference for the public welfare under the cloak of religion, they are sparing of blood, it is true, especially of their own people; but they trick both parties out of their money, and that without either shame or decency. It is a received maxim in trade to beware of them, and this opinion, which is well founded, will become still more necessary.”

Hypocrisy was probably a component of the Quakers society to a certain extent, but they were the first to stand against slavery in America. A noble cause? Well, not in Chastellux’s view. As the battle for abolition was raging in Europe and in the West Indies, the Marquis took (the wrong) side. “The more we regard the Negroes, the more we must be persuaded that the difference between them and us, consists in something more than complexion. As for the best, it cannot be denied that it is a very delicate point to abolish slavery in America. The Negroes in Virginia amount to two hundred thousand. (...) They would unquestionably form a distinct people from whom neither succour, virtue, nor labour, could be expected. (...) In the present case, it is not only the slave who is beneath his master, it is the negro who is beneath the white man.”

Mr de Chastellux then came to the conclusion that there was no other way to abolish slavery but to get rid of the Negroes. How? Gradually, he says. “The best expedient would be to export a great number of males, and to encourage the marriage of white men with the females (...). This commerce between the white men and negresses, could not fail of giving birth to a race of mulattoes, which would produce another of Quarterons, and so on until the colour should be totally effaced.” Yes, you read it right. Chastellux simply suggests eliminating an “inferior race” through eugenics—and suddenly, he becomes less funny.

Talking about slavery, it is absolutely necessary to put things back into perspective. Passing judgement on Chastellux in accordance to our current standards would be unfair. First of all, the term “eugenics” didn’t exist at the time. Then, this valuable book can’t be reduced to that short passage, and it is not our intention to rewrite history. Unfortunately, Chastellux was a brilliant man, as well as a very eloquent one; and it only made his statements worse in a time when the abolitionists were desperately fighting against the slave trade. Of course, many brilliant minds of the time genuinely thought that Black people were inferior, and yes, economics was the main concern of many abolitionists. Yet, the condition of the slaves was commonly deplored—even if as a “necessary evil”—, and only the most radical would deny them the name of men; and none was to be found among the “wheedling” Quakers. “In vilifying the Quakers, you may prevent the good effects of their pious example,” Warville writes to Chastellux in his pamphlet. “In refusing the name of men to the Negroes, you give your sanction to the treating them like beasts of burthen, if not to the spilling of their blood. (...) In making the people contemptible, you invite their oppressors to rivet their chains.” As a matter of fact, these chains were not taken off before a hundred more years in America. Monsieur le Duc de Castries, if you are still wondering why Monsieur le Marquis de Chastellux is not unconditionally praised today, we may have a clue...