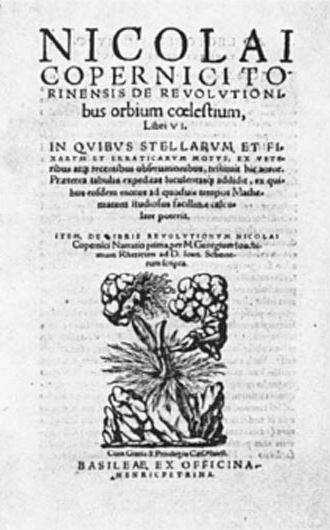 Title page from a different copy of Copernicus' groundbreaking book.

In what must be the most audacious book theft since the Director of Italy's Girolamini Library stole thousands of antiquarian books under his care, thieves broke into a London warehouse on the night of January 29-30 and made off with 160 books destined for the California International Antiquarian Book Fair. The estimated value of the books is $2-$3 million. The books were in a temporary stop near Heathrow Airport, being transported by three European dealers to the fair in Oakland. They never made it.

The method by which the books were stolen was most remarkable. It also raises all sorts of questions. Three thieves climbed onto the warehouse roof and proceeded to cut an opening around a skylight. They then rappelled down ropes 40 feet to the floor below. The advantage of this unusual method of entry was that they were able to evade the security motion sensors by doing so.

Next they went to four particular containers which they pried open. From there, they began pulling out books and running them against a list. The ones on the list were set aside, the others discarded. The ones they wanted were then placed in boxes which were hauled back up to the roof by the ropes. Then, the books were lowered from the roof via ropes and placed in a van. Once the job was complete, the van drove away.

Police know the sequence of events because it was all captured by security cameras. That video has not yet been released to the public.

One dealer lost an estimated $850,000 worth of books. The book with the highest estimate is a second edition of Nicolaus Copernicus' De Revolutionibus Orbium Coelestium, published in 1566. This book is notable for first espousing the theory that the earth revolves around the sun, not the other way around. It was estimated to be worth around $270,000. That might be a bit generous, but it is a very valuable book. Other valuable books included early editions by Galileo, Newton, and Dante.

A complete list of the missing books can be downloaded from the ILAB website by clicking here.

Two things immediately struck police and the victims about this theft. One is that the thieves had a list of precisely what they wanted. They took nothing from the warehouse but books, and showed no interest in anything else. And, from the containers of books, they followed a specific list, taking only a pre-selected group of books. Others, many of which were likely to have been of value too, were left behind. They knew what they wanted and took nothing else.

Next, the dealers were well aware of the difficulty the thieves would have in reselling these books. Stolen book databases are readily available to dealers and collectors at a high level. No dealer or collector is going to buy a $200,000 book from someone off the street without performing the kind of research that would quickly reveal the book to be stolen. They are too rare to readily be shopped, even to a dealer in another country. Any thief with the knowledge to be so selective would surely be aware of that. Police did not publicize the theft widely at first, evidently hoping the books might show up at a shop, but that has not happened.

Speculation is they were stolen on behalf of a particular collector, who obviously plans to keep his collection secret. It seems that would take much of the fun out of collecting, being unable to share the collection with friends, but there have been people who have built collections of stolen books they never shared with anyone, the truth only discovered after they died. One such case was revealed in England only a few months ago where a man who recently died was discovered to have some books in a locked cabinet stolen from the London Library in the 1950's (click here to see the story). However, these books were not nearly as valuable as the ones destined for California.

Not yet publicly discussed to our knowledge is that this must in some way be an inside job. Someone associated with either one or more of the dealers, the warehouse, the shipper, perhaps an insurer of the books or someone with knowledge of what was planned to be displayed, must have been involved. The thieves didn't break into a random warehouse and grab some stuff. They knew exactly what would be in there and when. That must have come from someone with knowledge, either accidentally or intentionally revealed. It also would appear that someone must have had knowledge of the inside of the warehouse to know where to find the books and how to evade the motion sensors. Perhaps the fact that there must be some sort of inside connection is what will eventually lead to their downfall. Police have a starting point.